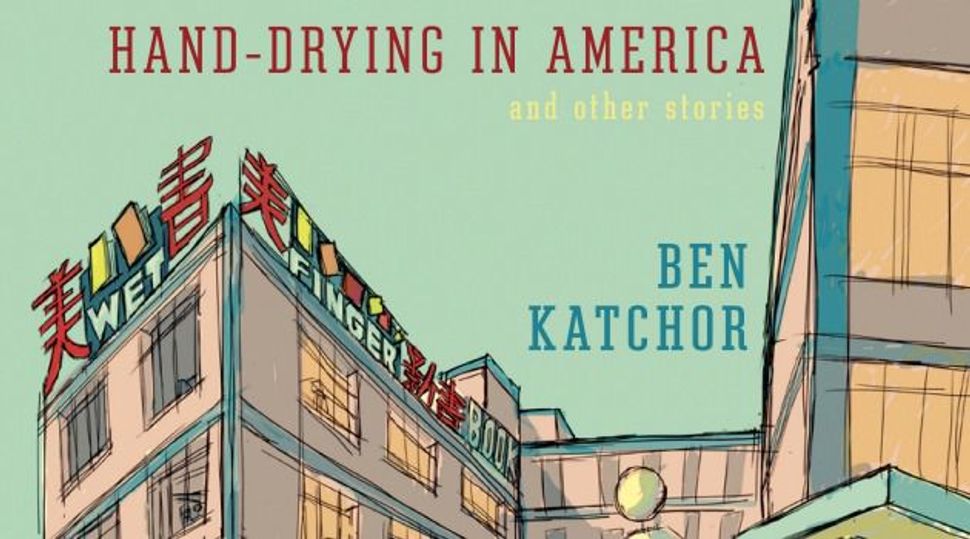 Katchor In The Wry: The artist?s new collection features the visually spectacular work he has done for Metropolis Magazine. Image by Courtesy of Random House

Ben Katchor knows well that the city is an incredibly weird place. Specifically, it’s a place where weirdness has accumulated over time, propelled by the endless cycle of commercial solutions to urban problems and by the new problems the solutions create. That insight underscored Katchor’s long-running Forward comic strip — originally called “Julius Knipl, Real Estate Photographer,” later various other names — which was usually set in the demimonde of dry-cleaning operations, dry-goods wholesalers, resource-parched municipal agencies and the perpetual scrabble for some kind of new business niche. In one of the greatest strokes of genius in the history of comic strip syndication, when “Julius Knipl” was dropped from The Village Voice in the mid-1990s, Katchor exhibited his new strips in a vitrine attached to an Upper East Side papaya-and-hot-dog spot. It’s the kind of plan that might have been the payoff to one of his own “picture-stories” — his preferred term.

Since 1998, Katchor has contributed a monthly full-color page to the big square design-and-architecture magazine Metropolis, of which the visually spectacular run to date is collected here. The Metropolis stories have no recurring characters; they’re also much more about the buildings and objects that facilitate life in the city. (And by “the city,” he means the city: Although Katchor usually comes up with names along the lines of “Saltine Avenue” or “The Nigh Building” or “Herminal Heights,” he’s pretty clearly always talking about New York.)

Katchor’s forte is nudging a real-life absurdity one or two notches too far, which means that these stories occasionally mock an actual architectural trend. (“Our deep-water bathtubs descend through the building’s foundation into the aquifer below and onto an unknown depth…. These tub shafts were drilled in the night by a succession of private contractors and so no one knows for sure how deep they are.” “Are they porcelain all the way?”) The best joke here may be “The Price of Tassels,” in which a corporation, in search of greater productivity, redesigns its drab, stifling offices to look in every way like a 1970s-style Chinese restaurant. (“The natural light is filtered through layers of heavy red drapery, neon signs and dust.”)

More often, the wit in “Hand-Drying in America” comes from tweaking the way the solid materials of the city outlast the transient urges they satisfy. In one strip, Katchor introduces “the Brotherhood of the Immaculate Consumption,” which destroys possessions that lack sentimental value and whose original purchasers have died; in another, he invents a history of built-in tissue dispensers; in a third, he hypothesizes that sterile cash-machine storefronts might become social nexuses if only they would incorporate public restrooms.

“A Check-room Romance” may be the best-remembered story here: Katchor and Mark Mulcahy adapted it into a musical theater piece in 2009. It’s a trifle of an idea (a man loves coat-check rooms so much that he adds one, complete with an attendant, to his own apartment), but its 14 panels slyly make the point that shared experience can be so seductive that its impositions can seem like benefits. And “Window Dressing” is less a satire than a pointed observation: Katchor notes that, as a consequence of retail outlets with elegant window displays being replaced by chain drugstores that dump stuff haphazardly behind their windows, “the great illusions of consumer desire have finally been dispelled… and still the impulse to buy survives.”

It’s unsurprising that Katchor’s artwork has a peculiar, well-entrenched architecture of its own. Nothing he draws or writes can be mistaken for anything but the work of his hand, with its upward-sloping dialogue and ragged-straw linework. His characters are permanently squinting and crouching, with a look something like sun-warped tailors’ dummies. One of the Metropolis strips’ signature visual gestures — a central panel that’s twice as tall as the images on either side of it — is nearly unique to Katchor. Few other artists would dare risk the possibility of creating a confusing reading order, but he pulls it off every time; it’s just what he does, in much the same way as odd little built-in metal cabinets beneath kitchen windows (which he eulogizes in “Name Dropping”) are simply a feature of old New York City apartments.

Still, the tone of “Hand-Drying in America” changes, subtly but unmistakably, when it reaches the “Metropolis” strips from the past couple of years — a shift that coincides with Katchor switching from drawing in pen and ink to working on the now-omnipresent Cintiq electronic drawing tablets. It’s the sort of technological intrusion on inefficient but time-honored ways that Katchor has mocked again and again; curiously, the electronically drawn episodes are much more concerned with death.

“I see myself as being very marginal to the culture,” Katchor said in an interview with the scholar and author Derek Royal in the book “Unfinalized Moments.” “I think that there are only a few thousand people in the U.S. who would be interested in my work.” That seems like an exceptionally modest self-assessment from a cartoonist who’s been awarded both a MacArthur “Genius Grant” and a Guggenheim Fellowship. But it could also be an aspirational statement: The parts of culture that his work valorizes are the ones that have found their particular margin and attached themselves to it for keeps. As one of his characters might say, you could do a lot worse.

Douglas Wolk is the author of “Reading Comics: How Graphic Novels Work and What They Mean” (Da Capo Press, 2007).