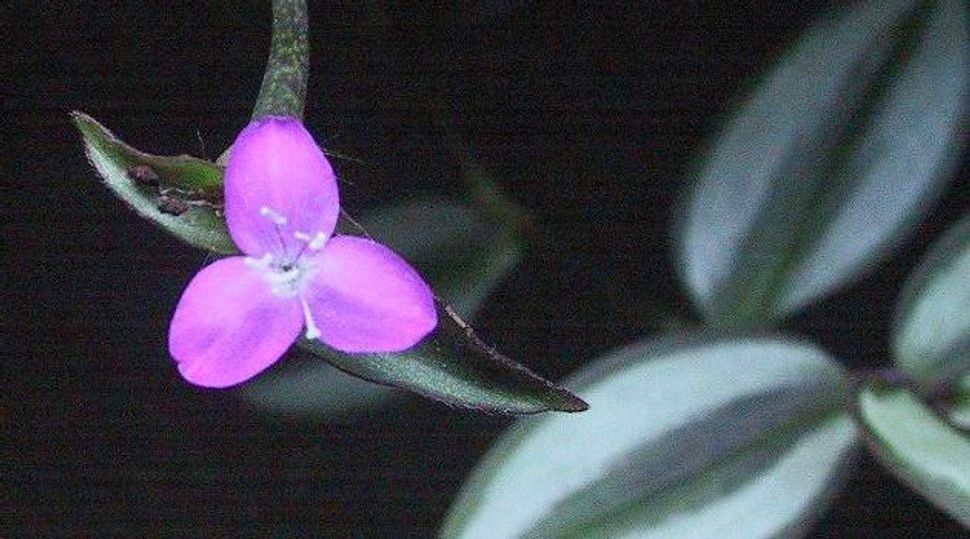 Call Me a Wandering Jew: Tradescantia zebrina?s more common name relates back to an old Christian legend that first cropped up in Europe in the 13th century. Image by Wikimedia Commons

What’s purple, crawls without legs, and is of the Mosaic persuasion? I hope you give up, because if you’re still trying to guess, I shouldn’t be telling you that it’s a Wandering Jew.

Where mine originally came from, I have no idea. I only know that it’s been in my garden for a long time, growing in pots that I’ve stuck it in and in a few places where I haven’t.

I didn’t get it as a gift and I certainly didn’t buy it, because what nursery would bother to sell a plant any leaf of which, particularly if attached to a bit of stem, will start growing almost anywhere by itself? As far as I can tell, it simply wandered in from somewhere and stayed.

Its official name is Tradescantia zebrina, which doesn’t sound very Jewish, and it doesn’t look very Jewish, either. It has elongated, thick, purplish-red leaves of a rubbery consistency that grow on a similarly colored, creeping stem, which is so delicate that it breaks in two if you do much more than look at it crossly.

If in contact with moist earth, the broken-off part will then begin to root — which doesn’t in itself explain how Wandering Jew gets very far. My own guess is that it’s helped by disgusted gardeners who, tired of seeing it self-amputate every time they brush against it, pick up the fallen segments and fling them, angrily, as far as they can.

Does this sound a little like history’s repeated banishments of the Jews and of the ease with which they have settled down in new places until banished again?

If it does, that’s no coincidence, the connecting link between Jewish history and Tradescantia zebrina being the old Christian legend of “the wandering Jew” that first cropped up in Europe in the 13th century.

Probably the earliest version of it can be found in the Englishman Roger of Wendover’s “Flores Historiarum” (c. 1228), which relates how the author met a visiting archbishop from Armenia who told him the following story: “Cartaphilus, a porter of the hall in [Pontius] Pilate’s service, as Jesus was going out of the door [on the way to his crucifixion], impiously struck him on the back with his hand and said in mockery, ‘Go quicker, Jesus, go quicker! Why do you loiter?’

And Jesus, looking back on him with a severe countenance, said to him, ‘I am going, and you will wait till I return.’

And according as our Lord [Jesus] said, this Cartaphilus is still awaiting his return. At the time of our Lord’s suffering he was 30 years old, and when he attains the age of a hundred years, he always returns to the same age as he was when our Lord suffered…. He is a man of holy conversation and religious, a man of few words and circumspect in his behavior, for he does not speak at all unless when questioned by the bishops and religious men; and then he tells of the events of old times and of the events which occurred at the suffering and resurrection of our Lord.”

In Roger of Wendover’s version, the oddly named Cartaphilus, also known as Joseph, does not wander, but simply lives forever while awaiting Jesus’ second coming. Nor, despite his affront to Jesus, is he depicted negatively, having repented of his deed and become a pious Christian.

Yet in many of the dozens of later versions of the story that occur in European folklore and literature, Joseph — also called Ahasuerus, Mattathias and Isaac Laquedem (a French garbling of the Hebrew for “Ancient Isaac”) — is portrayed, sometimes anti-Semitically, as a wretched outcast driven from place to place in eternal punishment for mocking Jesus on his way to the cross.

This image of him undoubtedly owed something to the repeated expulsion of the Jews from various European countries in the Middle Ages, and actual sightings of the poor fellow in person, his long white beard trailing to the ground as he strode doggedly onward with his walking stick, were reported over the centuries.

Just when “Wandering Jew” became a name for Tradescantia zebrina, or in what language this first happened (the plant is also known as juif errant in French, hebreo errante in Italian, judío errante in Spanish and ewiger Jude in German), is not very clear.

Since Tradescantia zebrina’s native grounds are in Mexico, this couldn’t have been before the first arrival of New World plants in Europe in the 16th century, but it may have been much later. The earliest documented botanical uses of “Wandering Jew” in English date to the 1880s but refer to two unrelated species: Linaria cymbalaria or ivy-leaved toadflax, and Saxifraga stolonifera or creeping rockfoil, both also rapidly spreading ground-huggers. Plant names, it would seem, have a way of wandering, too.

Should we be complaining to the Anti-Defamation League about “Wandering Jew” or campaigning to have it called by one of its other English names, such as Purple Queen or Purple Heart? I think not.

It’s a very pretty plant, especially when hanging in richly hued tresses from a tall pot, and in these days of fierce arguments about who is a Jew, I suggest we keep Tradescantia zebrina out of it.