Let’s Discriminate Against All The Jewish Lawyers 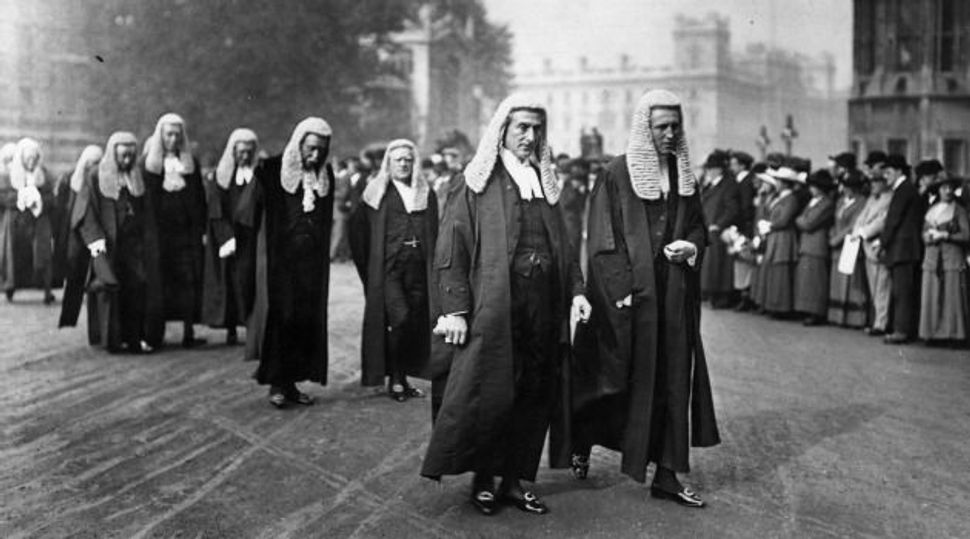 The Ruling Class: In the early part of the 20th century, hardly anyone within the upper reaches of the American legal establishment had a good word to say about lawyers from Jewish backgrounds. Image by Getty Images

No one, not even the mightiest of institutions, is immune to the changes wrought by globalization, digitalization and a weakened economy. Still, I was surprised to learn recently that law schools have been particularly hard hit — so much so that they have begun to rethink the very nature of legal education and its relationship to the commonweal.

The American law school has long been a stable conduit of upward mobility, especially for the sons and daughters of immigrants. But these days, a law degree, whose cost is prohibitive, is no longer a guarantee of financial security. As a result, the keepers of the American bar must figure out how to make a career in the law both possible and rewarding for future generations.

This is hardly the first time that those concerned with the future of the legal establishment have contemplated an overhaul of the curriculum. But it may well be the very first time that those who argue for change are eager to extend the franchise rather than delimit it. When, early in the 20th century, the nation’s legal gatekeepers trained their sights on the law school, they were motivated more by keeping out rather than welcoming in prospective applicants, a steadily growing number of whom happened to be Jewish.

Back then, hardly anyone within the upper reaches of the American legal establishment had a good word to say about lawyers from Jewish backgrounds: Their English, it seemed, wasn’t up to snuff, their grasp of America’s heritage was faulty and, worse still, they reportedly commercialized the law, rendering it a business rather than a form of stewardship. But don’t take it from me. Let’s read what some of America’s legal brahmins of the 20th century thought about those whose ambition apparently did not quite match up with their pedigree. Their perspective chills the soul, while also reminding us of how far we’ve come.

Consider, for example, the observations of Charles A. Boston, Chairman of the Standing Committee on Professional Ethics of the New York County Lawyers Association. Among the “forces making for the current deterioration of the bar,” he publicly declared in 1908, was the “ambitious and intellectual capacity of Oriental immigrants, with no apparent conception of English or Teutonic ideals.” He meant the Jews, of course, who were often labeled Oriental or Asiatic as opposed, say, to those whose feet appeared to be more firmly planted in Western or Occidental civilization.

Charles Boston’s colleague, George Wickersham, a former United States Attorney General, couldn’t agree more. Writing in the 1920s, he allowed how the contemporary American bar was filled with a “pestiferous horde of aspiring lawyers whose spoken English is of the most imperfect character and who lack the faintest comprehension of the nature of our institutions or their history and development.”

Or how about this, from the pen of Harlan Fiske Stone, the dean of Columbia University Law School, who would go on in the 1940s to become the Chief Justice of the Supreme Court. Lawyers who are Jewish, he categorically declared, constituted the “greater numbers of the unfit who exhibit racial tendencies toward study by memorization and who display a mind almost Oriental in its fidelity to the minutiae of the subject without regard to any controlling rule or reason.”

At other moments, it wasn’t so much the intellectual bravura, ethnic origins or accented English of Jewish lawyers that disturbed America’s custodians of the law. It was the way they seemed to have transformed the practice of law from a noble, ethical profession into a gritty business.

Take, for example, the remarks of Henry Drinker, one of the nation’s leading authorities on lawyerly ethics during the interwar years.

“These fellows that came out of the gutter and were catapulted into the law,” he wrote, referring to the Jews, “were merely following the methods their fathers had been using in selling shoe strings and other merchandise… that is, the competitive methods they use in business down in the slums.”

Now and again, these harsh comments were softened by slightly more welcoming and encouraging ones, like that made by the dean of one urban night school with a significant enrollment of Jewish students. Every graduate, he observed, “might become a factor for law and order in his immediate neighborhood. His example and influence [might] help to mold the different elements of a cosmopolitan city into one composite mass of law-abiding citizens.”

True enough. But in the overwhelming majority of instances, Jewish lawyers were believed to be constitutionally unable to understand that the law was more than the sum of its provisos. As their critics would have it, the Jews had “little inherited sense of fairness, justice and honor as we understand them,” and were “committed only to their own selfish advancement.” How, then, are “we to preserve our Anglo-Saxon law of the land under such conditions?”

Cherishing a vision of the United States that was nativist and Christian in equal measure, the cultural custodians of the American bar made little allowance and even less room for those who, by birth and religion, stood outside their frame of reference.

Happily, some things have changed since then — and for the better.

Let’s Discriminate Against All The Jewish Lawyers