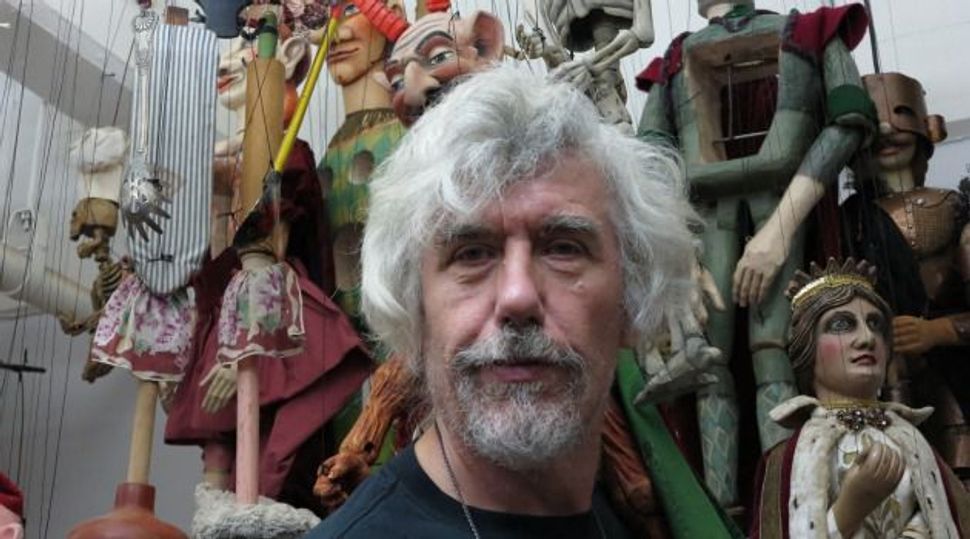 The 23-year-old, New York-based Czechoslovak-American Marionette Theatre has forged more than a few productions that center on Jewish topics — from “Golem” to “The Very Sad Story of Ethel & Julius” to its newest piece, “King Executioner.”

The latter, now playing through April 7 at Theater for the New City, explores how the Nazi-afflicted atrocities in World War II Poland inform the life of a local Christian boy who joins the resistance and goes mad.

The allegorical tale with pacifist underpinnings is inspired by the Tadeusz Nowak novel “When You Are King, You Will Be an Executioner.” Frank London of The Klezmatics composed the music, and the Yiddish dance master Steve Weintraub choreographed the piece.

“The reason Jewish stories interest me might have something to do with my daughter being Jewish, meaning her mother is Jewish,” said Vit Hořejš, the Czech-born founder and artistic director of the internationally acclaimed marionette theater. “I can’t help wondering what would happen if someone took offense at my daughter [because she is a Jew].”

“King Executioner” focuses on “a good man fighting for a good cause, but he goes crazy because he is killing people he has known all his life,” noted Hořejš, who talked with the Forward at a rehearsal space in the Dumbo section of Brooklyn shortly before a run-through of the play.

Set designer Theresa Linnihan was busy painting scenery stretched across the floor. Dozens of marionettes dangled from the ceiling; some were 2 feet tall, others several inches in height. All boast stunningly expressive faces — grimacing, grinning or leering — that are carved and or painted in a spray of colors. They are the true stars of the show, adding layers of interpretation as well as opportunities for enhanced interaction, Hořejš explained.

Within moments, a disheveled and exhausted London entered the room. He had just returned from a trip to Canada and, he remarked cheerfully, hadn’t slept in more than 24 hours.

A well-known musicologist and a major player in reviving klezmer music, London was eager to talk about his contribution to “King Executioner” and the challenges he has faced, not least “the frisson between the lightness of the music and the darkness of the whole piece, with its existential or nihilistic or absurdist elements,” he said. “But we’re not going for abstraction. The imagery of apples, horses and trees bring in the Polish folk songs and klezmer influences.”

London, who described himself as a Hasidic egalitarian, said his cultural-religious background has no bearing on the way he approaches musical composition, including Jewish music. “The only way Judaism affects me is the way I practice Judaism,” he asserted.

“The characters are not all good or all bad,” said London. “History is thrust upon them, and they react in all sorts of ways. One story is not a negation of another story. One person may be suicidal, another becomes a great fighter.”

According to Weintraub, who weighed in with an email, “the play approaches the Second World War from a Polish perspective, which is kind of refreshing, since American Jews mostly see the war framed in a Holocaust context, and we don’t usually see the general existential human upheaval that the war brought.

Having worked at Jewish festivals in Poland, I know there are deep wounds that are felt. And despite the popular Jewish narrative, not everyone was out to get the Jews, and the Nazi occupation was a trauma for the Poles, as well, that each family — and their descendants — has had to deal with.”

Hořejš himself has been keenly in tune with Jewish sensibilities for a long time. Launching his career as an actor-director and translator, the first lap of his journey out of Communist Prague was Italy, where he served as Primo Levi’s translator on “The Periodic Table.”

In 1979 he made his way to New York’s community of Czechoslovakian émigrés on the Upper East Side, and five years later he discovered 69 marionettes in the attic of the Jan Hus Church, the house of worship for many Czech expatriates. Creating a marionette theater almost felt inevitable, not least because puppetry had been so much a part of his early life.

As in many totalitarian countries where censorship in theater was routine, the censors overlooked Czechoslovakian puppet shows because these productions were viewed as children’s fare, and therefore theater artists were free to use puppetry as vehicles for political commentary and satire.

Audiences are still not quite sure how to interpret puppets, Hořejš commented. Some people continue to think they’re designed exclusively for children. Others are actually afraid of puppets. “It’s a recognized phobia: puppaphobia,” he said.

Hořejš admitted he’s wondered how theatergoers would interpret the piece, suggesting that the affirmative ending will put to rest, or at least mitigate, any notion that the production is taking an anti-Resistance position.

“Look at the faces,” London said, gesturing at the hanging marionettes. “Are they smirking? Are they angry? It’s never clear, and that’s part of the ambiguity.”