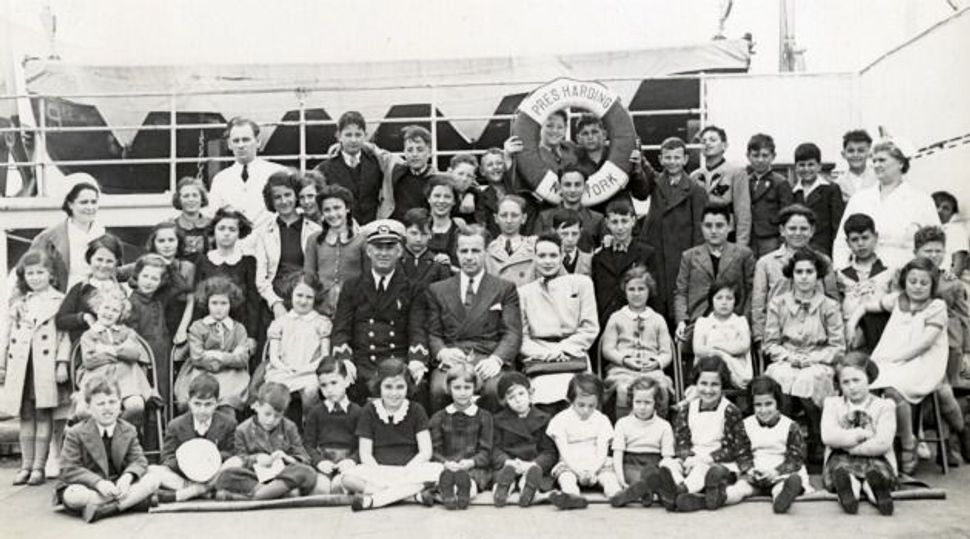 Mission Accomplished: Gilbert Kraus helped to plan the largest Kindertransport to the U.S. Image by Courtesy of HBO

**EDITOR’S NOTE: In honor of the 75th anniversary of the kindertransports, we remember the dramatic story of 50 Jewish children’s rescue from the Nazis, which started in Vienna and wound up Philadelphia. **

In early January of 1939, New York businessman Louis Levine traveled to Philadelphia to meet with Gilbert Kraus, the man he believed capable of carrying out a bold plan.

As they sat in Kraus’s law office in the nearly new Bankers Security high-rise at 1315 Walnut Street, Levine laid out his idea: Pry loose visas from the tight-fisted State Department, travel to Germany and bring back 50 Jewish children.

Levine, who was grand master of the Jewish service organization B’rith Sholom, founded in Philadelphia in 1905, knew nothing about immigration law. And Kraus was not an immigration lawyer. But Kraus had three attributes, his granddaughter says, that ultimately resulted in the daring rescue from Vienna of 50 Jewish children, in what would prove to be the largest Kindertransport, or rescue mission, to the United States.

“He had the soul of an artist, the will of a bull and the means to effect things. Put those three things together, and the extraordinary happens,” Liz Perle said of her grandfather.

While The New York Times and other newspapers carried the story of the children’s June 3, 1939, arrival on the S.S. President Harding, the drama that preceded it is only now being told in a documentary film that will air at 9 p.m., April 8, on HBO.

The surprising, heart-wrenching details emerge in “50 Children: The Rescue Mission of Mr. and Mrs. Kraus,” narrated by Alan Alda and Mamie Gummer. The film is based on a 170-page memoir written by Kraus’s wife, Eleanor. The Philadelphia family kept it in a drawer.

“I grew up knowing the story,” said Perle, co-founder and editor-in-chief of Common Sense Media. But her grandparents were not ones to tout their achievement. “You’d never know they were anything but ordinary people,” she said. “They didn’t talk about it.” Even her cousins, Perle said, knew little about the coup until an uncle’s 80th birthday party, in 2006.

It was only after San Francisco journalist Steve Pressman, whom Perle married in 2001, focused on the manuscript about three years ago that the idea for a film took flight.

Eleanor Kraus “told this incredible story that had been hidden away for years and years,” said Pressman, who began checking the tale against archival records in the State Department and elsewhere. “It was the sound of fiction, but lo and behold, it did happen just as she said it happened.” Previously untold was “how the two of them — particularly Gilbert — figured out how to get 50 kids to the United States at a time when to get Jews in was all but impossible because of immigration laws. That part was never uncovered.”

Indeed, everywhere the couple turned, people said it could not be done. But Gilbert Kraus, “above all else, was a stubborn son of a gun with a contrarian streak. If you said, ‘You can’t do that,’ he would say, ‘I’ll find a way,’” said Pressman, who wrote, produced and directed the film.

“He felt passionate about the issue, but it was essentially part of his character — whether America’s government or other Jewish organizations were not keen on the project, his response was, ‘No one’s going to tell me what I can and cannot do.’”

According to Pressman, Gilbert Kraus worked State Department connections to strike up a relationship with George Messersmith, who at that time was assistant secretary of state. The outspoken Messersmith (featured in Erik Larson’s best-seller, “In the Garden of Beasts”) had red-flagged the dangers of rising Nazism during his posting as consul general in Berlin from 1930 to 1934. Indeed, at one point he described some of Germany’s leadership, in a cable to Washington, as “psychopathic cases” who “would ordinarily be receiving treatment somewhere.”

Messersmith, who served in Vienna from 1934 to 1937, advised Kraus to focus there, Pressman said. Kraus argued that so-called “dead-number” visas — issued but unused as people died, were arrested or traveled to other countries — should be freed up for the children.

As Kraus was working the legal end of things, his wife was working her social ties, trying to get families to sign affidavits to host and support the children, should they ever get out.

It’s a role that Perle cannot imagine undertaken by her elegant grandmother. “She had to go to her fancy society friends and ask for money, which you just didn’t do,” Perle said. “She was not one to call on her friends and ask an enormous favor.”

B’rith Sholom’s Philadelphia lodges also held fundraisers such as sporting events and poker nights to raise money, said the organization’s national president, Joel Rosenberg. At least $150,000 was raised, he said, but the organization has been unable to calculate the total cost. “We couldn’t get clear records going that far back,” he said recently.

With war imminent, the 34-year-old Eleanor Kraus was “thrilled” Perle said, when the State Department warned her not to travel with her husband to Europe. Besides, she had two small children at home. After sailing to Europe in early April, 1939, he wired his wife from Vienna that he really needed her help. She boarded the next boat.

“It was the right thing to do, and her husband wanted her to do it,” Perle said. “It was incredibly selfless in a woman you wouldn’t think of as selfless.”

Through Eleanor Kraus’s pen we learn of the selection process that took place in Vienna after the Jewish community, via the Israelitische Kultusgemeinde, put out the word. Hundreds of parents showed up with their children. The Krauses, along with Philadelphia pediatrician Robert Schless, chose 25 boys and 25 girls, ages 4 to 14, who they thought would be resilient enough to survive what might prove a permanent separation.

Through Eleanor Kraus’s eyes we witness the scene on May 22, 1939, at the Vienna train station.

A young mother herself, she learns that a wave goodbye might be misinterpreted as a Nazi salute, forbidden to Jews and subjecting them to arrest. And so, the parents and children are not allowed to wave.

For Pressman, it is the most dramatic moment of the saga, as it was for Eleanor Kraus, who titled her memoir, “Don’t Wave Goodbye.”

Not to give away more details of the film, but there’s high drama in Berlin’s exclusive Hotel Adlon when the Krauses cross paths with top German and Italian military officials who have just signed a pact between the two nations.

And there’s a very poignant moment at the American consulate in Berlin, where each of the Jewish children — who, starting in January 1939, were all required to have on their identity papers “Jewish” names such as “Sarah” for girls and “Israel” for boys — is asked to sign his or her name on the new American papers.

Pressman tried to locate the children, now pushing into their 80s and beyond. He says that a year ago, about half were still alive. Some have traveled to reunions hosted by One Thousand Children Inc., which is dedicated to the 1,000 or so children who arrived in the United States via Kindertransports.

Nine of the Krauses’ 50 children are in the film. Among them is Kurt Herman of Philadelphia, who was 9 years old when his parents offered him up to the Krauses.

What struck him about Eleanor Kraus was that she was “a gorgeous woman with red fingernail polish. We were fascinated by the polish,” he said recently. “We’d never seen red.”

Herman, whose parents eventually escaped to the United States, is now 83. He has vivid memories — as an 8-year-old — of the Monday after Hitler annexed Austria in March 1938. Suddenly, he became a pariah to his non-Jewish school friends.

“They wouldn’t play with me anymore,” said Herman, who for years has been telling his story to Philadelphia school children. “I asked my father, ‘What did I do?’ His answer: ‘You were born Jewish.’”

He counsels his own grandchildren. “When you’re in a pinch, you better rely on your family. Friends are great — I had friends, too. And like that,” he said, snapping his fingers, “I was a dirty Jew.”

Gilbert Kraus died in 1975, still the single-mindedly determined man he had always been. “He had what was then called ‘hardening of the arteries,’” said Perle, who was about 19 when he died. “When he needed more help, he quietly starved himself to death.”

Eleanor Kraus died in 1989, and the couple’s story was captured in the typewritten pages she left behind.

For the Kraus family, “I can’t tell you what a big deal it wasn’t,” Perle said. “Only now do we realize the anti-Semitism of the State Department, the fear in the Jewish community that if they spoke up, fewer Jews would be allowed in.

“Only now do we realize it was something heroic.”

Dorothy Brown is the former enterprise editor of print and digital media at the Philadelphia Inquirer. She blogs at www.unRetiring.blogspot.com