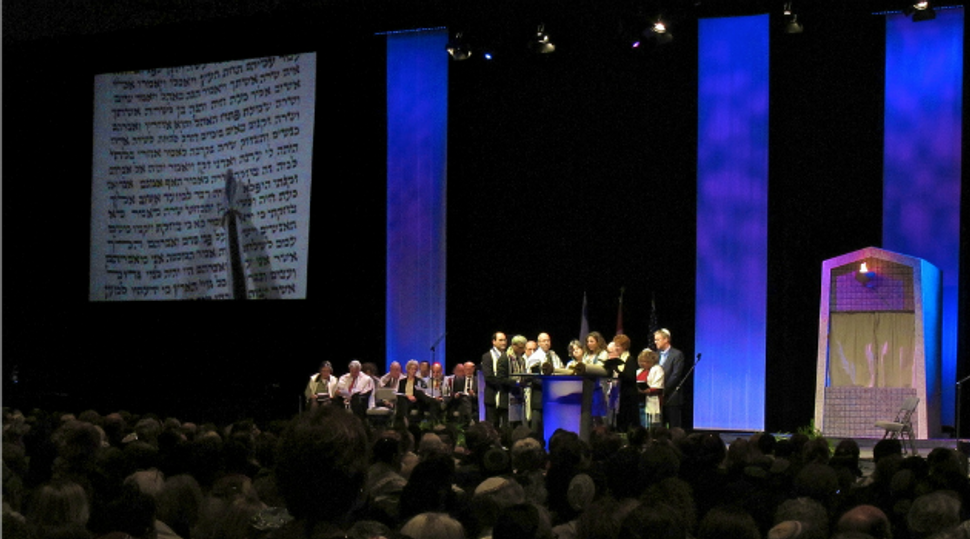 Projected: Popular with Evangelicals, visual tefillah is a new trend among Jews. Image by Steve Medwin

Several years ago, Rabbi Lance Sussman, spiritual leader of the Reform synagogue Keneseth Israel, in Elkins Park, Pa., received the grim news that he was going blind. After surgery, eye patches and other treatments, his sight miraculously improved. The experience left him with a profound appreciation for the visual in life.

“We live in an age of images,” Sussman said. “It got me to thinking: If synagogues were to accompany prayers with imagery on a screen, couldn’t it make for a more meaningful worship service?”

Today, visual tefillah is so popular at K.I. that the sanctuary was recently refurbished to include permanent, high-capacity double screens by the bimah. The prayers are projected in the original Hebrew as well as in transliteration, accompanied by colorful illustrations. For example, the congregants see a Marc Chagall image of Moses imbedded in the prayer Mi Kamocha.

The screen also includes page numbers for those congregants who prefer the prayer book. “That saves us about 10 minutes of constantly telling people what page we’re on,” Sussman said.

“I think visual tefillah picks up where stained windows left off,” he added. “It’s basically a hiddur mitzvah,” a way of beautifying the commandment. “The Talmud says: ‘If you’re going to build a sukkah, make it beautiful, since art is a praise of creation.’”

Rabbi Dan Medwin, publishing technology manager of the Central Conference of American Rabbis, is well aware of the possibilities of visual tefillah, and even wrote his rabbi’s thesis about it in 2010. He has created hundreds of visual prayers, which he showcases at various conferences of the Reform movement, notably to religious school principals, summer camp directors, youth leaders and day school rabbis.

“When I go to regional conventions, people tell me things like, ‘We’ve been experimenting with visual services, but we can’t do it well,’ or, ‘We just don’t have the time to put it together,’” Medwin remarked. Now, congregations can order visual services from the CCAR. They come in two versions: “locked,” in which the prayers can’t be altered, or “unlocked,” which allows them to adjust them as they see fit. The unlocked versions cost more.

Congregation Shomrei Torah, a Reform synagogue in Santa Rosa, Calif., is a synagogue that uses CCAR’s visual tefillot, and the congregation’s rabbi, Stephanie Kramer, says that it’s been highly successful. “

Pedagogically, it’s a great learning tool for children learning Hebrew and trying to follow a prayer service,” she said. The board approved spending money to wire permanent projectors onto the ceiling so that the images are projected onto either side of the ark during services, but are not visible when the projectors are turned off. Kramer leads the services wirelessly using her iPad and Apple TV.

“We project not only the page numbers and prayer titles, but the Hebrew and English for every prayer and reading, with beautiful pictures that enhance the prayer experience,” she said.

Other synagogues prefer to make their own visual prayer services. For the past six years, Temple Emanuel of Beverly Hills, an 800-member synagogue, has been conducting a monthly Kabbalat Shabbat service without prayer books. During each service, called Shabbat B’Yachad, or Shabbat Together, local musicians and talented congregants lead the prayers in a spiritual rock sing-along, and the congregants, glancing at the screen, sing and dance along.

Rabbi Jonathan Aaron, who designs the visual tefillot for Temple Emanuel, says that the worshippers seem much more interested in the service when they aren’t holding books in their hands. “People’s heads are up more, and it feels more like a community,” he said.

For some people, though, it’s been difficult to let go, Cantor Yonah Kliger said. “At the first few sessions of Shabbat B’Yachad, we put the siddurim away, and some of the congregants were actually walking around, trying to find them. But we felt strongly that when the prayers are on a big screen, it allows the congregants to connect to the words and music in a visceral way.”

Woodlands Community Temple, in White Plains, N.Y., conducts a similar Kabbalat Shabbat service every six or eight weeks. In the program, called “A Joyful Noise,” an 11-piece volunteer music ensemble plays the melodies to the prayers as the text is projected onto two large screens overhead. Mindful that some congregants still prefer the prayer book, Rabbi Billy Dreskin accommodates them by including the page number on the lower right-hand corner of the screen.

When visual tefillah was just beginning to catch on, most rabbis assumed that the elder congregants would be resistant; however, the majority of them have welcomed the change. “A lot of them tell me that they like it because the letters are large and illuminated, and it’s easier when you don’t have to hold on to a siddur throughout the service,” Medwin said.

“When your hands are free, you can clap your hands, put an arm around the person next to you, or let a child fall asleep in your lap,” Dreskin said. “Some people might ask, ‘How is it that the People of the Book are letting go of the book?’ But honestly, we’re not letting go of it; we’re just putting it on the screen.”

Rukhl Schaechter is the news editor at the Forverts, where this article first appeared in Yiddish.