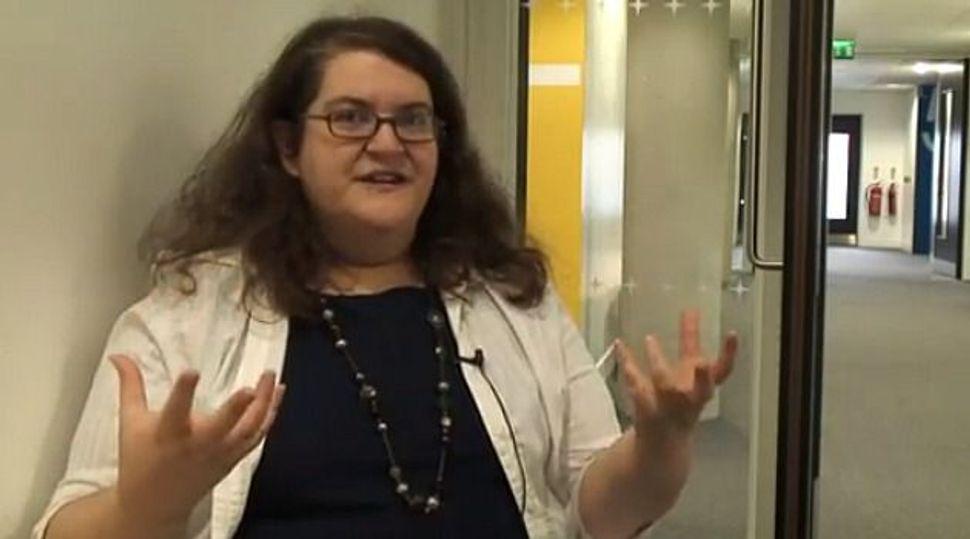 Preaching To The Choir: Naomi Alderman?s novel focuses on the memories of four people who knew a dead preacher/rabbi/rebel named Yehoshua. Image by Naomi Alderman

It is odd that in a media-saturated time when people seem unable to remember important events that happened last week, much less the decades-long story of how we got into the economic and political mess we’re in, historical storytelling flourishes.

Whether fiction or nonfiction, history books sell. At the Oscars this year, history films dominated the best picture category: “Lincoln,” “Argo,” “Zero Dark Thirty.” Even “Django” — with its bloody, comic book view of plantation life — has to be considered a history film.

Most of this stuff, however, is populist pap. Formulaic. Designed not to challenge readers and audiences. Aimed at entertaining and providing comfort by making it seem that people in the past were really just like you and me.

Great historical writing comes not from imagining how the people of the past are like us, but from understanding how differently life was lived across the centuries and millennia.

It is a much more time-consuming and difficult process for writers to bring that difference to life. Empathic understanding of the past — another country where things are done differently, as the man said — is hard work. You must suspend your contemporary prejudices about behavior. You cannot judge your characters’ attitudes about gender or race from a contemporary sensibility. Nor can writers understand their characters’ motivations to heroism or cowardice by thinking these characters are “just like us.”

For example, a Jewish historian writing about Jews in 19th-century Europe cannot judge the community’s passivity in the face of profound anti-Semitism, and its willingness to make accommodations with its tormentors, with a post-Holocaust sensibility.

The reward for doing this hard work is that the author will have a new understanding of the motivations of people in their day-to-day lives. Then comes the next difficult step: translating your insights into actions and words. To do this, an author will very likely invent a new voice and style for telling the story.

This is precisely the process that Hilary Mantel used in “Wolf Hall” and “Bring Up the Bodies,” her phenomenally successful books about Henry VIII’s fixer-in-chief, Thomas Cromwell.

The British-Jewish novelist Naomi Alderman brings the same method to bear in her exceptional new book, “The Liars’ Gospel.” In it, Alderman takes on what Hollywood christened “The Greatest Story Ever Told.” The result is a deeply researched, empathically imagined, ferociously told exploration of the Jew known as Jesus.

Starting with a prologue set in the inner courtyard of the Temple as Pompey’s army batters down Jerusalem’s walls in 63 BCE, she brings to life the world of a conquered Judea, perpetually in rebellion against Roman masters.

”The Liars’ Gospel” focuses on the memories of four people who knew a dead preacher/rabbi/rebel named Yehoshua. They are his mother, Miryam; one of his followers, Iehuda from Qeriot; the high priest Caiaphas, and a zealot leader, Bar Avo, chosen to live when Yehoshua is condemned to crucifixion.

Each of these character’s stories is familiar from the New Testament, but each is inventively reimagined.

Miryam/Mary is a mother grieving for her dead eldest son when the story begins. He had been estranged from her, having left his family’s home rather than marrying and bringing a wife into it and filling it with grandchildren.

There is confusion over his final resting place, and it is a torment to her. When rumors reach her that perhaps he did not die after all, she scoffs angrily. Of course he’s dead. A mother would know if her eldest son were alive anywhere in the world. Certainly a Jewish mother would.

Miryam knows the terrible way he died. As a child, she had walked past rows of crucified Jewish rebels; she remembers the men crying out for their mothers. Alderman describes the crosses as “screaming trees.” The memory is a small comfort. She is certain that her son cried out for her at the very end.

Jehuda/Judas betrays Yehoshua to the Romans but doesn’t hang himself. His betrayal is an act of collaboration, and he simply continues down the path of accommodation with Rome.

Caiaphas is the ultimate politician: venal, but believing that every compromise he makes with the Roman prefect ultimately allows his people to survive the occupation until God sees fit to crush Rome.

Bar Avo/Barabbas is portrayed as the dark twin of Yehoshua. His name is a nom de guerre of the rebel underground, meaning “son of his father.” Well, every man is the son of a father, as Alderman reminds readers. How can the Romans find him?

This is audacious stuff. But there is more to the novel than simply reimagining the world in which the historical Jesus lived. Alderman also wants to describe an alternative way in which the four books of the Gospels were created. She is well-placed to do this.

The author grew up in an Orthodox home in North London. Her father is a prominent academic historian. She has been researching this book for 20 years. Alderman knows Hebrew and Latin and has clearly spent time looking through original sources.

The deftness with which she hints at an alternative history of the Gospels is one of her book’s strongest points. Glimpses of what will become the cornerstones of the work of Matthew, Mark, Luke and John flash by.

Gidon, a young acolyte of Yehoshua, comes to live with Miryam after Yehoshua’s crucifixion. Over and over, he presses her for stories about her son. “There are no stories,” the embittered Miryam says. “He was a baby and then he was a child and then he was a man and then he was killed. That is the story.” This is not enough for Gidon. He wants and needs more. Miryam relents and makes up something for the young man. Yes, the child was called “blessed” in her womb, by a stranger passing through the village. Miryam knows that a “stranger” could mean an angel to this boy. A lie can be the beginning of a story.

At a gathering of his zealot army, just before Passover, Bar Avo raises bread and wine before his troops and tells them to eat, for this is the Roman armies’ blood and meat, which the Jews will devour. Misremembering an event can also be the beginning of a story.

Unlike Mantel, Alderman works tight. “The Liars’ Gospel” is not a particularly long book. I have read it through twice. Of all the books I have ever read, this one has made the era just before the Temple’s second destruction seem most alive. The book’s contemporary resonances are implicit. The fierce struggle over the land of Palestine and the Jewish place in it seems never to have stopped. The book is also a wonderful meditation on how storytellers bend reality into myth and how those myths can grow into a religion.

Michael Goldfarb is the author of “Emancipation: How Liberating Europe’s Jews From the Ghetto Led to Revolution and Renaissance” (Simon & Schuster, 2009).