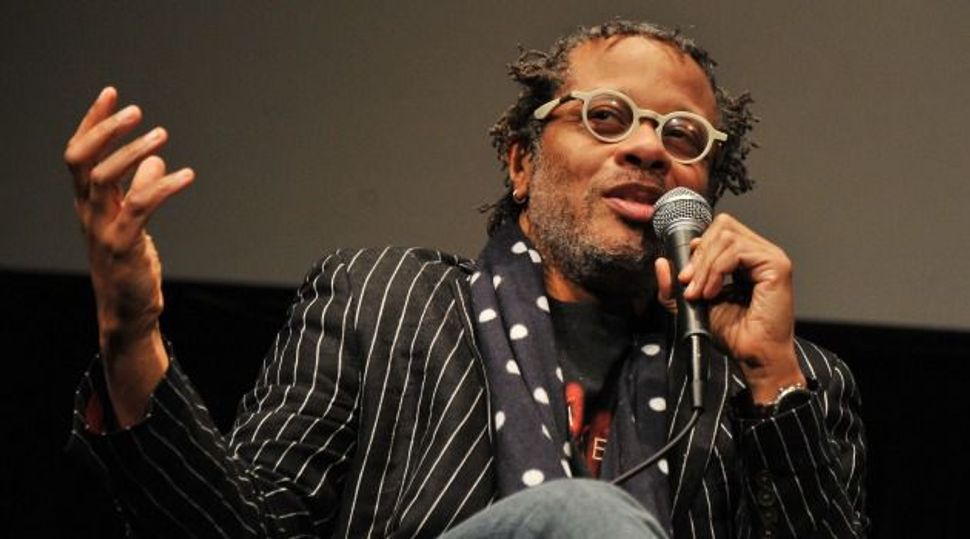 A pre-eminent contemporary multi-instrumentalist and composer rooted in jazz, Don Byron has engaged with a wild variety of musical styles — from rap to neo-classical, funk to heavy metal — and is currently touring with the New Gospel Quintet, exploring the heritage of African-American spirituals It was his encounter with klezmer, however, and his tribute album to the Borscht Belt musician and comedian Mickey Katz (“Don Byron Plays the Music of Mickey Katz”), that brought him a great deal of attention earlier in his career, two decades ago.

Over the years, this encounter served as a source of both mirth and awe; in retrospect, Byron’s attempt to resuscitate Katz (1909-85), and his peculiar interpretation of the klezmer legacy has had a major impact on further development of klezmer and on the unfolding of what came to be known as the Klezmer Revival. The Forward’s Jake Marmer talked to Byron about klezmer, cultural appropriation, assimilation and hipness.

Jake Marmer: In his seminal “Visions of Jazz,” Gary Giddins has an essay about encountering your Mickey Katz tribute at the Knitting Factory for the first time. He mentions that one of his friends, who is Jewish, admitted he knew Katz’s music but was sort of embarrassed by this legacy. And so Giddins (very bravely, I think) admits that although you probably didn’t intend this at all, somehow your engagement with this music made it okay for a lot of assimilated Jewish musicians to engage with klezmer and reconsider it as legit. Have you seen the effects of this?

Don Byron: A lot of people had those kinds of feelings about the music. If you were trying to be hip, and hip meant being assimilated, it was going to be hard to face the thing you ran away from, especially at first. I know many of the downtown types had never seriously thought about doing that music, though many would deny my impact on them; however, you couldn’t really argue with the crowds we were getting. That probably broke the ice for many of them. The first anniversary of the premiere of “Mick at the Knit” suddenly became a downtown festival, including all the revival acts and the downtown folks.

There were club owners of Jewish descent who wanted nothing to do with the music at the time. I remember a guy, who will remain nameless, who said he didn’t want “those people” in his club. On the one hand, if someone programs their venue with a certain kind of thing, that’s okay, but this seemed very personal, had real venom in it. On the other hand, I don’t judge someone for not wanting to be into klezmer music. It’s not the mark of coolness or good person-hood.

Recently I saw “Django” (which I thought was too long and boring in spots). The main thing I came away with was that [Quentin] Tarantino could face the subject with a level of glee that no black director could possess. The subject would be too personal, too hot. In retrospect, the distance I had sociologically gave me the objectivity to make the thing work. Yet I feel like I learned a lot from the experience of doing it. I saw and heard a lot of things that most Jewish folks don’t even get to experience, saw the religion from many angles, from Orthodox to hippie Reform. And I watched people tackle their basic issues in front of me, and sometimes at my expense. It was an interesting ride.

How did you discover Katz in the first place?

My discovery of Katz, it came after I had been in the KCB [Klezmer Conservatory Band] for a bit and had performed most of the Tarras/Brandwein stuff that I was interested in. This is not to say that I didn’t like the music, but there was a finite group of recordings, and everyone in the music was playing the same pieces. I heard a tape of “The Dreidel Song” and immediately wanted to play it…. You had to know a bit of advanced harmony just to transcribe it accurately, and had to have near-concert technique to play it. Playing that music always made the band perk up, because Katz’s guys were serious, well-trained, working American musicians. You could hear that these guys could really play, and nobody was playing that music. As I recall, during the same period, I was living with [KCB’s famed bass player] Jim Guttmann, and he came home with a copy of the Musiker Brothers’ Tanz that he found in a used record store, asked me to listen to it and asked if it was any good. The rest is history.

Mickey Katz was very raw, unassimilated — un-American in his sound and sense of humor. How did you come to understand his world, klezmer and the whole Eastern European Jewish headspace so profoundly?

I firstly related to the format of Katz’s arrangements, which I described at the time as concerto for orchestra-esque. But overall, I saw Katz’s group as a forum for technically and harmonically well-trained American musicians like Nat Farber and Mannie Klein, and I staffed my group with great players like Uri Caine, Mark Feldman, Josh Roseman and Dave Douglas way before the jazz world was fully ready to give it up to any of us. There were klezmer groups around, but none that could match that group’s edginess and creativity. It was that edge that brought the Knitting Factory crowd and Katz’s music together, making the way for the radical Jewish movement of John Zorn.

The students I’ve taught in recent years are very unobjective. If they don’t know anybody who’s into something, they won’t take it seriously. If the musicians don’t look like them, don’t come from similar backgrounds, they can’t hear it. Maybe most folks are like that. I have studied and played all kinds of music. When I was still in school I played with downtown musicians, Latin musicians, free jazz musicians, straight-ahead jazz musicians, classical musicians, ethnic types. Anyone who knew me in my undergrad days knows, I played many musics successfully and with empathy.

Certain thinkers, like Amiri Baraka, have had strongly negative feelings about non-African-American musicians playing jazz — and in particular, Baraka has singled out Benny Goodman a lot. At times, Baraka’s issue is with socioeconomic disadvantage, in which African-American jazz musicians have all too often found themselves; but he tends to probe beyond that, into questions of cultural appropriation. What are your thoughts on this, and in general, how do you see a musician’s identity factoring into both the content and forms of his/her work?

Well, to start, we need to be able to look objectively at how American culture has worked. So much of so-called white American culture comes from black musical roots, along with the disturbing repeating scenario that once whites are involved, the music suddenly isn’t black anymore. In country music, separating the music from blackness was a big part of the music’s development and marketing, this despite the fact that the much of the music was blues based. When I was active in klezmer, I could feel people’s concerns about these issues, yet I never said that the music wasn’t Jewish just because I was in it. African Americans are the only group in the world this has happened to. Rock, country, jazz, all these musics have become formerly black. If that happened to you, it might make you a bit cranky. This is where identity comes into play. European-American assimilation and music originating in the black community seem to go hand in hand…. I used my objectivity to present it in a different way, opened up new audiences to the idea that it could have some relevance and hipness, but I never denied its fundamental Jewishness. Nor was it an act of musical self-hatred to play it. I have stood up for my musical and personal blackness, injecting more of that into jazz clarinet than anyone of my era. It was never one or the other.