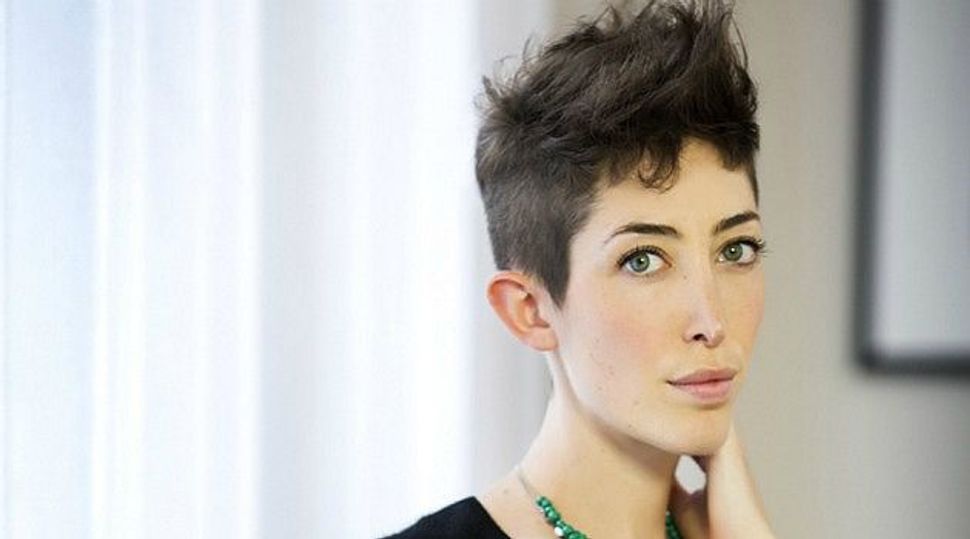 The New Carrie Bradshaw: Rebecca Dana covered fashion and entertainment for The Daily Beast before penning her memoir ?Jujitsu Rabbi and the Godless Blonde.? Image by Terry Gruber

“Jujitsu Rabbi and the Godless Blonde,” Rebecca Dana’s chronicle of the time she spent sharing a Crown Heights apartment with Cosmo, a martial arts enthusiast and spiritually confused Hasid, is a study in contradictions.

Take, for instance, the odd-couple pairing in the book’s title. Consider too the strip of bacon prominently featured on the front cover, and another, for good measure, floating on the back cover — a suggestion of godlessness in a book that repeatedly returns to a need for some connection to the divine. And then there is the book’s tendency to simultaneously mine and mock “Sex and the City.”

But, though all of the above might make the book sound insufferable, Dana just about makes it work. She wants to have it both ways, to be the second coming of Carrie Bradshaw and to hold on, however tenuously, to a belief in the coming of the Messiah. By memoir’s end, she manages to balance the two. More impressive still, Dana’s attempt to convince the reader that her two belief systems are compatible, even mutually elucidating, is often quite entertaining.

Formerly a columnist for The Daily Beast, Dana covered fashion and entertainment and attended fabulous parties — and she wears fabulous shoes. A transplant from Pittsburgh (“technically, [she’s] not even from the pea-size industrial city.… but O’Hara Township, a small suburb to the north”), Dana arrives in New York in January 2005. Having quit “a job [she] never liked as a reporter for the Washington Post,” she has come “to participate in the world’s largest choose-your-own-adventure story,” which, at least initially, involves working at the New York Observer and realizing her long-standing “Sex and the City” fantasies. She meets and moves in with a lawyer she dubs, for the purposes of the memoir, “Chad” (a sure giveaway that this relationship is inevitably doomed), and fully commits herself to this “beautiful fairy-life.”

And of course the fairy tale collapses. (Like Chekhov’s proverbial gun, a happy romance introduced in the first chapter of a memoir must be destroyed in the second.) Dana learns that Chad has been prodigiously cheating on her, a revelation for which he offers as justification his sense that she is simply not pretty enough. And just like that, Dana — who grew up in a secular family, who finds the idea of God “far-fetched,” who, as an adolescent, enjoyed tormenting the rabbi with her inquiries into the specific timing of the Messiah’s arrival — is confronted by the apocalyptic demise of her love life and the loss of her faith in the gospel of Carrie Bradshaw.

Dana’s version of the ancient Israelites’ wandering in the wilderness is a move to Crown Heights, where, for the price of $975 a month, she procures for herself a room in Bernice Court, an apartment building a mere six blocks from 770 Eastern Parkway, former home to Menachem Mendel Schneerson and central headquarters of the Lubavitcher movement. Included in the rent is a roommate: “Cosmo,” a Soviet-born 30-year-old ultra-Orthodox rabbi in the throes of his own crisis of faith. (Cosmo, Dana informs us, is not her roommate’s real name, and, like Chad, the choice of alias is revealing, suggesting a resemblance to Cosmo Kramer, the vaguely sociopathic but utterly charming neighbor on “Seinfeld.”) Cosmo looks not entirely unlike Brad Pitt (coincidentally his favorite actor), works at a copy shop while he waits for his American citizenship papers to arrive, practices jujitsu (“it’s just like sex, only without the sadness!”) and questions his commitment to Judaism.

He is also just the thing Dana needs. And — what do you know? — she is just the ticket for him. Cosmo takes Dana to a Shabbat dinner at the home of the neighborhood’s best cook; she takes him to a Thanksgiving dinner — his first — at a Lower East Side art gallery. And while Cosmo takes to eating (raw) bacon and dreaming of meeting “a shiksa with a nice rack,” Dana enrolls in a program for Jewish women who don’t feel quite Jewish enough, known as a “Yeshivacation.”

But, eventually, Dana’s Crown Heights sojourn must come to an end. Having, one assumes, amassed enough material for this memoir, she yearns to return to Manhattan, her version of the holy land, but not before she and Cosmo swear to be friends forever. (Dana invites any and all available and interested readers to email her should they be interested in dating Cosmo. Something to consider if you happen to be “a shiksa with a nice rack.”)

By memoir’s end, Dana is no longer a blonde, nor is she godless. Instead, she is Carrie Bradshaw if Carrie Bradshaw were an aspiring tzadik — a firm believer in a happily-ever-after made of equal parts Old Testament and “Sex and the City.” Having traveled between the Boom Boom Room and Machon Chana, the Jewish women’s school in Crown Heights, Dana self-identifies as “a Jew, as a New Yorker, as a girl from Pittsburgh, as a journalist and as about a hundred other things.” What binds these identities together is the sort of commitment to storytelling that sends a resolutely secular 20-something fashion-and-gossip writer to live in one of New York’s least fashionable neighborhoods. Sometimes a trek through the wilderness is just the thing to bring you closer to God, and sometimes a stay in Crown Heights is just the thing to get you a book deal.

Yevgeniya Traps is a doctoral candidate in English at the Graduate Center of the City University of New York.