Passover’s ‘The Song of Songs’ Is Correct Name, Not ‘Solomon’s Song’ 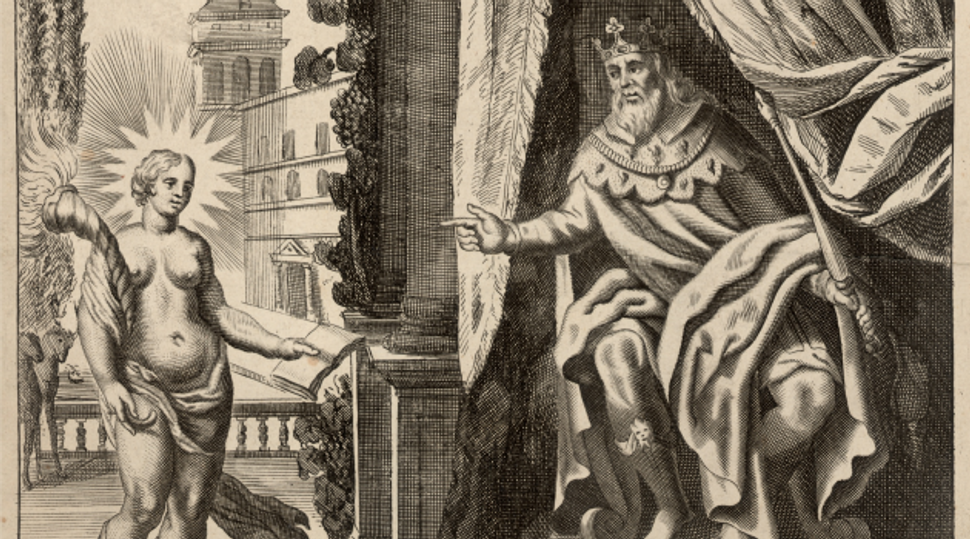 To Play The King: Bible translator John Wycliffe first inserted the name of Solomon (depicted here in an 18th century print) into the title of ?The Song of Songs.? Image by Getty Images

One of the customs of the week of Passover is the reading in the synagogue — done at different times in different traditions — of the biblical poem of “The Song of Songs.” “The Song of Songs,” or “The Song of Solomon,” as it is called by the King James and other English Bibles, is associated with Passover because it is a love poem set in the Palestinian spring, which comes in late February or early March and generally lasts until mid-April. (This year, because the winter’s rains, unusually heavy at first, stopped almost entirely by the end of January, spring has come, and will depart, early.) The poem is full of spring imagery, such as (in the King James Version):

“For, lo, the winter is past, the rain is over and gone. The flowers appear on the earth; the time of the singing of birds is come, and the voice of the turtle is heard in our land. The fig tree putteth forth her green figs, and the vines with the tender grape give a good smell.”

This has always puzzled me, not because of the “turtle” part — the King James Version is referring to the turtledove or wild pigeon, which indeed coos a great deal in its spring mating season — but because the tiny flowers and fruit of the budding grapevine have no smell at all. Perhaps when you’re in the intoxicating throes of first love, they do. In any case, though, what I wanted to write about today was not grapevines or turtledoves, but the two different titles: “The Song of Songs” vs. “The Song of Solomon.”

Among Jews, the biblical poem has always been known as “Shir ha-Shirim” or “The Song of Songs,” after its first, introductory line, shir ha-shirim asher li’shlomo, “[This is] The song of songs, which is Solomon’s.” It is one of three books in the Bible that are attributed to King Solomon, two of them explicitly and one by implication.

The Hebrew word kohelet, which occurs nowhere else in the Bible, is an enigmatic one, a grammatically feminine noun formed from kahal, “congregation” or “audience,” and commonly taken to mean a preacher or someone addressing a crowd. Jewish tradition, and Christianity in its wake, assumed that this preacher-king was Solomon and that he wrote the erotically passionate Songs of Songs when he was young; Proverbs, with its sententious wisdom, in middle age, and Kohelet when he was old and disillusioned.

It was, as far as I can determine, the pioneer English Bible translator John Wycliffe (1320–1384) who first decided to insert Solomon into the title of The Song of Songs. In this he departed from both the Hebrew Bible and the Latin Vulgate, which imitated shir-hashirim with Canticum Canticorum. Wycliffe, on the other hand, called the poem “The Song of Solomon” while reducing its first line to “Here beginneth the song of songs,” and the King James Version retained Wycliffe’s title, as did most of the other English Bibles that followed.

From a Jewish point of view, there is nothing particularly objectionable about this. As a modern reader of the Bible, however, I find “The Songs of Songs” greatly preferable to “The Song of Solomon.” This is not only because the introductory attribution to Solomon was clearly tacked on by a later editor.

It is even more so because the poem is for the most part the dialogue of two nameless lovers, a young man and a young woman, and while King Solomon appears in it several times, he does so as a shadowy potentate threatening their romance, whether because he covets the young woman for himself or because he represents the world of power and authority that looks askance at their youthful sexuality.

Consider the poem’s next-to-last lines: “Solomon had a vineyard at Ba’al-Hamon. He let the vineyard out to keepers — everyone for its fruit was to bring a thousand pieces of silver.

“My vineyard, which is mine, is before me. Thou, O Solomon, take thy thousand.”

It is not clear whether the last line is spoken by the young woman, who is proudly announcing that, unlike all the concubines whom King Solomon commands (“Ba’al Hamon” in Hebrew means “owner of plenty”), she will grant her favors only to her true love, or by the young man, who is boasting that his lover is his alone and will be shared with no one, not even a king.

One thing, however, is clear: This is not the song of Solomon. It is — in its beauty, its tenderness and its exquisite awareness of the excitement and vulnerability of young love — the Bible’s song of songs.

Passover’s ‘The Song of Songs’ Is Correct Name, Not ‘Solomon’s Song’