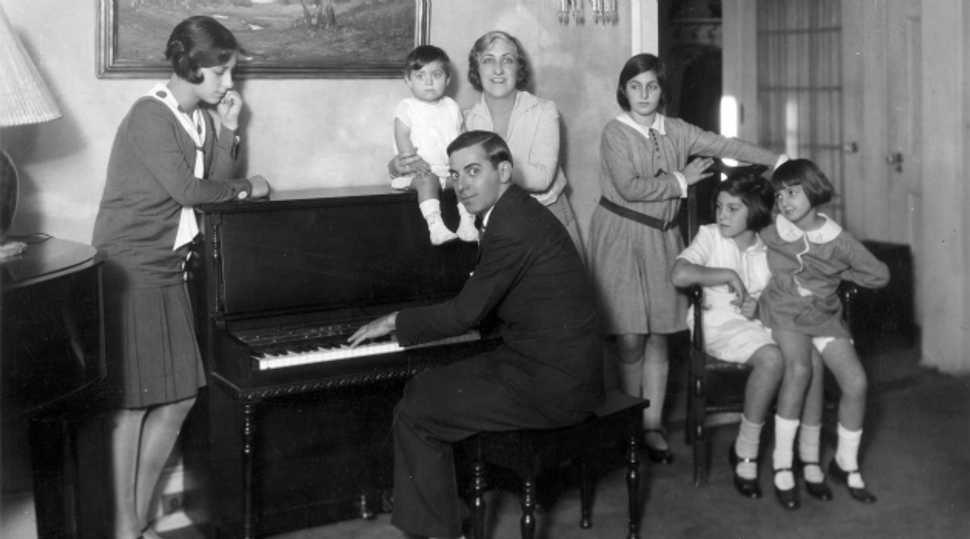 75 Years Ago: Eddie Cantor, pictured here with his family, was threatened by Nazis. Image by Forward Association/A Living Lens

As Easter-time pogrom threats hover over the Jews of Greece, immigrants from Anatolia now living in New York have received letters from their relatives, written mostly in Ladino, conveying fears of attacks based on blood libel, many of which have been signed with a postscript indicating that this may be the writers’ last letter. Most of the letters have come from Tshesma, a city with 15,000 Greeks and 30 Jewish families. Although ruled by the Turkish government, the nearby island of Khios was captured by the Greeks during the last war and is now controlled by them. Greek Jews in New York have turned to the American Jewish Committee, requesting that they intervene in some way. How, exactly, no one is sure.

Well-known radio and film comedian, Eddie Cantor, has repeatedly been threatened by Nazis and their supporters. Cantor, an active supporter of Jewish causes, told the press that “the Nazis threatened to destroy my house and kill my wife and children.” Some of the harassment has come in the form of angry phone calls received by Mrs. Cantor, who was told that if the family knew what was good for it, they would move out of Hollywood, before “Eddie winds up in a coffin.” Cantor also said that Nazi supporters have sent letters to the management of the radio stations where he works, demanding they fire him or face a boycott of the stations and of the products they advertise. For his part, Cantor says that he isn’t terribly fearful of such threats and vows to continue his work on behalf of the Jews.

The West German government announced this week that it had done all it could regarding the problem of German scientists working in Egypt to develop advanced weaponry that could be used against Israel. Nonetheless, it claimed to be open to seeing what could be done to encourage these scientists to return to Germany. The West German Confederation of Trade Unions called on the government to end the activities of the scientists and technicians, saying that “above all countries, West Germany should avoid all actions which endanger world peace or threaten the existence of the State of Israel.”