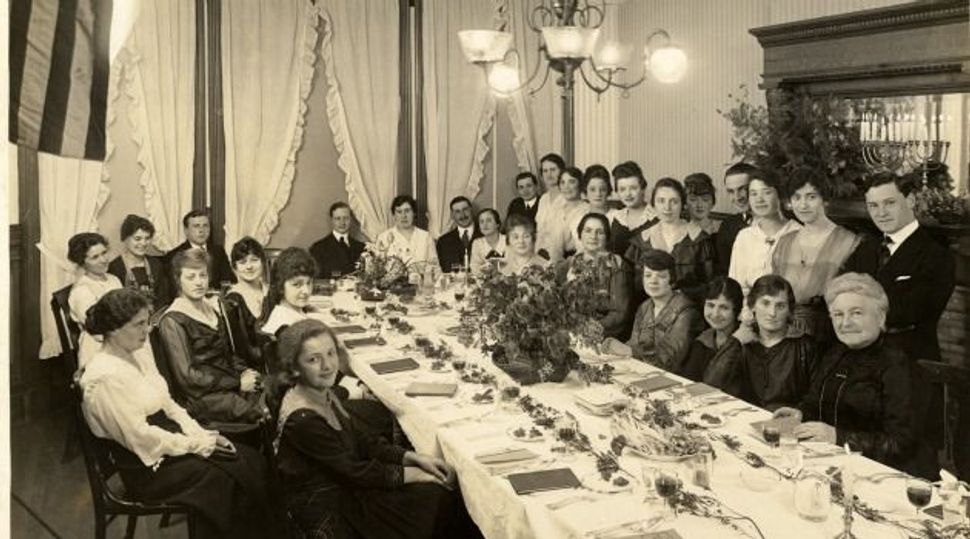 At one point or another, most of us have undoubtedly played “Jewish Geography.” The Jewish equivalent of “six degrees of separation,” the term refers to the kinship ties and social structures that bind one Jew to another. “Jewish Geography” is how we locate ourselves. It’s our very own GPS.

The ways in which locale gives birth to a distinctive cultural temperament is the leitmotif of a lively exhibition that has been on display for more than a year at San Francisco’s Contemporary Jewish Museum: “California Dreaming: Jewish Life in the Bay Area From the Gold Rush to the Present.”

A mix of documents and photographs, many of them privately owned, the display also includes a wealth of multimedia materials that run the gamut from a documentary about the Jews of the Bay Area by Pam Rorke Levy, a celebrated filmmaker, to “California Dreaming: The Game,” which is available via iPad.

In addition, the exhibition features a specially commissioned art installation, “Site Reading,” by photographer Rachel Schreiber. In it, she movingly pairs brief biographies of local residents with images of places that now look somewhat innocuous but whose history is anything but, such as Manzanar, an internment camp for Japanese Americans to which a Jewish woman voluntarily accompanied her Japanese husband. Also highlighted are places where hopes once ran high for a better way of life but are now abandoned or in disrepair, such as the chicken farms of Petaluma.

Despite the diverse modalities through which the stories of Bay Area Jewish residents are told, a common theme unifies the whole: the notion, articulated with much conviction in its promotional materials, that the “Bay Area Jewish community has taken on a character all its own.” Spirited, improvisational, sunny and optimistic, the Jews of this region reflect and sustain a sensibility that is a far cry from that of their East Coast co-religionists. And always have, it seems.

“California Dreaming” trains its sights on Ray (nee Rachel) Frank, whose penchant for preaching led to her being called the “girl rabbi.” Born in San Francisco in the 1860s, she exemplified what Jonathan Sarna calls the “effervescence of late 19th-century American Jewish religious life.” At a time, in the 1890s, when women tended to be seen rather than heard, Frank occupied various pulpits to speak out on what she took to be the limitations of the contemporary rabbinate, the lackluster character of public prayer as well as the importance of community. Ultimately, what drew people to Frank wasn’t her subject matter as much as her mode of presentation. “Before she had finished,” the San Francisco Chronicle observed in the wake of one of Frank’s performances, “her words were dropping like sparks into the souls of aroused people before her.”

Much the same could be said of the House of Love and Prayer, which also figures prominently in “California Dreaming.” Where Frank’s stock-in-trade was the lecture, this celebrated Haight-Ashbury institution of the 1960s — at once a semi-commune, a house of worship and a place to hang out — put a premium on song and on a fluid, joyful and open-ended approach to Jewish ritual. Under the direction of two former emissaries of the late Lubavitcher rebbe, Zalman Schachter and Shlomo Carlebach, the House of Love and Prayer was where the counterculture and Jewish tradition came together.

Wearing love beads and wielding a guitar, Carlebach presided over a congregation of “happy ‘hippelakh,’” who, clad in brightly colored, oversized yarmulkes and other distinctive forms of “biblical dress,” overturned many of the long-standing conventions of mid-20th century Judaism. Although the House of Love and Prayer closed its doors in 1977, the music it made spilled over beyond its precincts, touching contemporary Jews across the spectrum and irrevocably changing the rhythms of Jewish prayer and song.

Here and elsewhere throughout “California Dreaming,” which both showcases and celebrates the colorful personalities, newfangled institutions and imaginative, even free-wheeling notions of Jewish identity that render the Bay Area distinctive, history is read backward: through the lens of the contemporary do-it-yourself sensibility and the digitally enhanced perspective that characterizes this part of the world. The exhibition encourages visitors to trace a direct line from the Gold Rush of the 1840s to the House of Love and Prayer and on to G-dcast, one of the latest innovations to hail from the Bay Area. It’s as if everything on display is an avatar of the “pioneering, entrepreneurial spirit” of the West.

By accommodating history to the present, the Contemporary Jewish Museum lives up to its name as well as to its mandate. Writing shortly after “California Dreaming” debuted, New York Times culture critic Edward Rothstein put his finger on what distinguished this museum from other repositories of Jewish culture. Its “emphasis… is more on liberty than law, more on innovation than tradition.”

Under the circumstances, how could it be otherwise?