Why Jews Are Among World’s Happiest People 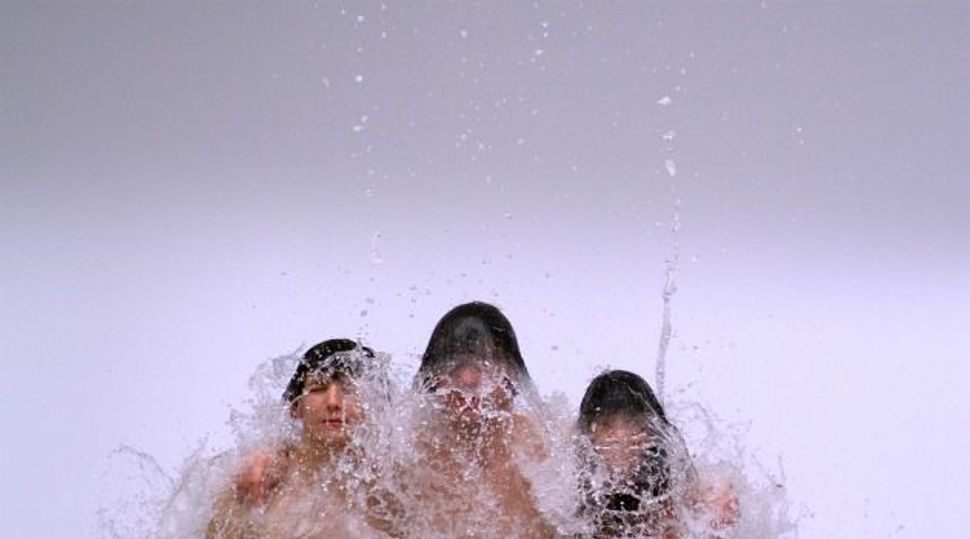 ‘Jewish” and “happy” are words not usually found in the same sentence.

But now, being Jewish and being happy are, if a bit tenuously, united at The Jewish Museum in “Six Things,” an exhibit that visualizes in sensuous three-dimensional letterforms what Stefan Sagmeister, one of the world’s most influential graphic designers, has learned about happiness.

Admitting openly that personal bouts of sadness and depression propelled him to search for answers to basic questions like “What makes people happy?” he consulted experts and read psychology texts, ultimately finding answers in the book “The Happiness Hypothesis,” by Jonathan Haidt, a professor of social psychology at the New York University Stern School of Business.

Haidt’s keys to happiness, as Sagmeister has explained in TED talks and previews of his forthcoming documentary, “The Happy Film,” are meditation, cognitive behavioral therapy and mood-altering drugs — both legal and illegal.

He’s tried them all, he says, and, along with various collaborators including his new creative and business partner Jessica Walsh, he uses the tools of graphic design — typography and image — to communicate his findings and to encourage others to try them, too.

And somehow — and this is what makes Sagmeister & Walsh different from typical designers who create logos and brochures and websites for clients — the results are museum-quality. The research has become fluid, wet, active; it’s been transformed into leotard-clad figures frolicking among bursting water balloons, goldfish swimming in bowls and boats gliding on waterways in abandoned amusement parks.

By the end of 2013, Sagmeister & Walsh’s “Happy Shows” — full-scale installations of interactive, participatory pieces, videos and sculpture — will have been exhibited at museums in Philadelphia, Toronto, Los Angeles, Chicago and Paris.

The Jewish Museum New York allotted 1,000 square feet for the artists to tell the story. So they focused on six maxims from Sagmeister’s diary: “If I Don’t Ask I Won’t Get”; “Keeping a Diary Supports Personal Development”; “Be More Flexible”; “It’s Pretty Much Impossible to Please Everybody”; and “Now Is Better.”

Obvious? Corny? It’s all in the execution: five sensuous, looped videos in which the words become floating, bursting, flaming, wiggling, splashing typographical elements including soap bubbles, Jell-O and paint on naked skin. The sixth piece, “Feel Others Feel,” is a floor sculpture in which water, activated by sound waves, ripples inside vacuum-formed white plastic letters.

There are no nicely typeset explanatory cards on the walls here. Each piece is accompanied by Sagmeister’s oft-imitated (in contemporary graphic design and advertising) handwritten text in white paint on black-painted walls. Next to the “Feel Others Feel” piece, for example, is: “Sympathetic empathy is central to most people’s understanding of love and happiness. Nevertheless, I feel I’m not good at it. Everything that happens to me is immediate, while everything that does not happen to me needs to be mediated.”

This explanation is a bit vague, but I think it means something like what Hillel said could be learned while standing on one foot: “That which is hateful to you, do not do to your neighbor.”

But Stefan Sagmeister is not Jewish. A New Yorker since 1985, when he won a Fulbright grant to study for his MFA at Pratt Institute, he was born into a Catholic family in Austria in 1962. “I was an altar boy for six years,” he says, “but as a grown-up I’ve always considered myself a reluctant agnostic.”

So what’s the connection? Why a Jewish museum? The impetus was a study by the Gallup Organization, which interviewed 676,000 people for its Gallup-Healthways Well-Being Index and reported in February 2012 that Jews, especially religious Jews, are the happiest of all religious groups in America.

Tell that to my Uncle Harry and Aunt Esther. They might have died laughing.

However, the Gallup findings were no joke to the The Jewish Museum’s new director, Claudia Gould, who as director of the Institute for Contemporary Art in Philadelphia organized Sagmeister’s first “Happy Show” there last spring. Gould took all the curators on a pilgrimage to Philadelphia to see it, explained Ruth Beesch, The Jewish Museum’s deputy director for program administration. “We loved it and wanted to do something with him here, but were all trying to figure out the Jewish link. The Gallup findings gave us permission. Stefan was fascinated too.”

Did Sagmeister find the Gallup research findings surprising, or were they in line with his other research about happiness? Or did he suspect that religious people who were brought up believing they were “God’s treasured possession” would naturally identify themselves as happy?

“When Claudia talked about the findings of that survey during the members’ opening, it caused much hilarity in the mostly Jewish audience,” he said. “My interpretation would be that a fixed set of rules is comforting to many people,” he added. “Furthermore, receiving answers to the big questions in life, who made us, why are we here in this world, would give peace of mind. The rituals bring family and friends closer. And the Sabbath seems like a great break from email, cell phones and TV, allowing couples and families to talk.”

Rebecca Shaykin, the curatorial assistant who organized the exhibit, explained the connection even more simply. “Judaism is text-based. Sagmeister is a communication designer and his work is text-based.”

To discover the essence of the exhibit, you’ve got to read along the floorboards of the space, where the designers have meticulously painted in gold, Fraktur-style lettering 158 words of text describing the Gallup survey, concluding with: “The Well-Being Index does not definitively say that religious observance leads to greater happiness. It does note that belief in a higher power, prayer, acts of charity, and neighborly love can promote a sense of belonging, alleviate stress, and lead to a positive outlook on life.”

I spent much of one Friday afternoon at the exhibit, soaking it all in and gauging visitors’ reactions. “It’s a good show for modern doubters like me, good for bringing people back to basic questions like, ‘Am I happy?’” said Stephen Lewis, a Brooklyn-based photographer. “It gets people thinking about happiness as something not frivolous.”

“There’s now smiling in museums,” added Ine Reijnen, a Dutch artist and designer who’s in New York to take painting classes at the Art Students League. “Museums don’t have to be so serious any more. And it makes you appreciate beauty in everyday objects.”

I agreed, especially after viewing Barbara Bloom’s much larger “As it were … So to speak” exhibit, which visitors walk through before entering the “Six Things” space. After taking in the ritual objects, including Torah pointers, Kiddush cups and Havdalah spice boxes, that Bloom has repurposed in reimagined surroundings, you encounter a slow-motion video of three people (Sagmeister, Walsh and Santiago Carrasquilla, a designer at their studio who helped coordinate the show) ecstatically jumping on giant purple and pink water balloons and getting drenched.

I looked again at Sagmeister’s handwriting on the wall. He has made, possibly by accident, the x in the word “maxim” look like a y. So it reads like “mayim,” water. That’s what’s it all about, then: water, liquid, movement, fluidity. Water in fishbowls, in waterways, coffee, cream, egg whites, bodily fluids (implied), in bursting water balloons — getting wet together and feeling very, very happy doing it.

“Six Things: Sagmeister & Walsh” will be on display at The Jewish Museum New York on Fifth Avenue and 92nd Street through August 4.

Ellen Shapiro is creative head of Visual Language LLC in Irvington, NY. She covers the international design scene for magazines including the Imprint online journal and writes about garden design at dig-it-blog.com. She is a contributing editor at Print magazine and Communication Arts and covers the international design scene for Print’s online journal, Imprint.*

Why Jews Are Among World’s Happiest People