How Three Jewish Boys From Wilmette Became the ‘Brothers Emanuel’ 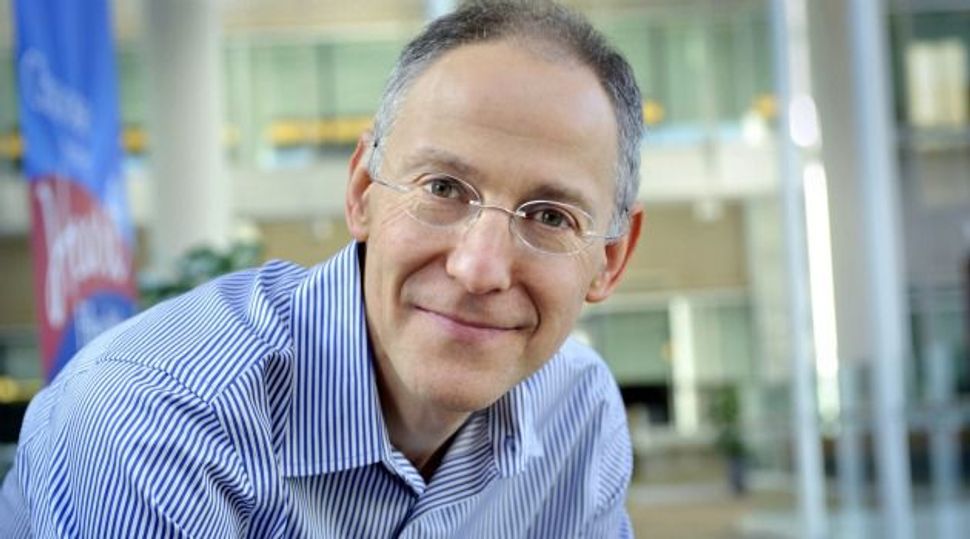 Brother Z: Zeke Emanuel is an oncologist, a bioethicist, a professor at the University of Pennsylvania and a former medical advisor in the Obama White House Image by Candace diCarlo

As near as I can tell, it was New York Times reporter Elisabeth Bumiller who brought the world’s attention to the phenomenon of the three fabulous Emanuel brothers from Wilmette, Ill. Before Bumiller’s 1997 article, people in medicine knew about Ezekiel, just as people in politics and Hollywood respectively knew about Rahm and Ariel.

But Bumiller’s feature — “The Brothers Emanuel” — connected the dots, telling the improbable tale of how each of three high-energy siblings from one relatively unknown suburban Chicago family had clawed his way to the top of his respective heap.

Ezekiel, the oldest, is an oncologist, a bioethicist, a professor at the University of Pennsylvania, a former medical advisor in the Obama White House and, if that’s not enough, a columnist for the Times. Ariel, the youngest, is a hard-charging Hollywood agent. He was also the prototype for Ari Gold, the hard-charging Hollywood agent played by Jeremy Piven on the TV show “Entourage.”

And, of course, there’s Rahm, the middle child and best known of the bunch. A former high-ranking White House aide to Presidents Clinton and Obama, he’s currently mayor of Chicago and — well, who knows what’s next.

Sixteen years after Bumiller broke the news, Ezekiel has published his version of the brothers’ story — “Brothers Emanuel: A Memoir of an American Family.” Let’s hope he sets aside some of the royalties for Bumiller — or at least her favorite charity.

Before I move on, I must make a confession. As a political columnist for the Reader newspaper, I am not now, nor have I ever been, a fan of the way Mayor Emanuel runs Chicago. Don’t get me started about how he’s closed schools, shuttered mental health clinics, fired city workers, farmed out contracts to his cronies and so forth.

That said — I love this book!

Okay, maybe not love. How about… really enjoyed. Or couldn’t put down. Or talked about obsessively, as in calling friends day and night to say, “You wouldn’t believe what these knuckleheaded Emanuel boys did next.”

How can you not have fun with the Emanuel boys? Ezekiel makes it sound like one endless party. Ski trips, cross-country car vacations, summers in Israel. There was the time Rahm locked Ari in the closet. And the time they were on this bus in Israel and Rahm had his head “nestled in the bosom of a buxom woman.” When they get together, all hell breaks loose — with F-bombs flying and everyone loudly arguing and cracking wise all at once.

“We spent the first ten years of our lives sleeping in the same room, eating at the same table, and strategizing over how to appease our mother’s tempestuous moods,” Emanuel writes. “The bond we formed growing up together is unbreakable.”

Okay, let’s be honest. I wanna be an Emanuel brother! I’d be Schmeckle, the dim-witted one. During the Seder, Ari would slug me. Ezekiel would tell me to just grow up. And Rahm would tell me to go f–k myself.You know, like he did to the president of the Chicago Teachers Union.

One of Emanuel’s goals in writing the book — aside from capturing the family’s history — is to explain how three successful children emerged from one middle-class family, or at least middle-class compared to, say, the Pritzkers.

One thing’s for certain: Their religion had a little something to do with it. To the Emanuels, Judaism is not some abstract search for enlightenment or spirituality. It’s not even certain that they — or at least their parents — believe in God. To the brothers, Ezekiel writes, Judaism is not a “faith”; it’s a “practice” in which they’re “impelled to do mitzvoth” as their parents “demonstrated in their public and personal activism.”

Moreover, the brothers learned early on that the history of the Jews is one reminder after another that the world can be cruel and harsh and filled with evil anti-Semites who persecute you if only because they can. So you’d better come out fighting just to survive.

As such, they “understood the seriousness of history and the pride and joy represented by a Jewish state.” The military presence they saw on those summer trips to Israel “made a big impression on us.” They “were in awe of the soldiers. Whenever we were in a car and saw them hitchhiking we urged whoever was driving to offer them a ride and then seize the chance to examine their rifles and pepper them with questions.”

By Emanuel’s accounting, anti-Semitism was no abstraction. He asserts that, as young boys growing up on the north side of Chicago, he and his brothers learned to fight with their fists against the local riffraff — “hillbillies” from Appalachia — who called them “kikes” and “nigger lovers.” Apparently, anti-Semitism even existed in suburban Wilmette, where they moved in the 1960s. Rahm’s bar mitzvah was “the occasion for one of the more unsettling incidents of our time in Wilmette,” when “a young man opened the door and screamed some anti-Semitic curses at the crowd.”

Helping the brothers navigate their way were Benjamin and Marsha Emanuel. This is no “Mommy Dearest.” He spares us some of the messier details that might give his parents “about two hemorrhages apiece,” as Holden Caulfield once put it.

However, Benjamin does have a family reputation for being a tightwad. And Emanuel teases his father about his homeliness: “He looked like he ran into a brick wall nose first and had slightly buck teeth.”

Benjamin was born in Israel. Originally, his last name was Auerbach. But in 1933, Benjamin’s older brother, Emanuel, was shot in the leg by a stray bullet fired during a fight between police and protestors in Jerusalem. After he died, Ezekiel’s grandparents changed “the family name” to Emanuel “to honor their son.”

Benjamin went to medical school in Switzerland, came to America to find work and wound up living in Chicago and working as a pediatrician at Mount Sinai Hospital. That’s where he met a young technician named Marsha Smulevitz, who was born and raised in Chicago. And, well, you can figure out the rest.

As for Marsha, she drove the boys hard. Having sacrificed her ambitions — she wanted her own career in politics — she stayed at home to raise the boys, pushing them to succeed. “As we grew older we became frustrated with our own failure to make her happy. Her disappointment, tearfully expressed, made us… feel both guilty and, since guilt works this way, angry about feeling guilty.”

All in all, they come across as loving, protective and nurturing parents. (Curiously, Emanuel makes no mention of Shoshana, his 39-year-old adoptive sister, who figures prominently in Bumiller’s article.)

If there’s a star to this story, it’s Marsha, who’s portrayed as a dedicated civil rights and anti-war activist. She preached tolerance to the boys, taught them to stand up to bullies on behalf of the weak and took them to marches and protests, even when they were very young. According to Emanuel, Marsha took her three sons — then 9, 7 and 5 — to the infamous 1966 open-housing march in Chicago where an angry mob hurled stones at Martin Luther King Jr.

Of the three, Ezekiel was the best student. Ariel was street-smart and quick with his fists, always pounding away at some kid, making one boy unfortunate enough to have crossed him “cry for mercy.”

Rahm was the quiet underachiever whose turnaround came in the summer of 1977, after a near-death experience. An untreated cut to his finger led to a “bacterial infection that “invaded the bone” and spread “into his bloodstream and the rest of his body.”

“The extremely high fevers made Rahm suffer from hallucinations and episodes of babbling and angry outbursts. He would later tell me, ‘I woke up one night screaming at Mom, unloading on her about how she loved you more and about how she treated me as the second son.’”

Eventually, the doctors amputated the finger: “Rahm told me much later that ‘nearly dying was the single most important thing in my life.’ He said it changed him from a quiet, relaxed kid into a young man filled with the need to succeed and make something of himself.”

What to make of all this? Well, I have a hard time reconciling the young Rahm, who was taught to stand up for the weak, with Mayor Emanuel, who lobbies for tax breaks for the wealthy while closing mental health clinics that serve the poor.

Still, it’s a fun read. And, ultimately, it gave me a good idea of why the Emanuel brothers went so far. From the time they were born, they were pushed to go get what was theirs. They learned to view life as a struggle for survival in which the strong dominate the weak. So it’s best to be strong — if you’re lucky enough to have a choice.

Ben Joravsky has been writing about Chicago politics for over 30 years. A staff writer for the Reader newspaper, he’s written several books, including Hoop Dreams and The Greens. He’s also writes for The Third City, a daily humor blog that “rarely lies to the American people.”

How Three Jewish Boys From Wilmette Became the ‘Brothers Emanuel’