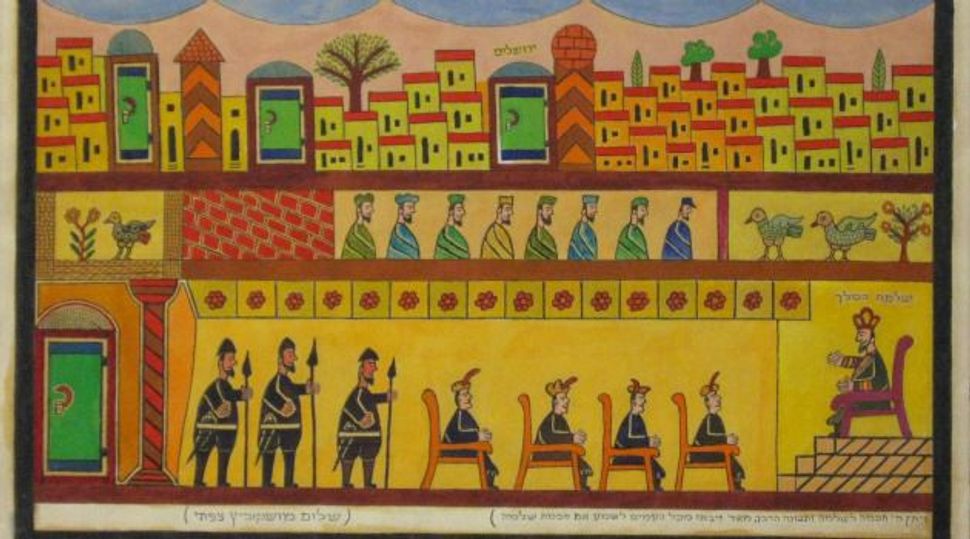 When she was seeking out works for what would be the first exhibition of outsider and naive art in Israel, Ruti Direktor, chief curator at the Haifa Museum of Art, received a negative reply from the Collection de l’Art Brut (Collection of Raw Art), in Lausanne, Switzerland.

The administrators of the collection (which was initiated by French artist Jean Dubuffet, who also coined the term “Art Brut”) refused to lend artworks to the Haifa Museum, stating that works from the collection would be lent only on the condition that they are exhibited alone and never with naive or folk art.

Direktor, however, was intent on showing local naive and folk artists, as well as established international outsiders, so she proceeded with her initial intention, but the scenario was typical of what could be seen as a purist approach occasionally adopted by those involved in the field of outsider art. For Direktor, who has long been an admirer of that type of art, the distinctions between it and naive and folk art are not quite so distinct.

The resulting exhibition, made up of works on loan from the American Folk Art Museum as well as from private collections, the Israel Museum, Jerusalem and Tel Aviv’s Engel Gallery, presents an exotic mix of 27 international and Israeli outsider, naive and folk artists. The haunted and unsettling works of classic outsiders such as Henry Darger and Morton Bartlett are placed in stark contrast to the more decorative and simpler folkloric forms of Shalom Moskovitz, better known as Shalom of Safed, and Moshe Elnatan, to name but two.

Outsider art first began to attract attention in the early part of the 20th century. Studies carried out by European doctors on patients, who felt compelled to create art, were published in lavishly illustrated books. These studies influenced such artists as Paul Klee, Max Ernst and even Picasso. But Dubuffet, more than any other artist, actively sought out such art and was primarily responsible for bringing it into the public spotlight, eventually amassing a collection that numbers in the thousands and is now permanently housed in the aforementioned museum in Lausanne.

For the most part, these artists were self-taught and worked outside what would be considered art-world norms, having no contact with museums or galleries, and paying little heed to the traditions or techniques of the Western art-historical canon. Many of them were known to have suffered from mental disorders and inhabited society’s peripheral regions, living off-the-grid lives, often creating their work in secret, with a quiet, and at times obsessive, determination.

From the outset, the works executed by these artists have been intertwined with their strange life stories, their disturbed inner worlds reflected in the often compulsive stylizations and strange visions of their creations.

For the purposes of the exhibition, Direktor wanted to show connections among outsider, folk and naive art. These are seen particularly with regard to technique — for example, a general disregard for traditional rules of perspective. One of the most striking features seen in the works of several of the outsiders is that of horror vacui, a Latin phrase translated roughly as “fear of empty space,” often resulting in no part of the paper or canvas left bare or without a mark. This tendency is seen in the works of Adolf Wolfli, Aloise Corbaz and Carlo Zinelli as well as in the miniatures of Edmund Monsiel.

Several of the artists whose work is exhibited here were diagnosed schizophrenics and were known to have experienced hallucinations and visions. The concentrated array of figures, faces and designs, seen particularly in the works of Wolfli and Monsiel, are rendered with a seemingly obsessive attention to detail.

The paintings of Minnie Evans and Henry Darger feature wonderfully vibrant colors. Of all the artists exhibited, it is Darger whose works are likely to attract the most attention. Having been confined to what was referred to as an “institution for feeble-minded children” for the greater part of his youth, Darger lived as a virtual recluse for the remainder of his life. Through an illustrated and voluminous manuscript stretching more than 15,000 pages and several hundred paintings, Darger created one of the strangest and most convoluted oeuvres in art history.

In the large-scale paintings presented, Darger’s apocalyptic tale plays itself out against a backdrop of Civil War battlefields and pastoral landscapes. The lead characters, a group of seven named The Vivian Girls, lead hordes of young girls in an ongoing struggle against an evil regime. Darger’s storylike scenarios are fascinating and beautifully colored; the whole effect is a kind of dark fairy tale.

For all the strangeness and singularly personal visions seen in the outsider works, none is quite as eerie or disturbing as the 15 photographic works on show by Bartlett. He is considered an outsider photographer, although this description does not quite accurately describe the elaborate process involved in his work. A graphic designer by profession, he devoted his spare time to fashioning a series of made-to-scale, remarkably lifelike dolls, which he then photographed, the end product being a kind of theatrically staged scenario.

His only subjects, young boys and girls alternatively naked or clothed in cutesy attire and arranged in a variety of childlike poses, gave voice to hearsay, never confirmed, about his sexual preferences. These rumors were in no little way helped by Bartlett’s own statement about his creations: “My hobby is sculpting in plaster. Its purpose is that of all proper hobbies — to let out urges that do not find expression in other channels,” he wrote in 1957. The photographs and the figures make the viewer uncomfortable, yet have a strangely compelling power. It is as if we have stumbled onto a peep show, or a carnival sideshow, meant only for its creator’s eyes.

The best works of the outsiders, for all their originality and vitality, reveal off-kilter and, at times, insular mind-states. The inclusion of the local naive and folk artists and the more idyllic scenes rendered in their work have a charm and lightness not present in the more intense visualizations of the outsiders. The world of folk and naive art, referred to as the peaceable kingdom by the art critic Harold Rosenberg, is a more innocent and decorative place.

The story of Shalom Moscovitz, also known as Shalom of Safed, the best known of the local artists on view, has become part of Israeli art world folklore. Moscovitz was an artisan who worked as a scribe, a stonecutter and a billboard painter, to name only a few of the trades to which he applied himself. His vividly colorful paintings incorporated biblical scenes and the local landscape, often placing them in horizontal rows atop one another in a manner similar to Egyptian hieroglyphic formations.

The painter Yosl Bergner, who at the time also lived in Safed, discovered Moscovitz. As the story goes, while visiting Tel Aviv, Bergner chanced upon some wooden toys that had been carved by Moscovitz. Inquiring as to their maker, he was told it was a religious man living in his very town. After his return, Bergner met with Moscovitz, brought him paints and paper and encouraged him to take up painting. The two men remained in contact until Moscovitz’s death, in 1980.

The colorful scenes in Moscovitz’s paintings give way to more muted hues in the paintings of Shimshon Lemberger and Natan Heber. Both were born in Poland and immigrated to Palestine in the 1930s. Bittersweet memories of the Old Country are evoked in scenes of family life, such as Lemberger’s “Baking Shmurah Matza.” This is not, however, the shtetl of the bustling marketplace or joyfully dancing Hasidim, but a more somber place where blank faces seem to peer out at us from town squares or while engaged in their daily tasks.

Using local sandstone, found materials and a process of trial and error, Kahalon has built and decorated his home and many variously shaped structures, tunnels and sculptures in and around the area between cliff and beach at Seidne Ali, in Herzliya. Kahalon has worked for the best part of 40 years constructing a unique artistic and ecological environment for himself and his family.

The sheer originality in Kahalon’s endeavor and indeed in most of the artworks in the exhibition is what continually attracts us to outsider and folk art. Their works, which more often than not went undiscovered or acknowledged during their lives, can now be seen in major art museums throughout the world, prompting some art critics and academics to call for these works to be integrated into the collections of the modern art pantheon.

Can the best of Darger, Wolfli and Bartlett, not to mention others, and the best that folk art has to offer, stand beside the work of such artists as Picasso, Ernst and Klee? Certainly, on the evidence of this exhibition, the works more than hold their own.

Graham Lawson is a freelance writer based in Tel Aviv. He writes articles connected to the Israeli art scene.