Nothing Beat the Spa for Wealthy 19th Century Jews 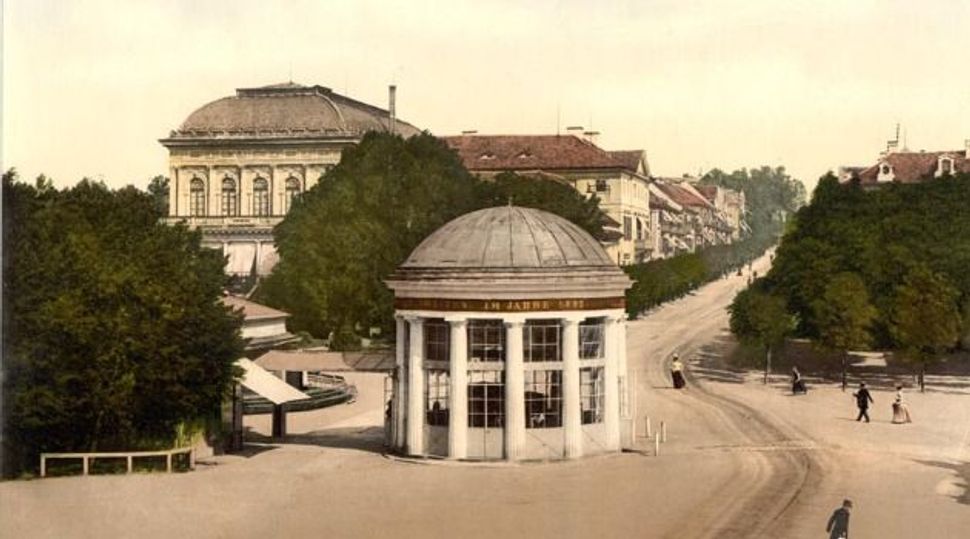 Having a Lovely Time, Wish You Were Here: Carlsbad was one of several spas where wealthy Jews in Central and Eastern Europe went to take the waters. Image by Wikimedia Commons

The upper crust of Eastern and Central European Jews in the 19th century had a solution when their lives became too stressful. They opted for health cures in spa towns, especially at one of three tourist paradises built around local natural mineral waters full of dissolved carbon dioxide that were considered particularly salubrious. In the German language, for the hotels were often owned by Germans, the spas were called Karlsbad, Marienbad and Franzensbad. All three were located in what is now western Bohemia, the Czech Republic. “Next Year in Marienbad: The Lost Worlds of Jewish Spa Culture” offers a fascinatingly erudite glimpse of the joys and sorrows of well-to-do Jews on holiday over a century ago.

Written by Mirjam Zadoff, who teaches Jewish history and culture at the University of Munich, and ably translated by William Templer, the book describes how tourists supposedly seeking health cures would instead gorge on goodies in coffeehouses and delicatessens: “It was a land of Cockaigne where the sense of vacationing in style gave one the impression that the pretzels were crispier, the coffee was better, and even the dietary dishes were tasty.”

Among those Jews in search of crispy pretzels were many not normally identified as sybarites, such as Karl Marx, author of “The Communist Manifesto,” who visited Carlsbad in 1874 to treat an enlarged liver, bad nerves and insomnia, doubtless all caused by capitalism. Then there was Franz Kafka, who in 1916 wrote to his then-fiancée Felice Bauer: “Karlsbad is rather pleasant, but Marienbad is unbelievably beautiful. A long time ago I ought to have followed my instinct which tells me that the fattest are also the wisest.”

Kafka jotted in the margins of a spa guidebook offered to his friend Max Brod more advice on how to be wise and fat: “Of course Marienbad is the only place to go! Breakfast at the Dianahof (fresh eggs, honey, milk, butter), then quickly to the Maxtal for a snack (sour milk), quickly on to the Neptune where Headwaiter Müller presides over lunch, to the fruit vendor to stock up on fruit, a brief nap, then a bowl of milk at the Dianahof (place your order beforehand), quickly to the Maxtal for sour milk, on to the Neptune for supper, then sit awhile on a bench in the public park and count over your money, then to the pastry shop…”

Just how many of the exuberantly gorging guests at these spas were Jewish remains debatable. Zadoff cites one 19th century study which claims that only 10 percent of tourists in Karlsbad were Jews, while another authority asserts that fully half of the city’s visitors were Jewish. Certainly a considerable population of Jews seemed to frequent the places, as the pioneering American Jewish costume designer Aline Bernstein wrote with some hyperbole in 1928 from Karlsbad to her lover, the novelist Thomas Wolfe: “I’ve never seen women so beautifully dressed anywhere, the finest from all over the world, and Jews, Jews, Jews, from the richest to the poorest.”

Strictly speaking, indigent Jews were unable to afford spa holidays, but anyone who could pay for even a cheap holiday package was motivated to do so. It was essential not just to live like the rich and famous, but to rub elbows with them, too. One favorite celebrity among Jewish travelers was England’s Prince of Wales, later King Edward VII. Queen Victoria’s son counted such Jewish financiers as the Rothschilds, Maurice de Hirsch and Ernest Cassel among his friends, and shrugged off public criticism about his socializing with Jews. In Sholem Aleichem’s 1911 novel “Marienbad,” the narrator states:

“When I was last in Marienbad, I remember what a fuss was made over Edward, who ate gefilte fish in the biggest Jewish restaurant. Not just the owner of the restaurant — a fat, well-fed German with a nose like a cucumber — was honored to have the English King eat fish at his place, but every guest here for the cure, every Jew, was proud that he was dining in the same place as the British monarch.”

Another indefatigable traveler, Mark Twain, described the Jews he saw at Marienbad in 1891 with an unfazed approbation worthy of Edward VII:

“Almost the only striking figure is the Polish Jew. He is very frequent. He is tall and of grave countenance and wears a coat that reaches to his anklebones, and he has a wee curl or two in front of each ear. He has a prosperous look and seems to be as much respected as anybody.”

In 1898, the wee curls of the Hasidim in Karlsbad likewise bemused the Dreyfusard French politician Georges Clemenceau. In his “At the Foot of Sinai,” a key study of Jewish communities around the world, Clemenceau wryly attributes meteorological significance to the hair of pious Jews:

“As the curls have the quality of curling up in dry and straightening in damp weather, they present infallible means of anticipating atmospherical disturbances. As soon as I see them straighten, I take my umbrella and have never cause to regret it.”

At these spas, Jews were also the targets of anti-Semitic hatred, by such noted writers as the German novelist Theodor Fontane, who in the 1890s wrote from Karlsbad to friends about the “lower Jewry… caftan Jews with their side-locks, displaying defiance and cockiness, who make every path and trail here unsafe.” Such reactions nurtured a small trade in anti-Semitic postcards, upon which turn-of-the-century goyim, and even some Jews, wrote home to friends who were intended to chortle over the caricatures. These became so common that collectors even coined a term for them, Judenspottkarten (or Jew-mocking cards), rife with toilet humor and racist captions such as “Stock Market Jew.” Jews were indeed gradually made unwelcome at Karlsbad, Marienbad and Franzensbad, starting with off-season wintertime violence before the turn of the century. Even so, the anti-Semitism in the grandest spas was considerably less virulent than in smaller, more rural German spas which by 1900 advertised themselves as “Jew-free localities.”

Things grew worse in Karlsbad, Marienbad, and Franzensbad in the 1930s until many locals could also proudly declare that their spas were “Jew-free.” Since the fall of the Berlin Wall in 1989, the three spas still extant have often been referred to by their Czech names, Karlovy Vary, Mariánské Lázně and Františkovy Lázně, respectively. Zadoff attempts to end on a positive note, explaining: “Once again, blue-white flags and banners hang from the hotels, and many Israelis come to take the cure or for a pleasant detour on the way to Prague.” Yet readers of Aharon Appelfeld’s evocative novel “Badenheim 1939,” set in the tragic final act of European Jewish spa tourism, may wonder whether this rise-and-fall-and-rise-again scenario is not overly optimistic.

Nothing Beat the Spa for Wealthy 19th Century Jews