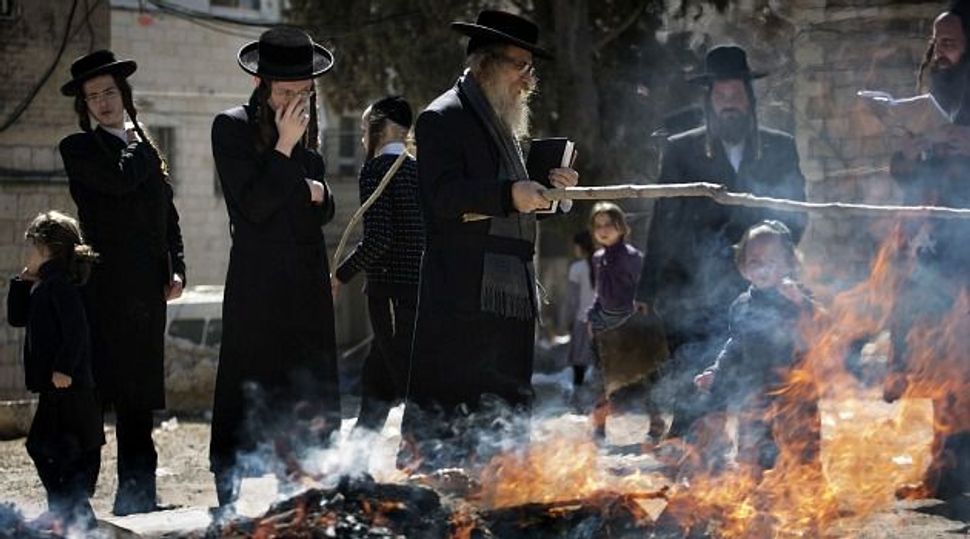 Clear and Present Danger: Yuval Elizur and Lawrence Malkin predict dire consequences as a result of the struggle for power between the sectarian and the secular. Image by getty images

● The War Within: Israel’s Ultra-Orthodox Threat to Democracy and the Nation
Yuval Elizur and Lawrence Malkin
Overlook Press, 224 pages, $26.95

As my 17-year-old son said, “This book could double as Yair Lapid’s Tanach.” And he’s not wrong. One of the many merits of Yuval Elizur’s and Lawrence Malkin’s “The War Within: Israel’s Ultra-Orthodox Threat to Democracy and the Nation” is the timing of its publication, coming, as it does, in an era of Orthodox Haredi vigor and triumphalism, and at the cusp of a new government that could curb some of the sectarian Orthodox power in Israel. 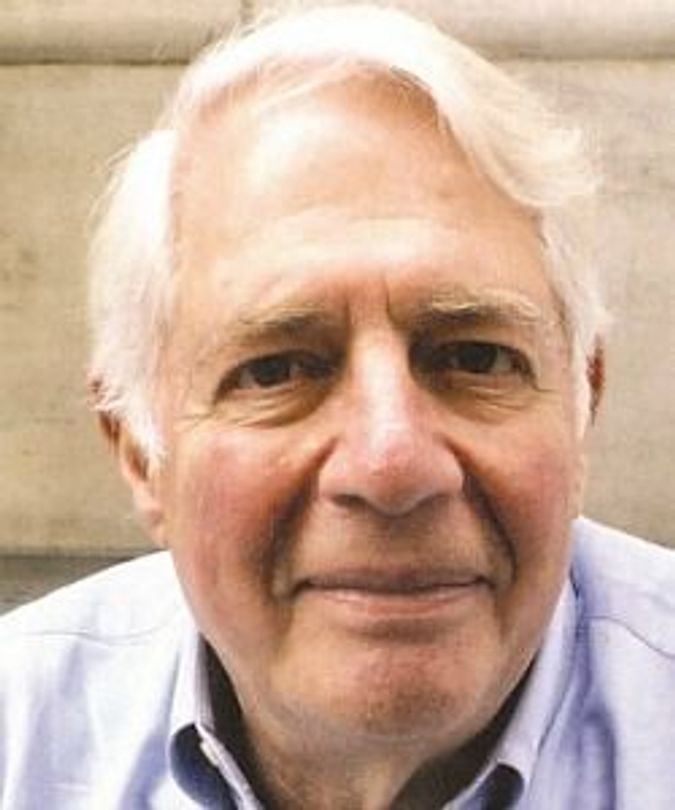 Today, the eponymous “threat” to Israeli society comes, “The War Within” argues, from the world of sectarian Israeli “Haredim” — the “ultra-Orthodox,” as the Western press crudely characterizes them; the term “sectarian” is much preferred — religious Jews who shun the interaction of traditional Judaism and the contemporary secular world.

Veteran journalists Elizur and Malkin offer a basic, and bleak, thesis: Absent a separation of religion and state in Israel, the very future of Israel itself, to say nothing of America-Israel relations, will be jeopardized by sectarian/Haredi excesses in crucial areas of domestic public policy in Israel and, by extension, hegemony over the secular state.

“The War Within,” written before the 2013 Israeli elections, presciently makes the case for the reformist stance of Lapid’s Yesh Atid and for Naftali Bennett’s Habayit Hayehudi parties, new to the governing coalition in Israel.

That “The War Within” appears in 2013 is not surprising. Of the numerous fault-lines in Israeli society, the fissures between sectarian/Haredi and secular — and especially between sectarian and moderate Orthodox — are uncommonly damaging to the fiber of the society. What is a tad puzzling is that “The War Within” is the first book since David Landau’s 1991 “Piety and Power” to examine the resurgence of “Haredism” and its sociopolitical impact in Israel and worldwide.

Elizur and Malkin both expand on and narrow the discussion of the sectarian surge. “The War Within,” on one level, is a primer on the genesis and history of this ongoing, indeed escalating conflict. On a more basic level, the book is a bare-knuckles brawl in which Elizur and Malkin go 15 rounds with the sectarian/Haredi world in Israel.

Elizur and Malkin ask a basic question: How did it happen that the sectarians in Israel were able to hijack central religious and political processes and thereby secure the ability to sway the destiny of much of the Israeli body politic? Who, in fact, are the “Ultras,” who absolutely possess the authors and whose outsized presence in Israeli society is, as the authors assert, morbific, even toxic?

“The War Within” develops a historical and sociological context for the narrative of Haredi outsize influence (the sectarians are a minority in Israel) over public policy, beginning with David Ben-Gurion’s status quo ante deal with the religious parties in 1948, guaranteeing them control over matters of religion. (Incisive indeed is the comment of The Hebrew University of Jerusalem’s Aviezer Ravitzky that each side, religious and secular, shared a common but erroneous conviction that it owned the future, and the other side would disappear!)

The context sets the stage for seriatim chapters that address in detail the crisis in education in the sectarian communities; the employment nightmare, which has led a substantial percentage of the population to opt out of the labor force; discrimination against women, and — very much in the news — the question of draft deferments for Haredi men studying in yeshivas.

Elizur and Malkin, always and well, develop a historical context for each question discussed. And the discussions go beyond the usual palaver: “Oh, what do you expect from those Orthodox obscurantists?!”

Especially compelling are the two chapters on the question of exemption for yeshiva students from requisite military service in the Israel Defense Forces. What was originally a temporary exemption granted in 1948 to 400 yeshiva students has become a national problem as some half a million sectarian youth do not serve in the army. Exacerbating the problem is the fact that the students do not work, because taking a job would mean forfeiture of their exemptions.

Elizur and Malkin trace the story from 1948 and earlier, through the political deals made over the decades with Orthodox parties and power centers, as the sectarian Orthodox community exploded demographically, to the expiration in 2012 of the Tal Law, which extended on a temporary basis the exemptions.

The obverse side of the sectarian/IDF story is that of those Orthodox who do serve in the army. “The War Within” rehearses this narrative in the context of how the Religious Zionism of an erstwhile centrist and responsible Mizrachi/National Religious Party was hijacked by Religious Zionist extremists who make common cause in some areas with Haredi sectarians.

A substantial chunk of the sectarian/Haredi problem is the fact that the rabbanut — the Chief Rabbinate of the State of Israel — has in recent years been under the thumb of a few sectarian rabbis, and has become morally, politically and religiously bankrupt. This issue, not addressed by Elizur and Malkin, is especially rueful for those who recall the Religious Zionism, represented by the centrist, responsible, Mizrachi/National Religious Party of decades past, before the “Religious” got pinched by the sectarians and the “Zionism” got pinched by the settler movement.

At bottom, Elizur and Malkin assert, it’s all about politics and purse: Israel’s parliamentary system has often insisted that Haredi support is key when building a governing coalition; the sectarian influence has all too often forced the majority to kowtow to the Haredim.

There is occasional factual confusion in “The War Within.” “Many” Haredim did not fight in the pre-State Etzel (Irgun Zvai Leumi) — the underground Zionist-Revisionist Irgun, which regarded partition of Palestine as an unsatisfactory compromise. It was Lehi (Lohamei Herut Yisrael) — the so-called Stern Group, far more radical than the Irgun — that contained, remarkably, Haredi fighters together with units from Agudat Yisrael and even the far-left Hashomer Hatzair. The Irgun was all about political ideology; Lehi was united in one goal: Get the British out of Eretz Yisrael — Palestine. The point: ideological divisions informed the pre-State Yishuv (the Jewish community in Palestine), and continued to do so in the early years of the state. Remnants of ideological struggles inhere in the religious warfare of 2013.

And on the basic question of when, indeed, did “the war within” begin, the authors assign the origins of the struggle to many decades in the past. In reality, while there were always conflicts, there was yet a permeability in the boundaries between those then known as Haredim, Agudat Yisrael and the more centrist Mizrachi Orthodox. The true beginnings of the “war” are more recent, when those boundaries solidified.

And it is a mistake to conflate, as do Elizur and Malkin, the entirely sectarian Satmar group with the rejectionist Neturei Karta, which celebrated the Palestine Liberation Organization and meets with Mahmoud Ahmadinejad.

The Satmar stance on Zionism is not messianic, but rather based on the idea that Jews ought not premise their identity and continuity on contemporary “isms,” including Zionism, but on normative Halacha. The authors confuse various groups; the reality is that sectarian Haredism is hardly monolithic.

Events of recent weeks bring the wars of “The War Within” into sharp focus. The recently contoured coalition government in Israel recognized for the first time, as government policy, the salience of the sectarian issue, and designated as priorities housing, education, and army service. And, recent news stories report sectarian Haredi rebels in Jerusalem urging army enlistment of young Haredim.

Finally, the forthcoming election of a new chief rabbi offers hope, albeit scant, for significant change in the religious landscape in Israel. There is a cadre of centrist Orthodox rabbis in Israel who insist that the only solution to the Haredi hegemony over Israeli religious life is to develop a parallel rabbinic structure to the Chief Rabbinate.

But centrist candidate David Stav, a leader in the rabbinical organization Tzohar, which seeks reforms of the Israeli Rabbinate, has vowed a major transformation of the Chief Rabbinate, a re-examination of the position of women in religious and social life, an examination of sectarian Haredim and the draft, and a new attitude toward Reform and Conservative Judaism in Israel. Sounds great.

This, however, is the key question: Will the Chief Rabbinate continue to take its marching-orders from the Haredi leadership?

The “religious wars” recounted compellingly in “The War Within” may only be beginning. Stay tuned.

Jerome Chanes, a fellow at the Center for Jewish Studies of the CUNY Graduate Center, is the author of four books on Jewish history, sociology and public affairs.