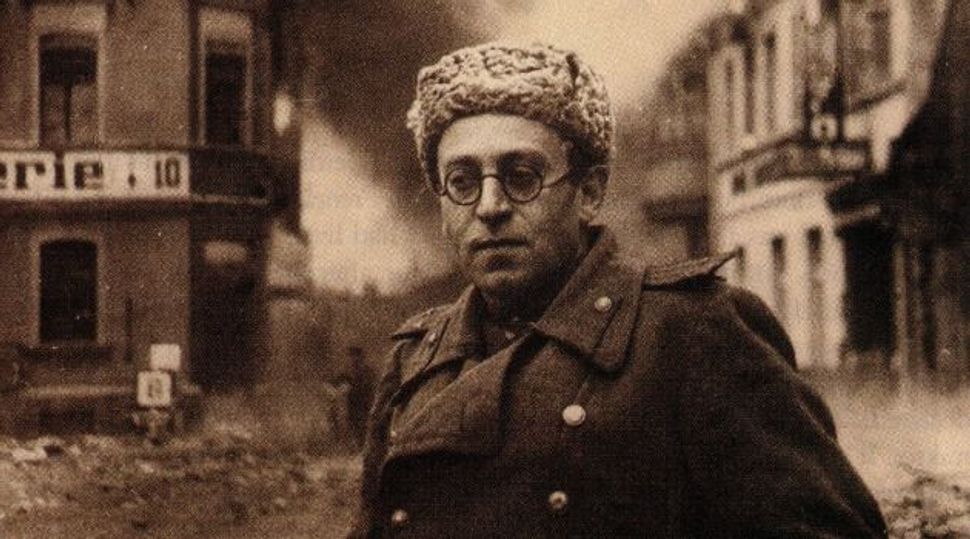 Chronicler of a Death Foretold: Author Vasily Grossman opened the world?s eyes to atrocities in Treblinka. Image by Wikimedia Commons

In 1961 Vasily Grossman traveled to Armenia from Moscow to edit a long war novel by Rachiya Kochar. Grossman was not the first renowned Russian writer to make such a trip; Osip Mandelstam had visited before him, recording his observations in “Journey to Armenia” (1931); and almost 100 years earlier, Pushkin had made his own Caucasus expedition, joining the Russian military campaign against Turkey and later chronicling it in “A Journey to Arzrum.” Grossman did more than just edit during his two-month sojourn; like Pushkin and Mandelstam, he wrote about his experiences in the country. The result, “An Armenian Sketchbook” — published in English for the first time, and expertly translated by Robert Chandler — is arguably Grossman’s most personal work.

Vasily Semyonovich Grossman was born in 1905 in Ukraine. His early literary efforts garnered praise from the likes of Maxim Gorky and Mikhail Bulgakov. During World War II he switched to journalism, reporting for Red Star on crucial battles and events, including Stalingrad and the fall of Berlin. His seminal eyewitness piece “The Hell of Treblinka” helped open the world’s eyes to Nazi atrocities. He returned to fiction after the war, but incurred the wrath of the Soviet authorities with his two masterpieces, “Everything Flows” and “Life and Fate.” Both novels were deemed anti-Soviet (as indeed was the author) and were published only in 1988, twenty-four years after Grossman’s death.

“Journey to Armenia” takes us from Grossman’s arrival in the country to his departure. Some of the 12 chapters are little more than anecdote-filled vignettes, whereas others delve deeper and are accompanied by Grossman’s tangential thoughts and reflections. Alighting in Yerevan, he masterfully conveys a traveler’s first impressions of an unfamiliar city: He is disoriented, but also endowed with a heightened awareness, a “visual equivalent of nuclear energy.” He explores the capital, lingering to survey its colossal statue of Stalin before deciding that Yerevan’s soul is to be found in its inner courtyards.

“Here we see the city as a living organism, its outer skin stripped away,” he writes.

It is this eye for quirky detail that makes “Sketchbook” such a delight to read. As Grossman travels he engages the natives in conversation (despite supposedly being able to speak only two words of their language) in an attempt to understand the country’s psyche.

Many Armenians share wine and stories with him. Some are survivors of the gulags and resemble Grossman’s protagonist in “Everything Flows,” a former camp prisoner struggling to readjust to normal life after 30 years of incarceration. Chats with others lead in turn to conversations with himself, an enlightening series of question-and-answer sessions that reveal Grossman just as eager to explore his own mindset as that of his subjects.

When Grossman ventures off the beaten track and takes us down a side avenue of thought, the book is elevated from mere travelogue into literature. His mission to disprove the stereotype of the Armenian as “a huckster, a voluptuary, a bribe-taker” results in a fascinating disquisition on nationalism and national identity. A funeral prompts him to muse on mortality, suicide and the Turkish genocide. And after marveling at architecture — from humble collective farmhouses to grand monasteries hewn from mountains — we are regaled with penetrating insights on beauty and art.

Best of all are the meditations on religion. At one point, Grossman, “an unbeliever,” admires a church and thinks, “But perhaps God does exist.” He is prepared, however, to concede only so much, and believes we should “call on the Creator to show more modesty.” After all, “In whose image were Hitler and Himmler created?” He comes to the mordantly witty conclusion that God created the world too hastily: “Instead of revising his rough drafts, he immediately had his work printed.” Thus “Siberian permafrost” and “the soul of Eichmann” are “typing errors, inconsistencies in the plot.”

There are several “inconsistencies” in Grossman’s prose. For example, some descriptions are flatly mechanical (although to be fair, this could be more a translation problem). But these are rare lapses. In the main, Grossman impresses, at times dazzles, when highlighting local color or crystallizing ideas. Mount Ararat “seems to grow not out of the earth but out of the sky.” Sheep eyes are “glass grapes” (whereas real grapes in a market are like “Baltic amber”). During one sober reflection, he explains how the Gestapo took away Jewish women and children to not be “killed” but rather “destroyed.”

Grossman writes just as candidly about himself as he does about the country he is visiting. On the way to a wedding, after a meal of mutton and vodka, his bowels begin to protest, and he confesses to feeling more afraid than he was during the Battle of Stalingrad. After a night spent drinking a particularly potent cognac he wakes in a sweat: “I was dying.” The meticulous description of his hangover should be amusing, but instead it is poignant, for, unbeknown to Grossman, he was in fact dying: The cancer that would kill him three years later had already stealthily taken hold.

Grossman died a dissident and never got to see his book in print. “An Armenian Sketchbook” fell afoul of the Soviet censors and, like his two masterpieces, was published only posthumously. At first glance, “Sketchbook” seems a trivial work when compared with the rest of his oeuvre. A hodgepodge collation of Armenian customs, rituals and picture-postcard views can’t compete with those searing depictions of Stalingrad, the Shoah and the Ukrainian Terror Famine. Grossman, however, emerges as a cross between an informative tour guide and a captivating travel companion, showcasing a wonderful acuity in all that he sees, and revealing a disarming intimacy in each of his considered digressions. We follow him and hear him — and in the process, not only does Armenia come alive, but also Grossman himself.

Malcolm Forbes is a freelance writer and critic. Born in Edinburgh, he currently lives in Berlin.