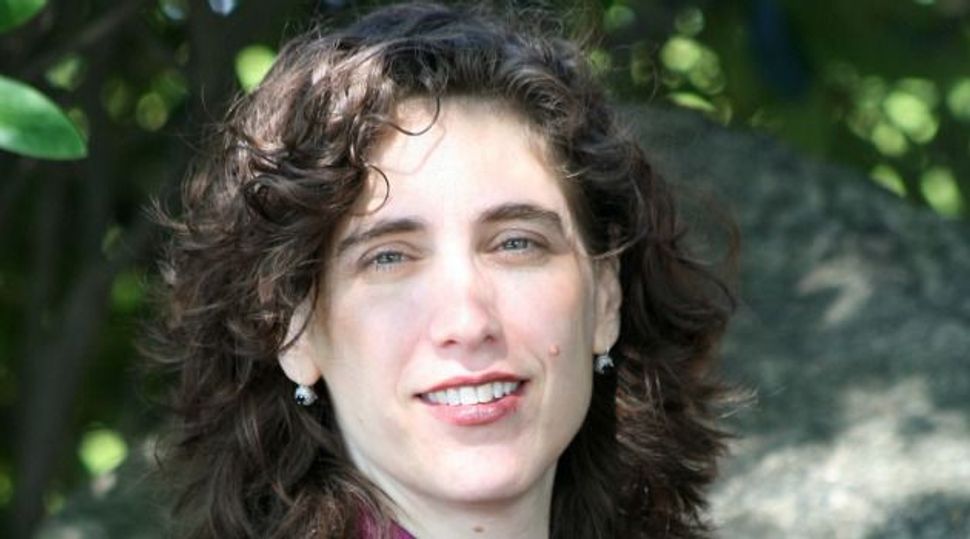 Wayfaring Pilgrim: Alanna Cooper, author of Bukharan Jews and the Dynamic of Global Judaism, first traveled to Uzbekistan in 1993. Image by Courtesy of Alanna Cooper

I don’t remember the name of the man who sold the dictionary to me. He was one of the many people I met in the 1990s who was getting rid of his belongings in advance of his migration from Bukhara. He invited me to his home and showed me the small stack of books on the floor of his empty living room.

I couldn’t quite make out what they were, except that they had been printed in Jerusalem about a century earlier. The man wanted only a few dollars for them, so I took them with me.

The dictionary was the most curious of the lot. Less than 50 pages long, with translations of just 700 words, its ambition lies not in its length but in its breadth. Six columns run across each page: Hebrew, Persian, Russian, Spanish, Arabic and Turkish.

Bukharan Jews are often represented as an ancient, remote community long out of touch with Jews in other parts of the world, a group that history somehow passed by. This slim, brittle dictionary tells quite a different story.

My journey to Central Asia began here in America with questions about my own Ashkenazi family. My father kept an old portrait of his relatives in the top drawer of his dresser. I occasionally took it out and studied it. These are my cousins, I would think, examining the many blurry faces. But I did not know their names or even who belonged to whom.

Someone had sent that photo to my grandfather in the 1920s, shortly after he immigrated to the United States. I could not read the note scrawled on the back, which was in Yiddish, and that was all I knew about the family he had left behind in Ukraine.

My grandfather had passed away when I was a child, and I never learned anything about the fate of his siblings or their children. I grew up with a void, a hole in my family and my history, and even a missing piece in my understanding of who I was.

Then, in 1991, the Soviet Union dissolved. My father’s cousins found us, and we exchanged a few letters. They resettled in Israel, and it so happened that I was planning a trip there. I took the long bus ride up north from Jerusalem, where I was staying, apprehensive the entire way about our impending reunion.

Mikhail met me at the bus stop. Shuffling in his slippers, and slightly stooped, he accompanied me back to the modest apartment he shared with his wife and his adult son. Their shelves were lined with music books. Alex, a few years older than I am, was a doctor who was planning to retrain. Of the three, Klara was the most talkative. In broken Hebrew, with a heavy Russian accent, she told me how disappointed she had been that my father had not helped the family to immigrate to the United States. They offered me some fruit.

In their cramped, floral, socialist, Slavic, Israeli, cultured home, I could picture our family tree. I had learned the links that joined me to Mikhail, Klara and Alex. Yet I could not help but wonder what I was doing in this apartment, among these people to whom I felt no kinship.

Rather than filling the void I had felt growing up, this long-anticipated reunion only exacerbated my sense of rootlessness. Relief came unexpectedly from the dictionary of six languages, which helped to answer some of my questions.

Be under no illusion. This is no tale of mystery or adventure. I did not follow a trail of evidence to discover that the editor of that volume was a distant forebear. No. The connection between this little book and my own family is obtuse and indirect. Yet it is also vast and profound.

My first trip to Uzbekistan was in 1993. I was a graduate student in cultural anthropology who had traveled to this part of the world to witness the end of one of the longest chapters in Jewish Diaspora history. Jews had lived in Central Asia (in the region that had long been part of the Bukharan Emirate) for two millennia. Now, with the dissolution of the Soviet Union, this deeply rooted community of some 50,000 was fleeing fast.

I traveled to the cities that have the largest and most long-standing Jewish populations. I learned about the homes, institutions and ways of life the people were leaving behind. Those whom I met were taken aback by my interest. Why was I — an Ashkenazi Jew — so keen on finding out about Bukharan Jews (the term they used to refer to themselves)? Many wondered if I might actually be Bukharan myself. Despite my fair skin and curly hair, some suggested that I must be related through some distant great-grandmother or grandfather.

As far as I have been able to surmise, I am not. The reason I was drawn to study Bukharan Jews was not family ties. Rather, it was the allure of their difference. Although they did eat matzo on Passover and knew some Hebrew, their cuisine, music, and ritual and cultural norms were totally unlike anything else Jewish I had ever encountered. Yet in the face of our differences, I sensed a hovering connectedness. Why, I wondered, was I so readily and warmly welcomed into their homes? And why did I have such a strong feeling of kinship among them, despite our vastly divergent historical experiences?

In the dictionary I began to find my answers. It came to print in the midst of Russian encroachment upon Central Asia. While large parts of the Bukharan Kingdom were coming under czarist rule, transportation and communication with the West improved, and mercantile activity in the region burgeoned. Jews took advantage of these new opportunities, and a well-traveled, nouveau riche merchant class emerged among them. They journeyed east for business, west for pleasure and to the Land of Israel on pilgrimage.

They were cosmopolitans who drew upon a broad and varied set of languages as they moved freely between cultures and empires. The dictionary suggests that, as they were not tethered to a particular home, they may not have had a primary language. The editor, Shlomo Baba Jon Pinkhasov, gives no preference for Russian, for example, over Persian, Turkish or Hebrew.

The implication is mind-boggling. With no base language — that is, no assumption that the user is translating from one particular language into another — there can be no alphabetical order. Instead, the book is organized according to categories such as “foods,” “weather” and “units of time.” Users must flip through sections and scan through rows and columns to locate whatever word it is that they wish to translate.

Navigating through this dizzying arrangement, I thought of other Jewish travelers who were at home in the dis-embedded Jewish world: 12th-century adventurer Benjamin of Tudela, who preserved a record of the Jewish communities he visited across the Mediterranean; 17th-century Glueckel of Hameln, whose memoirs describe the marriages of her children into families all over Europe; 19th-century David D’Beth Hillel, whose travelogue provides colorful depictions of the Jewish communities he visited in the Far East.

These individuals, along with so many other merchants, pilgrims, emissaries, adventurers and exiles, belong to a sprawling network of travelers. Their movement — together with their conversations, sharing of texts, exchange of ideas and circulation of material culture — cultivated connections across the globe, allowing far-flung Jewish communities to remain bound to one another.

But that is not all. At the very end of the dictionary, I found the Wayfarer’s Prayer. This brief section appears in only one language: Hebrew. We travelers — we Jews — in motion for generations, praying for security in a shared language, traversing through space, hoping to reach our destinations in safety; we move, settle, flee, come together, build homes, migrate, reconnect, uproot and create community again. Home need not be construed as a place with concrete geographic coordinates.

My father’s cousins were like strangers to me, and I still know next to nothing about the town where my grandfather was raised, or the history of his particular branch of my family tree. At one point, this void in my family past loomed large. Now it has shrunken in size to become almost meaningless.

After all, my family’s root system does not reach down, but stretches outward to encompass the globe. It connects me to the man who sold me the dictionary of six languages that now sits on my bookshelf. And it connects me to that man’s forebear, who bought the book a century ago to aid him on his travels through the Jewish world.

Separated by generations and continents, he and I belong to the same far-flung global Jewish community and share a single, expansive home.

Alanna E. Cooper is a cultural historian and author of “Bukharan Jews and the Dynamics of Global Judaism” (Indiana University Press).