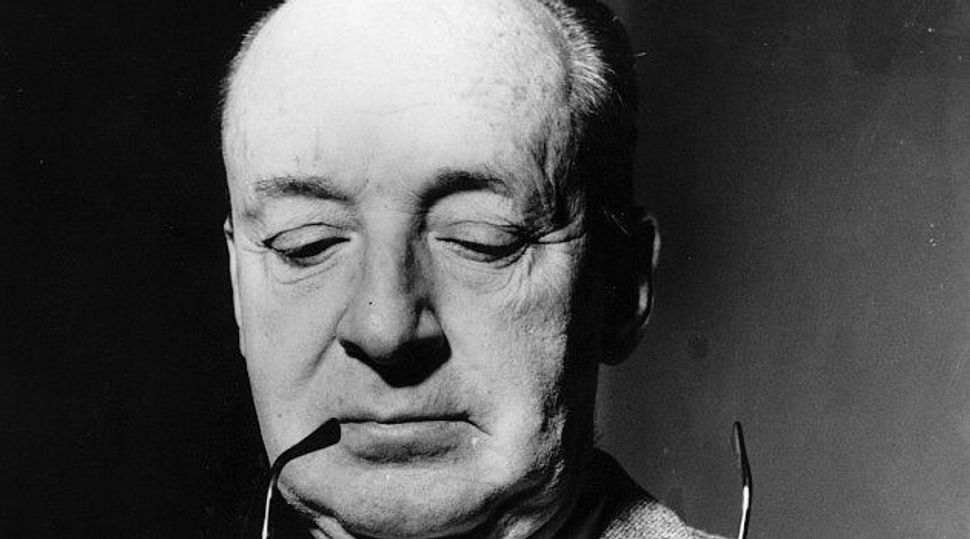 Defender of the Jewish People: Growing up in a privileged family, Vladimir Nabokov opposed anti-semitism on both moral and aesthetic grounds. Image by Getty Images

Vladimir Nabokov, the Russian American author of such novels as “Lolita,” “Pnin,” and “Pale Fire,” was a compassionate observer of modern Jewish history. This has been established in such works as Stacy Schiff’s “Véra (Mrs. Vladimir Nabokov),” a 1999 study of the writer’s much beloved Jewish wife; essays by critics Maxim Shrayer and Shalom Goldman, and a majestic two-volume biography of Nabokov written by Brian Boyd and published in 1991 by Princeton University Press.

Born in St. Petersburg, Russia, Nabokov came from a family of high-ranking civil servants who courageously opposed anti-Semitism. His grandfather Dmitri Nikolaevich Nabokov, minister of justice for Czar Alexander II, fought for Jewish rights, while his father, the lawyer and statesman Vladimir Dmitrievich Nabokov, decisively condemned two 1903 events — the publication of the notorious anti-Semitic tract “Protocols of the Elders of Zion” and the Kishinev pogrom, in which dozens of Jews were murdered and hundreds injured, in the then-capital of the Bessarabian province.

Growing up in a privileged and enlightened family, Nabokov would oppose anti-Semitism not just on moral grounds, but also for aesthetic reasons, as a sign of “philistinism in all its phases… crude, moronic, and dishonest,” as he explained in 1967 to the Cleveland-born American Jewish author Herbert Gold.

Nabokov’s notion of anti-Semitism as crass philistinism made it natural for the author, starting from his early years as a writer, to characterize Jews sympathetically and despise their haters. During studies at Cambridge University, followed by residence in Berlin, Paris, New York and Montreux, Nabokov stoutheartedly resisted noxious ideological appeals.

One such came from a Cambridge roommate who urged him to read “The Protocols of the Elders of Zion,” not realizing that Nabokov’s grandfather had rejected that forgery decades earlier.

Marrying Véra Slonim, from a St. Petersburg Jewish family, in 1925, only strengthened Nabokov’s convictions. In [“The Unreal Life of Sergey Nabokov,” a well-researched, artful 2011 novel by Paul Russell about Nabokov’s brother, a fictional, but credible, letter from Nabokov’s mother is quoted, written shortly after his wedding: “Really, she’s a most extraordinary woman, this Véra Slonim. Very intelligent, very literate, but then the Jews have always been so, haven’t they? That’s why they’re so envied, which is the real reason they’re so despised.”

“The Unreal Life of Sergey Nabokov” details how Nabokov’s brother was arrested in wartime Austria in 1943 for daring to utter anti-Nazi statements; he was deported to the Neuengamme concentration camp near Hamburg, where he died of dysentery and starvation. Following in the family tradition, in 1930s Berlin his brother Vladimir had, as Russell describes it, “made a point of entering each shop that had been marked with a yellow Star of David… he made himself visible, a Gentile publicly flaunting the boycott.”

Yet even after being forced to flee Europe on a ship chartered by the Hebrew Immigrant Aid Society, Nabokov did not over-idealize his adopted land. As related in Boyd’s biography, one professor at New York’s Columbia University complimented Nabokov’s elegant pronunciation of the Russian language, adding, “All one hears here are Yids.” In his travels across 1940s and ’50s America, Nabokov would argue energetically with restaurant or motel owners who catered to only “gentile clientele.”

Both “Pnin” and “The Gift,” an earlier novel, feature Russian gentile characters in love with Jewish women, echoing Nabokov’s own life story. Shrayer has aptly noted, “How strikingly and seamlessly biography dovetails with fiction when Nabokov thinks and writes about the Jews!”

“The Secret History of Vladimir Nabokov” would be more striking and seamless had it avoided overwrought prose, as when Pitzer cites some words from an early Nabokov novel, adding: “Many writers, myself included, would weep with gratitude to have written those four sentences.” More troubling, Pitzer advances without convincing proof the “possibility that Nabokov intended Humbert Humbert [the pedophile protagonist of “Lolita”] to be Jewish.” In “Lolita,” when characters are intended to be Jewish they are clearly described as such, since part of Nabokov’s mastery was his control of description, identification and metaphor.

To cite only one example, in “Lolita,” Humbert feels sympathy for a classmate of Lolita’s named Irving Flashman because he was “the only Jew among all those Gentiles.” Unlike Irving Flashman, nowhere in “Lolita” is Humbert identified as Jewish, which does not prevent Pitzer from suggesting portentously, “If Humbert is Jewish, he is a Wandering Jew for the post-Holocaust era.”

Fortunately, “The Secret History of Vladimir Nabokov” reminds us that, as Shrayer, Boyd, Goldman and others have previously argued, there are enough documented instances of Nabokov’s ardent devotion to the Jewish people — not least of which was his long-standing staunch support for the State of Israel — to show that no dubious theories are needed to provide further examples.