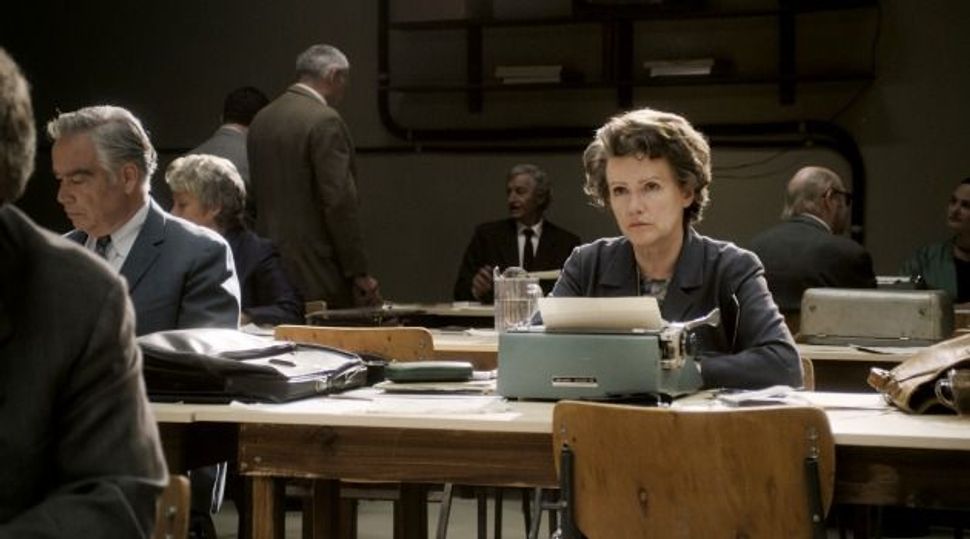 Biopics about philosophers are rare, and they favor activists over ivory-tower thinkers. The life of the mind, unless it directly shapes social action, is not easily captured in film.

Hence, Richard Attenborough’s film “Gandhi” exposed the Indian independence leader’s ideas on nonviolent struggle through his political activism, not through his writings. Likewise, Margarethe von Trotta’s cinematic portrayal of the Marxist dissident writer Rosa Luxemburg wasted little time on the latter’s considerable written output and instead explored Luxemburg’s role in the founding of organized social democracy in Poland, and later in the founding of the Communist Party in Germany, in opposition both to Russian Bolsheviks and German social democrats.

Given the challenge of translating philosophy into drama, it is understandable that Von Trotta’s latest film, about the German Jewish writer Hannah Arendt, has little to say about the political theorist’s extensive oeuvre on the nature of political action or her analysis of totalitarianism.

Instead, the film concentrates on a turbulent period in Arendt’s life, during which she came under severe attack for her reporting on Adolf Eichmann’s 1961 trial. First published as a series of essays in The New Yorker, the report was later expanded into a book under the title “Eichmann in Jerusalem: A Report on the Banality of Evil.”

The film is an engaging portrayal of a woman who did not back down in the face of massive hostility generated by her ideas. Arendt’s counterintuitive interpretation of the behavior and motivations of Holocaust perpetrators created a chasm among New York Jewish intellectuals, many of whom, like her, were German exiles.

“Hannah Arendt” is a logical continuation of von Trotta’s earlier films about women articulating perspectives in opposition to mainstream ideology; beyond “Rosa Luxemburg,” these films include “Vision,” about the medieval mystic, composer and writer Hildegard von Bingen, and “Rosenstrasse,” about a successful protest of gentile women against the incarceration of their Jewish husbands in Berlin in 1943.

The opening scene of “Hannah Arendt” depicts the capture of Nazi criminal Eichmann on a dark and lonely road in Buenos Aires. Much later in the film, Arendt finds herself similarly confronted by Mossad agents while on a meditative walk in the woods away from the tumult that her interpretation of the trial had caused.

This odd parallel suggests that Arendt, according to her critics, was culpable of empathizing with Nazi perpetrators while condemning victims’ actions. She shocked her contemporaries by claiming that the Holocaust was the deed not of raging anti-Semitic brutes devoid of basic civilization, but of unthinking bureaucrats who had deactivated their own moral reasoning in favor of absolute obedience to the Führer.

She considered Eichmann a midlevel career opportunist of second-rate intellect who organized the deportation and slaughter of European Jews because it was his job and he wanted to do it well.

The Holocaust, Arendt argued, was not a collective decision in which Eichmann participated; Hitler alone had ordered the complete extermination of Europe’s Jews, but the order’s implementation depended on the willing participation of vast numbers of German and other functionaries across Europe who were unwilling to think from any standpoint other than the law of the land. This interpretation led Arendt to question the legal concept of culpability.

A traditional understanding of guilt, she pointed out, was inadequate for convicting Eichmann of crimes against Jews or crimes against humanity. Eichmann had knowingly engineered the deportation and slaughter of hundreds of thousands, if not millions, but he had never personally murdered a single individual. Contrary to allegations by her critics, Arendt’s assessment of the shortcomings of existing legal theory was a far cry from exculpating Eichmann, whom she did consider evil and deserving of the death penalty.

But it explained her scorn for the prosecutor, who in her opinion misconstrued the nature of the crime and of Eichmann’s role in it.

Arendt’s view of genocide by unthinking managers did not deny the notion of agency; she certainly did not consider the Holocaust inevitable.

In her book, Arendt took great pains to report on the scope of resistance to and noncooperation with the deportations in various occupied countries, most notably Denmark, where, she wrote, even career Nazis “changed their minds” about “the extermination of a whole people as a matter of course” in the face of principled resistance.

But even if people had been willing to grant Arendt her idea that evil in the person of Eichmann seemed remarkably ordinary, Arendt’s insistence that Jewish community leaders had a choice in whether to cooperate with the Nazi regime and that they used the opportunity for self-aggrandizement seemed to turn notions of moral responsibility upside down. “

Without Jewish help in administrative and police work… there would have been either complete chaos or an impossibly severe drain on German manpower,” she wrote. This issue had already been addressed extensively by the historian Raul Hilberg (“The Destruction of the European Jews,” 1961), to whom Arendt’s report was heavily indebted.

But rather than seeing cooperation as a rational response that sought to lessen the impact of unfathomable evil, Arendt alleged that the Jewish community leaders “enjoyed their new power” derived from compiling lists, acquiring money from the victims to cover transportation costs, policing the deportations and transferring Jewish assets into Nazi hands.

To Arendt, the frequently posed question at the trial — Why had there not been any rebellion? — was misguided. Instead, what called for explanation was the scale of cooperation on the part of the victims’ leaders.

“The whole truth was that if the Jewish people had really been unorganized and leaderless, there would have been chaos and plenty of misery, but the total number of victims would hardly have been between 4 ½ and 6 million people.”

Ultimately, Arendt explained, this aspect of the Holocaust illustrated how completely the calculus of Nazism had replaced traditional moral conscience.

The main issues in the debates stirred up by Arendt’s report remain unresolved. The “Goldhagen controversy” during the 1990s juxtaposed an intentionalist interpretation of the Holocaust to the functionalist account of genocide engineered by unthinking bureaucrats.

Daniel J. Goldhagen’s 1996 book “Hitler’s Willing Executioners” claimed the Holocaust was possible because German anti-Semitism differed from its counterparts elsewhere in Europe insofar as it aimed at the complete elimination of Jews.

Whereas the latter argument is somewhat tautological, the functionalist thesis has no answer for why modernity engendered mass slaughter on an industrial scale only in Germany and why European societies under Nazi occupation varied widely in their response to the Nazis’ expulsion, deportation and murder of Jews.

The question of Jewish cooperation was taken up in a vastly more nuanced way than Arendt’s by the sociologist Zygmunt Bauman. Instead of accusing Jewish leaders of self-aggrandizement, Bauman, author of the 1989 book “Modernity and the Holocaust,” emphasized the paradoxical nature of bureaucratically organized genocide in which victims’ cooperation seemed like a perfectly rational, yet of course self-defeating, strategy.

As a period film, “Hannah Arendt” pays little homage to the 50 years of research that have been produced since Eichmann’s death. It paints a vivid picture of the German Jewish émigré community in New York, which continued to cultivate German language and customs and made Arendt’s American friends, notably Mary McCarthy, feel oddly out of place.

The film portrays the falling-out between Arendt and her erstwhile mentor, Zionist Kurt Blumenfeld, sensitively and without taking sides. It seems less even-handed in its rendering of Arendt’s interactions with her friend and New School colleague Hans Jonas. Arendt’s complex relationship with her former teacher, the philosopher and Nazi apologist Martin Heidegger, is treated only superficially and somewhat sappily.

The script, written jointly by Von Trotta and Pam Katz, a New York-based screenwriter, is smart and nimble, weaving together dialogue on the political and the personal in multiple languages. Original footage from the Eichmann trial is interspersed with the film’s account of Arendt in the court’s pressroom and in conversation with colleagues and friends in Jerusalem and New York.

Barbara Sukowa bears no physical resemblance whatsoever to Arendt, which has the effect of letting us focus on the character while leaving behind any sentimental fixation on looks. Janet McTeer gives a forceful performance as the novelist McCarthy, a close friend of Arendt’s who stood by her when most others abandoned her.

Anyone with a passing interest in 20th-century social theory will benefit from seeing this film, but no one should expect to receive from it an education in either philosophy or Holocaust history. It succeeds best as a sociology of intellectuals who were grappling with one of the fundamental cataclysms of the 20th century that they themselves had barely escaped — genocide on an industrial scale.

Beate Sissenich is a visiting scholar at New York University’s Center for European and Mediterranean Studies and author of “Building States Without Society” (Lexington Books, 2007).