All Jewish on the Western Front 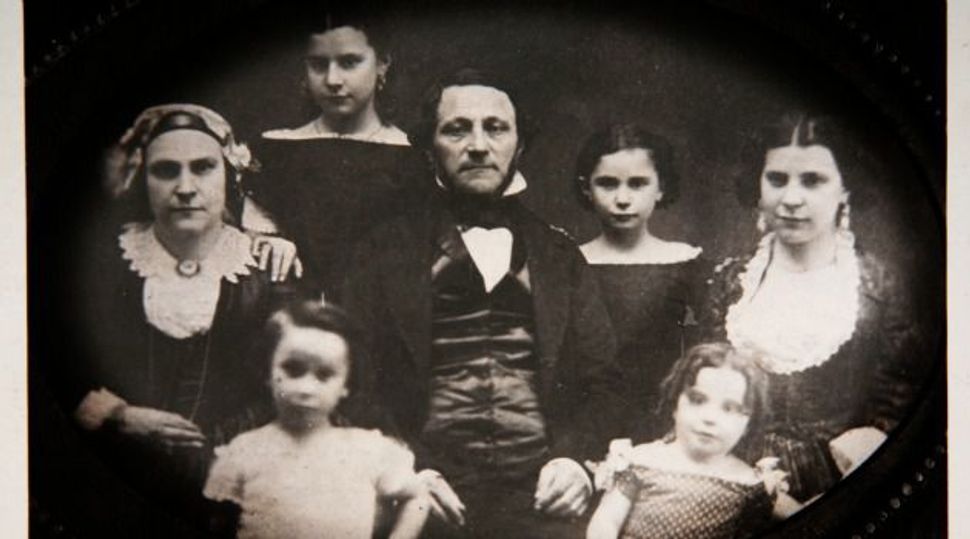 Jews of the Wild Frontier: The belongings of the successful Newmark family, seen here in 1854, are being displayed at the Autry National Museum?s exhibition ?Jews in the Los Angeles Mosaic.? Image by Courtesy of the Autry National Center

The Autry National Center is a gem. Tucked away in Los Angeles’s sprawling Griffith Park, the museum is packed with exhibits about the American West. There’s a stagecoach and a 19th-century fire engine, along with vintage guns and guitars. My favorite installation is the ornate saloon, all mahogany and brass, which provides a taste of life in the late 1800s, if not, alas, a taste of the period’s liquor.

Despite its charms, the Autry might not seem the most likely place for an exhibit about American Jews. (One thinks of Mel Brooks in quasi-Native American regalia, shouting “Loz im geyn” from a cliff top.) But the Autry takes pains to highlight the diversity of the American West, giving weight to the contributions of Latinos, blacks, Asians and especially Native Americans. In this context, its new exhibition, “Jews in the Los Angeles Mosaic,” seems fitting.

A secondary impetus for the exhibit might be the general ignorance about the Jewish presence in the most important city in the American West (sorry, San Francisco). While most American Jews know much about the immigrant communities of Eastern cities, we’re much hazier about the origins of the large, vibrant and diverse Jewish community of Los Angeles.

Right from the start, “Jews in the Los Angeles Mosaic” evinces an earnest desire to educate the visitor. The exhibit begins with a kind of introductory space, wherein a series of questions is projected onto one wall: “Why did they come here?” “How did they live as Jews and Angelenos?” On another wall, the text points out that “Boyle Heights and Hollywood are the best known ‘Jewish neighborhoods’ in the American West.”

The heart of the exhibit is arranged chronologically. The first section, “Remaking Los Angeles/Making Angelenos (1850–1900),” describes a frontier town.

The 1848 Gold Rush brought some 300,000 treasure hunters to California, including a number of Jewish merchants who set up shop in Southern California to sell supplies to them. A silver Mass chalice, a panning basket and a saddle suggest the mix of cultures, and documents like an 1873 Certificate of Deposit from the Jewish-owned Farmers & Merchants Bank suggest the Jewish presence.

The most evocative objects in this section belonged to various members of the Newmarks, a successful Jewish family that originated in Prussia. A gleaming dining service embodies all the glorious pretensions of the bourgeoisie of the 1800s, and the 1853 journal of teenage Myer Newmark records his 127-day schlep to San Francisco from New York City.

The next section, “Growing Pains (1900–1950),” traces the parallel growth of an American megalopolis and its Jewish community. Here we learn the remarkable fact that in the early 20th century, people used to come to Los Angeles for the air. Tuberculosis was common among East Coast garment workers, and Jewish organizations sent these poor souls west for treatment. The vast Cedars-Sinai Hospital itself has its origins in such a treatment center.

More important, the early part of the 20th century saw the advent of Hollywood. Considering the uneasiness of many Jews about the claim that Jews ran Hollywood, I was curious about how the curators would deal with the huge Jewish influence on the movie business.

There’s no uneasiness here: The wall text unambiguously proclaims that “Jews made Hollywood and Hollywood made Los Angeles.” The industry itself is evoked by a fun, if random, collection of objects, including an old-time movie camera and three Oscars awarded to the sublime writer-director Billy Wilder.

Two darker eras of Hollywood history are referenced with videos that recalled by disturbing videos. One is the fabricated newsreel made by Irving Thalberg and Louis B. Mayer of MGM against Upton Sinclair’s 1934 bid for governor of California. Sinclair, of course, was a leftie; the newsreels showed “interviews” with plain folk — in reality, actors — linking the candidate’s ideals to those of Soviet Russia.

The other video is made up of excerpts from 1947 House Un-American Activities Committee hearings: Ronald Reagan, Screen Actors Guild president, looks dapper but concerned about the supposed influence of communism on Hollywood; John Howard Lawson, screenwriter, looks stressed but defiant as he insists upon his constitutional rights.

The final section, “Possibility & Prosperity (1950–2000),” is somewhat random, but it does successfully evoke the enormous contribution that Jews have made to the economic and cultural development of Los Angeles. There’s a 1959 Teen-Age Fashion Model Barbie — the toy created by Jewish businesswoman Ruth Handler and manufactured in nearby Hawthorne — plus a reproduction of Julius Shulman’s “Case Study House #22,” and a 1975 Warhol portrait of Marcia Simon Weisman, a collector who helped found the Museum of Contemporary Art.

To my mind, the most affecting objects, though, pertain to the Halimis, a Jewish family that came from Iran. (Some 70,000 Jews left Iran around the time of the 1979 Revolution; most came to Los Angeles.) A video installation features a recent interview with Malouk Halimi, the family matriarch, who escaped to the United States via Turkey in 1981.

The history of American Jews is heavily weighted toward the East Coast, which understandably rankles some Jews who have roots in the West. “Jews in the Los Angeles Mosaic” is a nice corrective. And it’s a good excuse to spend a few hours at the Autry.

Gordon Haber is the author of the best-selling Kindle Single “False Economies: A Novella,” now available on Amazon.

All Jewish on the Western Front