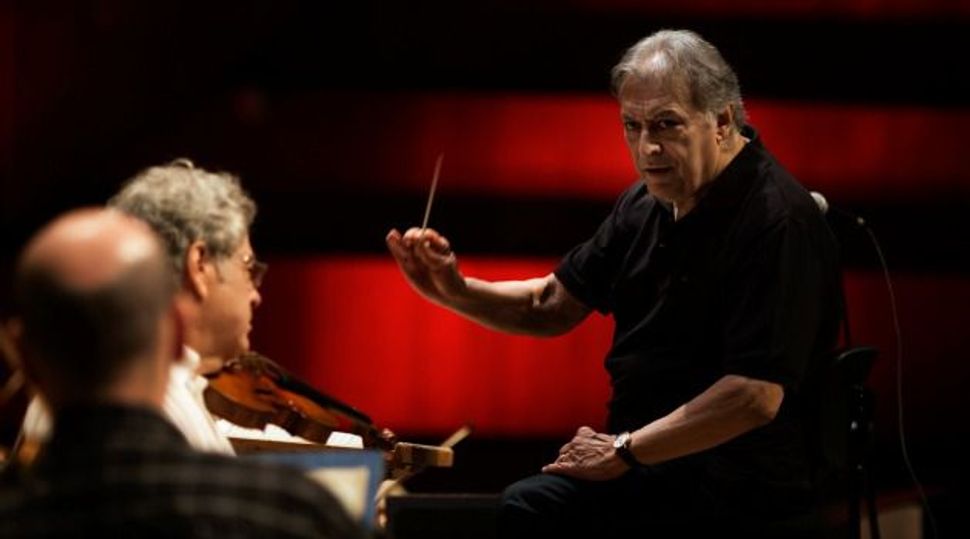 Stunning Debut: Zubin Mehta and the Israel Philharmonic has a new home in Tel Aviv. Words don?t do justice to the wonder of its opening night performance. Image by getty images

It was a who’s who of Tel Aviv and New York Jewish culture vultures, politicians, philanthropists and, yes, music lovers from around the world. Thirteen years in the making, more than 77 years since its founding, the Israel Philharmonic Orchestra was inaugurating its new home at Heichal Hatarbut. Thanks to the city of Tel Aviv and the generosity of Charles Bronfman, after whom the new hall has been named, we can now hear the IPO for what it is — a world-class symphony orchestra in a world-class hall, an experience I am told one used to be able to have only outside Israel, where the acoustics were actually befitting the quality of the performers.

I was lucky enough to be there. In Israel for the wedding of the daughter of a dear friend, I learned from a friend on the board of the American Friends of the Israel Philharmonic Orchestra that there was a gala performance in the new hall the night before the wedding. Strangely enough, I had never heard the IPO perform. I am always in Israel in the summer, when the orchestra is not in Israel; even the rare times I have been in the country when the orchestra is playing, it’s next to impossible to get tickets.

And when the IPO comes to New York, I have never managed to get there, despite having grown up in a music-obsessed family where my father’s idea of nirvana was listening to practically any music well played at any time of the day or night. One of the most poignant and painful memories I carry of the last months of my father’s life was watching him in bed, in and out of consciousness, conducting the orchestra of his mind playing the music of his dreams.

But back to the IPO. I invited my oldest friend to join me at the gala. Dahlia lives in Tel Aviv and is a pianist, and I thought she’d enjoy it. We got a little farputst (though in Israel, people come to galas both in long dresses and in jeans) and made our way to the beautiful open plaza in front of the hall, where children were playing and people were strolling. In front of the hall, families were picketing the government, presumably for spending too much money on concert halls and not enough on education. It was a little disorienting to feel so excited to be entering this great hall while considering the possibility that these families might have a point.

We took our seats. The mayor of Tel Aviv spoke the requisite words of gratitude. And then — and then the great maestro, Zubin Mehta, possibly the most beloved Indian in all of Israel, came out onstage. The audience roared. And suddenly we were all on our feet and the orchestra began playing “Hatikvah,” Israel’s national anthem.

Having never been to one of these galas, I wasn’t sure what to do — sing or listen? But suddenly Mehta turned around and began conducting us, the audience, and the room filled with the sound of all of us singing together, and my eyes filled with tears. Someone cynically told me the next day that this is Mehta’s shtick; I found it stirring beyond words.

The concert opened with “Festival Prelude” by the Israeli composer Noam Sheriff, who had been commissioned to write a piece for the original opening of the hall, in 1957. It was exuberant and nostalgic, and Sheriff was brought onstage at the conclusion of the piece. Then came the moment everyone was there to hear. Slowly, Itzhak Perlman made his way to the chair near the conductor, putting one crutch in front of the other, using all the power of his upper body to will his legs to follow him. The Beethoven violin concerto was simply magnificent, and when Perlman was finished, the audiences could not stop applauding this remarkable, gifted musician.

I looked at my program to see what would follow the intermission. I groaned inside. Mahler. Not only Mahler, but 70 minutes of Mahler. The truth is that for most of my adult life, my father and I had argued about Mahler: He loved him, and I didn’t. He would play his symphonies and try to get me to understand; I never did. But I wasn’t about to leave this evening until its end, and that meant staying to hear Mahler. So I stayed. Despite the fact that it was after 10:30 p.m. (and my jet-lagged bedtime) when the orchestra began the play, I was mesmerized from the first notes. Much of the time I was on the edge of my seat, so thoroughly engrossed in the music that I scarcely noticed the time. Or that I hadn’t eaten dinner. Or anything else, for that matter.

What made it so special? Was it that the acoustics are so good that I was finally able to hear Mahler’s true genius, played by a magnificent orchestra? Was I finally old enough to appreciate the complexity and depth of the music? And did I mention that it happened to be my father’s yahrtzeit? I have no doubt whatsoever that his spirit opened my ears and hovered over the concert hall, and that the orchestra played for my father alone, without even realizing it. And he gave them an eternal standing ovation. May his memory be for a blessing.

Rabbi Joy Levitt is the executive director at the JCC in Manhattan and founder of the Jewish Journey Project.