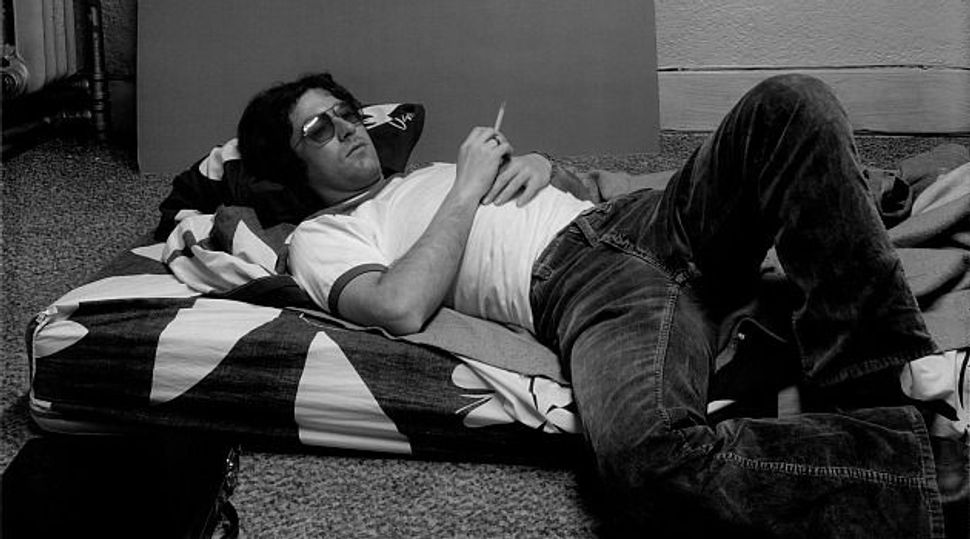 Falling Man: Jack Goldstein?s 1978 film ?The Jump? depicts a man diving into darkness. The film proves an apt metaphor for the career of the late artist whose work is now on view at The Jewish Museum in New York. Image by james welling

This is probably the ideal way to view the new Jack Goldstein exhibit at The Jewish Museum in New York — on a nearly silent morning when the only sounds to be heard are those of a whirring projector and the eerie, ethereal soundtracks the artist himself created. The gallery halls are empty save for one security guard and, of course, the art.

Today, the museum is hosting a press opening for “Jack Goldstein x 10,000,” which was first shown at the Orange County Museum of Art. But at this particular, wondrous moment, everyone else is upstairs enjoying the complimentary bagel breakfast and awaiting opening remarks from the exhibit’s curator, Philipp Kaiser, and the Jewish Museum’s director, Claudia Gould.

For this writer, who grew up fantasizing about being Jamie or Claudia Kincaid camping out at the Metropolitan Museum of Art in E.L. Konigsburg’s “From the Mixed-Up Files of Mrs. Basil E. Frankweiler, in which two kids have the museum to themselves overnight, these conditions would be ideal for seeing any exhibit.

But the solitude is particularly appropriate for viewing the work of Goldstein, an artist who seemed to spend a good portion of his entire career attempting to disappear, never signing his artwork, finally performing the ultimate disappearing act in 2003 at the age of 57 when he committed suicide by hanging himself at his home in San Bernardino, Calif. He had reportedly struggled with drugs and depression.

Near the start of the exhibit, a neon-orange Lite-Brite diver in the artist’s 1978 short film “The Jump” appears to provide an apt metaphor for Goldstein’s career — an anonymous figure shimmering and twirling for a few brief moments before disappearing into blackness.

The name of the exhibit itself, “Jack Goldstein x 10,000,” focuses one’s attention on the mutability and ultimate insignificance of identity — no, there’s not just one Jack Goldstein; he was one of thousands.

Part of the so-called Pictures Generation, a group that comprised such artists as Robert Longo, David Salle and Cindy Sherman, Goldstein was born in Montreal to a Jewish family who later moved to Los Angeles.

Goldstein himself was educated at the California Institute of Arts in the early 1970s and his work encompassed an astonishing variety of media. He moved to New York in 1974 before returning to California in the 1980s. The work on display at The Jewish Museum ranges from painting to minimalist sculpture to short film to installations to sound design, and ultimately, text.

You wander slowly, pensively, from one gallery to the next, experiencing the same sort of chilling, existential bummer you might get from, say, listening to early Pink Floyd or Major Tom-era David Bowie or watching “2001: A Space Odyssey.” It’s hard to say what a viewer’s sensation might be in a half-hour or so, when the upstairs crowd swills the last of the orange juice and coffee and makes its way down to the exhibition, overwhelming the silence with their footsteps and conversation.

But at this point in time, the effect is profoundly alienating. You step inside “Burning Window,” a 1977 Goldstein installation where a fiery orangeness seems to rage silently outside a four-paneled window. Is it your house that’s on fire? Or one nearby? Maybe both, maybe neither, or maybe the point is that it doesn’t matter anyway — you’ve already surrendered your identity.

In another gallery, there is a wall of nine monochromatic vinyl records whose sounds play as you contemplate their titles — “A German Shepherd” on red; “The Tornado” on purple; “Three Felled Trees” on green. You hear the drama around you, and yet at the same time you are made aware of your motionlessness and that of the records before you. Short, minimalist films are screened in a separate gallery.

They pare powerful and iconic images down to their barest essences. A Metro-Goldwyn-Mayer film is reduced to one repetitive roar of a lion; color is seen glinting off the blade of a knife before the implement returns to silver and then to black. In Goldstein’s world, everything ultimately seems to fade to black.

Some of the most arresting work appears in a series of untitled paintings that Goldstein executed in the early 1980s when he turned natural and man-made conflagrations — bombings, volcanic eruptions, lightning storms — into arcs and crisscrossed patterns of light. The images are striking both for their violent beauty and the silence that seems to encompass them.

Toward the end of the exhibit, you stop to gaze at a work from the twilight of Goldstein’s career, the artist’s last completed film, “Underwater Sea Fantasy.” The eruption of volcanoes gives way to silent images of oceanic life and then finally to a lunar eclipse. You watch the moon fading towards blackness, you stand there and watch it fading, fading…

But now you notice you’re not alone anymore. Either the breakfast on the floor above has ended or someone else has decided to avoid the crowd and see the exhibit before anyone else. The woman in the gallery next to you watching “Underwater Sea Fantasy” is taking furious notes on a piece of paper.

She’s right. And yet, now that the silence has been disrupted, the beautiful moment is gone. Forever.