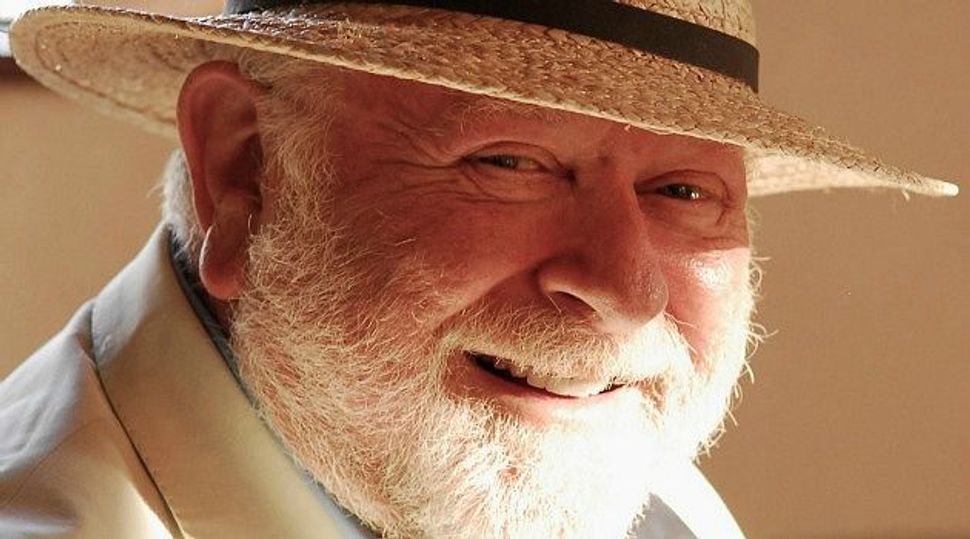 An Outsider on the Inside: Jonathan Lynn?s play, ?Yes Prime Minister,? adapted from his BBC comedy series, is currently running in Los Angeles at the Geffen Playhouse. Image by Courtesy of Jonathan Lynn

‘Comedy is often created by outsiders,” Jonathan Lynn said, speaking of growing up in the only Jewish family in the English spa town of Bath in the 1940s. The British-born director of such comic screen romps as “My Cousin Vinny” and “The Whole Nine Yards,” as well as the popular BBC comedy series “Yes, Prime Minister” and that show’s long-running West End stage version, was sitting in Jerry’s Famous Deli, located in Los Angeles’s Westwood Village — a long way from Bath — but not necessarily for its pastrami (he prefers the Carnegie Deli, in New York).

The deli is near LA’s Gil Cates Theater at the Geffen Playhouse, where rehearsals were under way for the American stage premiere of “Yes, Prime Minister.” Directed by Lynn and co-written by Antony Jay, the comedy stars Dakin Matthews, Jefferson Mays, and Michael McKean.

Lynn is also the author of the book “Comedy Rules,” which is constructed around 150 “rules” of comedy that add up to a memoir of sorts. The book delivers lessons Lynn learned over the years, from his days at Cambridge to his early stage acting career in “Fiddler on the Roof,” “Bar Mitzvah Boy” and “The Knowledge,” to writing and directing on the West End and for the BBC, to his Hollywood move in the early 1980s directing his first studio film, “Clue.”

Outside the book’s autobiographical scope is the fact that Lynn’s uncle was Abba Eban, Israel’s ambassador to the United States and the United Nations during the 1950s, and that his grandmother was secretary to Chaim Weizmann — founder of Israel and its first president — and tasked with translating the Balfour Declaration into multiple languages. An incident related to Lynn by Eban formed the plot of an episode of “Yes, Prime Minister” titled “A Victory for Democracy,” in which the British prime minister rejects his Arab-centric Foreign Department minister’s advice on a foreign policy decision, taking the Israeli ambassador’s advice instead.

“It actually happened,” said Lynn, who was close to Eban, an outspoken critic late in life of Israel’s domestic policies. “I was shocked to see him heckled and shouted down for his views on the occupation.”

Lynn said that his father was a Scottish-born doctor whose own father had left by boat from Lithuania and disembarked in Glasgow “under the impression it was New York.” Growing up in a household that was Jewish but secular, Lynn’s mother would light the Sabbath candles “occasionally,” and on holidays the family attended the nearest synagogue, 12 miles away, in Bristol. “My father would drive,” Lynn recalled, “but he would park at a discreet distance and we’d walk the rest of the way.”

A bar mitzvah was the last formal experience of Lynn’s Jewish education. Though he played drums in jazz bands and sought out the oddball crowd in school, he did not escape the fact of his Jewishness, nor the casual anti-Semitism common to British life in that era. “It wasn’t vicious,” Lynn said, shrugging. “They just didn’t know any better.”

At Cambridge, he said, being Jewish was not an issue: “It’s an educated, literate, tolerant place.” There he joined the 120-year old dramatic society the Footlights Club, along with future Monty Python-ites Eric Idle, Graham Chapman and John Cleese. His stage-acting experience led to writing and directing. He eventually teamed up with writer Jay to create “Yes, Minister,” the BBC series that ran from 1980 to 1984, and its sequel, “Yes, Prime Minister,” which ran from 1986 to 1988. Lynn revived the series for a new season earlier this year. But if you call it topical satire, you’ll get an argument from its co-creator, who sees his work following more in the literary humor tradition of Evelyn Waugh and Kingsley Amis.

“Satire is a mode of wit or humor designed to change society,” Lynn said, adding, deadpan, “Tony and I write comedy.” The effect was an evergreen topicality, as the episodes of “Yes, Prime Minister” were written a year in advance of airing. By not aiming their barbs at today’s headlines, Lynn and his co-writer also avoided certain comedic disasters. “We avoided IRA jokes, for example,” Lynn said. “You never knew if a bomb might go off on the night the show aired.”

“Topicality is an illusion,” in Lynn’s view, “and the issues are the same as always.” Except for a few lines, “Yes, Prime Minister” has not been updated or adapted for American audiences. “I hope that they will laugh a lot,” Lynn said, “and they will recognize the truth about government — not just the British, but American government, as well.”