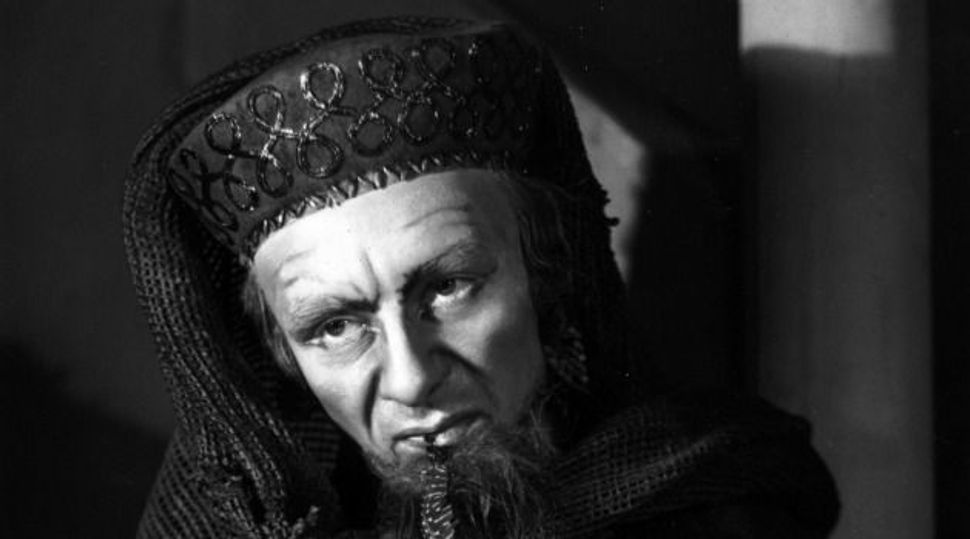 Quality of Mercilessness: In his study of anti-semitism, David Nirenberg considers Shakespeare?s ?Merchant of Venice.? The titular character, as played by John Gielgud, is shown here. Image by Getty Images

Anti-Semitism’s eternal recurrence is so puzzling that it can invite mystification. Even the secularist Yiddish poet Yitzchak Katznelson, grappling with the Nazi extermination of European Jewry, resorted to religious myth. In his “Song of the Murdered Jewish People” (completed shortly before he was deported to Auschwitz, where he later died), he writes of a “tale that began with Amalek and concluded with the far crueler Germans.” Similarly, Lamed Shapiro, a great Yiddish chronicler of pogroms, once wrote of Jewish victims’ cries “as eternal as the Eternal God.” Shapiro and Katznelson may have needed religious language just to register their horror, but they were responding to a real enigma: Why anti-Semitism? The sheer variety — of people who have hated Jews, of the places and times in which they have done so, and of the implausible reasons they have given for their dislike — defies explanation.

In his magisterial “Anti-Judaism: The Western Tradition,” David Nirenberg considers a bewildering range of cases, starting with ancient Egypt and running through 20th-century Europe, encompassing literary criticism of “The Merchant of Venice,” medieval political theory, the talmudic allusions in the Quran and Nazi mathematics. This is heady stuff. Nirenberg has written an old-fashioned intellectual history, and though he is sensitive to historical context, the book’s core is his careful reading of the works of such thinkers as Augustine, Voltaire, Martin Luther and Marx.

Through these readings, Nirenberg develops his central argument, which is that anti-Judaism frequently reflected not the presence and activities of real, living Jews, but the importance of “Judaism” as a concept in a broader structure of ideas. Using Marx’s pivotal essay, “On the Jewish Question,” as a framing device, Nirenberg argues that Christian, Muslim and secular Western societies produce the idea of “Judaism,” in Marx’s phrase, “out of their own entrails” — that is, to express the unpleasant corollaries of their cultural ideals, satisfy the needs of conceptual systems and think through important abstract binaries.

If this theory sounds hifalutin, one small example will help to make it more concrete: take Luther. In early writings, the great German Reformation leader expressed sympathy toward Jews, writing famously, “If I had been a Jew and had seen such dolts and blockheads govern and teach the Christian faith, I would sooner have become a hog than a Christian.” Luther apparently believed that a better church could convert the Jews. According to the traditional account, once he saw for himself the Jews’ recalcitrance (and their attempts to convert German Christians), he turned against them; his 1543 “On the Jews and Their Lies” calls Jews a “base, whoring people.” This interpretation sees Luther’s shifting attitudes as stemming from his observations of and experiences with real Jews.

Nirenberg places Luther’s attitudes in the context of his broader Protestant theology and biblical interpretation. Luther, like other reformers, stressed the principle of sola scriptura — that is, that salvation requires just reading of the Bible, not the exercise of external human reason. Sola scriptura, Nirenberg claims, created Jews “out of its entrails.” Because Luther rejected traditional Catholic readings of biblical passages as allegory, he used the idea of forced, external rabbinic interpretation rhetorically, to paint his opponents as poor, “Jewish” readers. In this context, his suggestion that Christians have mistreated Jews, who might convert if the church were better, does not reflect sympathy for real Jews. Rather, Luther was criticizing Catholicism, which — he suggested — was hardly better than full-fledged “Judaism.”

In support of his argument, Nirenberg not only reads Luther brilliantly, but also cites evidence that in Luther’s time, German Jews were quite rare. Thus, it seems unlikely that Luther’s late-life polemics against Jewish attempts to convert Christians responded to actual Jewish activity. Rather, Nirenberg suggests, these tracts reflect Luther’s war with increasingly radical Protestant sects, who took sola scriptura and anti-hierarchal reform further than he did. Even as he labeled Catholic opponents “Jewish” for insisting on the importance of external reason, Luther criticized the radicals for their “Jewish” over-literalism. Just like Jews, Luther argued, the radical failed to transcend the letter of the law for Christ, the spirit.

“Judaism,” in other words, did not refer to real Jews. Rather, it stood for undesirable religious possibilities, deviant methods of reading scripture and heretical philosophies.

Though Nirenberg is arguably at his best on Luther, “Anti-Judaism” contains many gems. The analysis of Luther resonates with earlier themes in the book; for example, the contortions through which church fathers used Judaism to attack each other and delimit the boundaries of Christianity. The same Christian polarities — truth and error, love and justice — recur not only in medieval European politics (and, surprisingly, in the Quran), but also in Enlightenment philosophy. Both French revolutionary philosophies and the 19th-century German idealists employed, perhaps unthinkingly, inherited patterns of thought. Whether they were attacking religion or Kant, they always used Judaism to frame their quarrel.

Though “Anti-Judaism” weaves together millennia of history into one story, Nirenberg resists the urge to mystify, instead consistently qualifying, limiting and clarifying his argument. He cannot, he admits, explain the causes of any particular outbreak of anti-Semitism, just habits of thought that make these outbreaks possible. Disappointingly, though his epilogue alludes to widespread, often hysterical anti-Zionism in the Muslim world, he does not tackle the present directly. This is understandable, and not just because the present is a political quagmire. The basic premise of “Anti-Judaism,” that anti-Judaism responds less to Jews than to (useful) gentile concepts of “Judaism,” largely describes a world of Jewish weakness. Jews, like many other oppressed groups, barely influenced how they were represented. Zionism promised to return — and did in fact return — Jews to the historical stage as actors.

Indeed, today, in both Israel and America, Jews not only wield great power; we also, increasingly, are responsible for our society’s representations (both good and bad) of Jews and Judaism. Americans debate Israel today, it seems, through the frames of Alan Dershowitz and Judith Butler; we learn about the relation between Jesus and the Hebrew Bible from Daniel Boyarin and Shmuley Boteach. Surely Shapiro and Katznelson resorted to the supernatural in part because they were powerless. Just as myths explain the inexplicable, they tame the uncontrollable. After Nirenberg’s levelheaded, careful examination of anti-Jewish stigma over a history of Jewish weakness, we now need the more difficult work — an analysis of the same forces and ideas in an age of Jewish power.

Raphael Magarik is finishing a Dorot Fellowship in Israel and starting a doctorate in English at Berkeley.