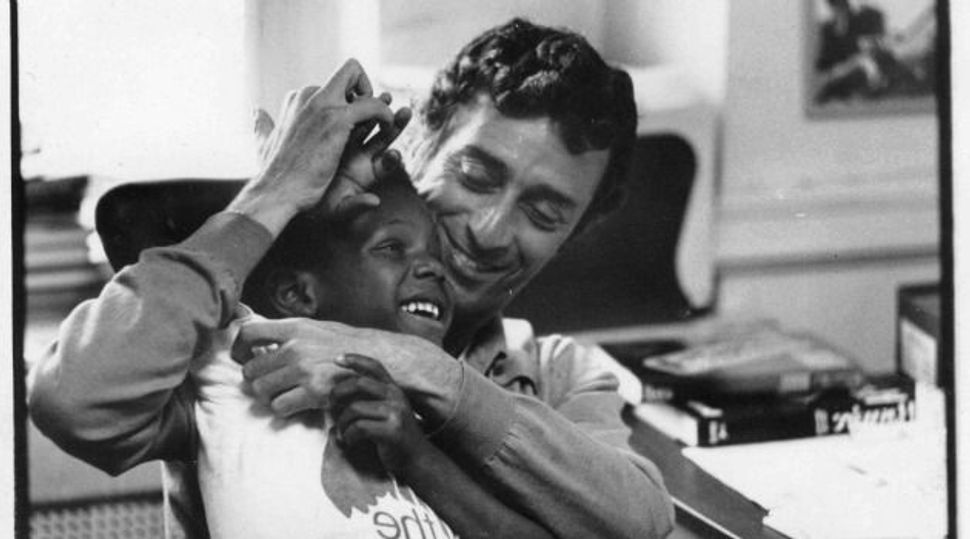 Fortunate Son: David Rothenberg (pictured here in an archival photo) is the founder of a society that helps ex-cons and also runs a discussion group for at-risk teenagers. He comes from a long line of Jewish artists and activists Image by Grace Harrington

David Rothenberg has little doubt that old people are invisible. But invisibility is not all bad, he explained cheerfully in the lobby of his building, in New York City’s Greenwich Village: “See how I’m dressed? It’s great. No one notices,” he said.

Yes, his baggy knee-length shorts and loose-fitting, nondescript shirt are not high fashion, and it’s probably true that nobody cares. Still, at age 80 he needn’t worry about invisibility. And just for the record, there’s nothing geriatric about him.

Best known as the host of a weekly radio program on WBAI for almost 40 years — and also as the founder of The Fortune Society, a not-for-profit organization that helps ex-cons gain re-entry into society — Rothenberg had just returned from his morning swim. He was busy handing out fliers to his neighbors, announcing a food drive he has been helping to organize.

“On weekends I see people lined up for food at the church,” he noted. “They’re working and have food stamps, but the food stamps don’t cover it. They have to make a choice between medication and food, between rent and food.”

The food drive is a footnote to Rothenberg’s activities. Three days a week, he runs a discussion group for high-risk youngsters in a program called Alternative to Incarceration, at Fortune Society’s headquarters in the Queens neighborhood Long Island City. And on Thursday nights he co-moderates a conversation with residents at The Castle, a Fortune Society halfway house for ex-offenders.

Rothenberg tours prisons, schools and community centers with a play he helped forge, “The Castle” — focusing on the lives of four former prisoners who portray themselves. A documentary, “Released,” based on the play, recently premiered at the Quad Cinema, in New York.

Rothenberg has worked as a theatrical press agent (representing more than 200 Broadway and off-Broadway productions), theater producer and city council candidate. He also wrote a memoir, “Fortune in My Eyes.”

Back upstairs in his sleek but very comfortable 16th-floor apartment, filled with theater books and memorabilia, Rothenberg proudly pointed to a leather club chair that belonged to his second cousin, baseball union leader Marvin Miller, who died last November at age 95.

“When Hank Aaron got into the Hall of Fame, he thanked his mother, father, God and Marvin Miller,” Rothenberg remarked.

But Miller isn’t the only noteworthy member of Rothenberg’s mishpokhe: another Rothenberg cousin routinely helps ex-cons by employing them in his restaurant on Manhattan’s Upper East Side, and Rothenberg’s aging aunt and uncle, married 62 years, still open their homes to the formerly incarcerated who are now homeless.

“My great-great-aunt was Lillian Wald, who started the Henry Street Settlement,” Rothenberg commented. “My parents were not political or social activists, but their instincts and values were good. I remember people visiting the house when I was a kid, and someone said ‘nigger,’ and my mother said, ‘That word is not acceptable in this house.’”

As a youngster, Rothenberg identified with Jackie Robinson. “Maybe in the depths of my soul, I knew I was gay and an outsider and understood what ostracism felt like,” he said

One of the few Jewish kids in Ridgefield, N.J., Rothenberg was not unfamiliar with anti-Semitism. When his favorite uncle, Donny, was killed during World War II, a kid in class said, “One less Jew.”

“I went home crying,” Rothenberg remembered. “Donny was the closest thing to an older brother that I ever had. I was 9 and he was 19, and he’d take me to Teaneck to see the baseball games. I’d sit on his shoulders.”

Rothenberg’s family was made up of Reform Jews who belonged to a synagogue and celebrated all the major Jewish holidays. They also celebrated Christmas. Indeed, one of his grandmothers became a Christian Scientist. “In the ’20s many Jewish women converted,” Rothenberg said. “When I got sick I didn’t know whether to read Mary Baker Eddy or to have chicken soup.”

Rothenberg attended Jewish Sunday school, and to this day he loves the holidays, rituals and family gatherings, though he always challenged the mysticism. “I’m agnostic,” he said. Still, Rothenberg defines himself as a Jew, specifically “the part of Jewish tradition that is concerned with social issues, that is concerned that children are going to bed hungry.”

Jewish humor also played a major role in shaping Rothenberg’s worldview. From the outset he was an admirer of Smith & Dale, the Ritz Brothers and Milton Berle. “When ‘Exodus’ came out, Milton Berle said women were ‘so thrilled by it, they wanted their old noses back.’ To make jokes about Exodus, that’s what Jews do.”

He admits he was star struck, and that he still enjoys dishing about the artists he encountered during his life. No one, he says, was more colorful than Charles Laughton or Elsa Lanchester, both of whom liked to shock. Laughton made a pass at him, clutching Rothenberg’s thigh under the table, and shortly thereafter Lancaster flashed him, joyously lifting her skirts to reveal her wholly nude private parts.

The turning point for Rothenberg was producing John Herbert’s play “Fortune and Men’s Eyes,” a brutally frank account of prison life. The show and especially its talk-back sessions brought many former prisoners into the theater, where Rothenberg encountered them for the first time. In short order, his Times Square office became the makeshift headquarters for ex-cons in need of a host of services that were unavailable anywhere else. Rothenberg forged the Fortune Society to help fill the chasm.

“I knew nothing about crime or prisoners,” he said. “I met them through the play I produced. It was the ’60s, and everyone was nice to everyone, and I found that people couldn’t get jobs, licenses or housing because they were prisoners, and that just seemed unfair.”

Rothenberg became such a well-known advocate for prisoners that he was called in to negotiate during the Attica riots. “I was the only negotiator introduced with theater credits,” he said.

On a cold Thursday night in spring, Rothenberg was greeting current residents and successful alumni who routinely visit The Castle, the Gothic structure on 140th Street on Riverside Drive that at one time housed a yeshiva. Pleasantries were exchanged, and bear hugs administered.

The Castle is the only operation of its kind in the country: clean, cheerful and largely run by former convicts who serve as administrators and counselors. An array of services is provided, including education, job training and therapy.

“Two-thirds of former prisoners return to prison,” Rothenberg said. “Among those who come through The Castle, it’s 10%. We have 62 beds, and hundreds wanting to get in. We need thousands of Castles.”

Chairs scraped across the floor as the 40-plus participants seated themselves around a long conference table for their weekly meeting. The majority are African-American men, though a few Caucasians, Latinos and women were scattered throughout. New members ritualistically introduce themselves.

“I recently came out of prison, and I’m here because I want a better life,” one man proclaimed.

“Welcome home!” It’s a collective greeting, followed by a round of applause.

Rothenberg insists he never felt like an outsider with his Fortune Society friends and that he has encountered virtually no anti-Semitism. He is devoid of self-consciousness as a Jew in this setting. Case in point: He felt no personal shame, need to disassociate and or fear of anti-Semitic backlash when Joel Steinberg, an attorney who was convicted of manslaughter in the 1987 death of a 6-year-old girl whom he had adopted illegally, took up residence at The Castle.

“He had to live somewhere, and no one else would take him,” Rothenberg noted. “People were hanging up signs in their windows that said, ‘We don’t want baby-killers here,’ and it was a media circus, with TV crews outside the door and helicopters flying overhead. That’s what I was thinking about — the attention he received because it was a murder that had taken place south of 96th Street. His crime was monstrous, and I could not find anything about him that I liked. But I never thought of him as a Jew.”

Almost every encounter is a learning curve, Rothenberg said. He was not prepared for the emotional, physical and, in some instances, sexual abuse that most of the residents had endured over a lifetime. A major challenge is that many of these people have given up on themselves.

“How do you overcome a lifetime of being demonized and ridiculed?” Rothenberg asked. “One guy told me his father called him ‘s–t for brains.’ He thought that was his name. Another kid was sodomized by his stepfather from the time he was 4 until he was 13. I can’t imagine a childhood with anything more abusive than ‘Finish your peas.’”

Looking back, Rothenberg says his major regret is not having come of age in a more open-minded era. As a young gay man, he could not have been a parent. “I would have loved to have adopted a son and daughter,” he said.

Asked what he’d like as his epitaph, Rothenberg quipped: “I’m not going to have one. I’ll be cremated, and I want my ashes scattered from the roof of The Castle. I’d like someone to say ‘Enough is enough.’ I’ve had a fortunate life, though the world is not pretty and there’s a lot of sadness.

Simi Horwitz frequently covers the cultural scene for the Forward and recently won a New York Press Club Award for Journalism in entertainment news for her 2012 Backstage story on buskers.