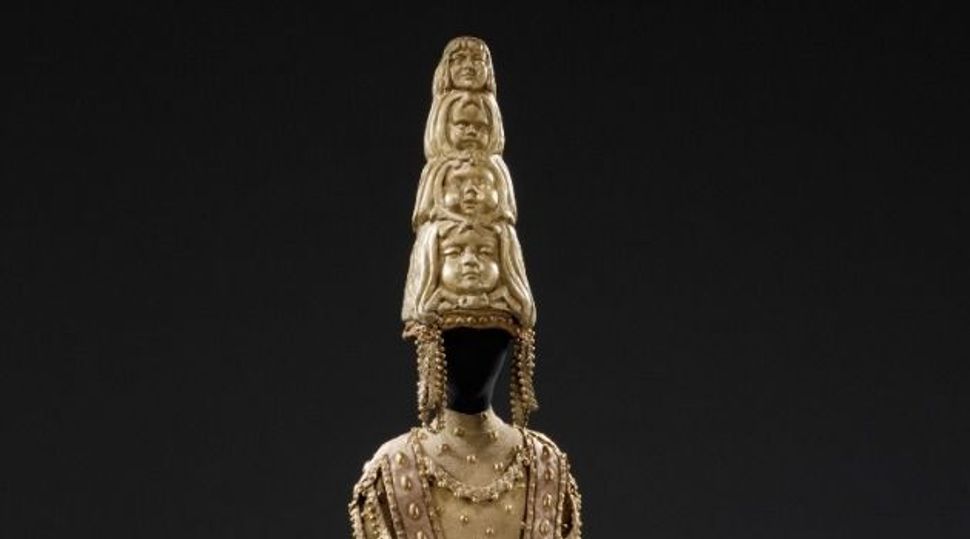 Fit For a Tsar: Léon Bakst designed this costume for the 1912 ballet ?The Blue God.? It is on display at the National Gallery in the exhibit ?Diaghilev and the Ballets Russes, 1909?1929: When Art Danced With Music.? Image by Victoria and Albert Museum

‘Though raised in a religious family, I threw off the old faith when I started to live my own life, as did so many men of my age,” the 21-year-old Sergei Diaghilev wrote to Leo Tolstoy in 1893. “I had to convince myself that many things I had previously accepted were merely fairy tales, which couldn’t be subordinated to even the simplest logic.”

The Ballets Russes’s founder may have rejected his Russian Orthodox faith, but Diaghilev, the subject of a major exhibition (through September 2) at the National Gallery of Art, in Washington, D.C., and his colleagues could address religious topics more freely in Europe than they could have in Russia.

The choreographers and dancers of the Ballets Russes, which was founded in Paris in 1909, performed the biblical Joseph; the prodigal son, Jesus, and the notorious Salome. “In general, religious content was forbidden on the secular stage in Russia,” said Sjeng Scheijen, a lecturer at Leiden University and the author of “Diaghilev: A Life.” “It was interesting for Russian artists to pursue their ideas when working in Europe. This partly explains the great amount of religiously themed productions within the Russian ballet.”

The two decades leading up to the 1917 Russian Revolution saw “rapid and in some cases radical emancipation of women and ethnic minorities” such as Jews, as Scheijen writes in his introduction to the catalog to “The Big Change: Revolutions in Russian Painting 1895–1917,” which is on view at the Bonnefantenmuseum in Maastricht until August 11. But just because strict quotas restricting Jews from living in large cities were relaxed and Jews began to proliferate in academia didn’t mean that religion was any less taboo.

“Private reading of the Bible was not encouraged within Russian Orthodoxy, even less so than in Roman Catholicism,” said Scheijen, who notes that liturgical texts, such as the New and Old Testaments, were read only in the “dead language” of Church Slavonic. The most public supporter of reading the Bible was the agnostic Tolstoy, to whom the young Diaghilev directed his letter, and the church excommunicated the former. It’s surprising, then, that a Bible appears on a shelf alongside a book of Paul Cézanne’s art in Ilya Mashkov’s “Self-Portrait With Petr Konchalovsky,” which is on view in the Bonnefantenmuseum exhibit.

At the National Gallery the Bible doesn’t get a cameo in the exhibit “Diaghilev and the Ballets Russes, 1909–1929: When Art Danced With Music,” but many of the set and costume designs of Léon Bakst are featured. Bakst, who was Marc Chagall’s teacher, was born Lev (Leib) Samoilovich Rosenberg but changed his name to sound less Jewish. Russian ballerina Ida Rubinstein, who was boycotted for portraying Saint Sebastian as a Jewish woman, kept her name because she came from a very wealthy family, Scheijen explains, but Bakst’s family was very poor. “As Bakst wanted to rise socially, for him it was more acute to ‘hide’ his Jewish antecedents,” Scheijen said.

Just as Chagall would later depict a Jewish crucifixion, Bakst was expelled from St. Petersburg’s Imperial Academy of Arts for painting a “crowd of Lithuanian ghetto Jews” in the background of a scene depicting the Madonna weeping over Christ,” in order to “emphasize the Jewishness of Christ and His mother,” as Paul Johnson wrote in his 1987 work “A History of the Jews.” Later, particularly in the 1920s, Bakst incorporated a Star of David into his personal letterhead. According to Scheijen, “This could suggest that Bakst became a supporter of Zionism in his later life.”

But Bakst, who rarely drew upon religious themes in his work, was unlikely to have encouraged his student Chagall to use religious content in his works. Diaghilev himself, despite his critical letter to Tolstoy, wasn’t as affected by his religious upbringing as he was by the repercussions of his sexual orientation, Scheijen says.

“I would speculate that general prejudice and his mother’s wish that he should marry and produce grandchildren were of far greater importance for his reluctance to identify as gay than for his religious upbringing,” Scheijen said.