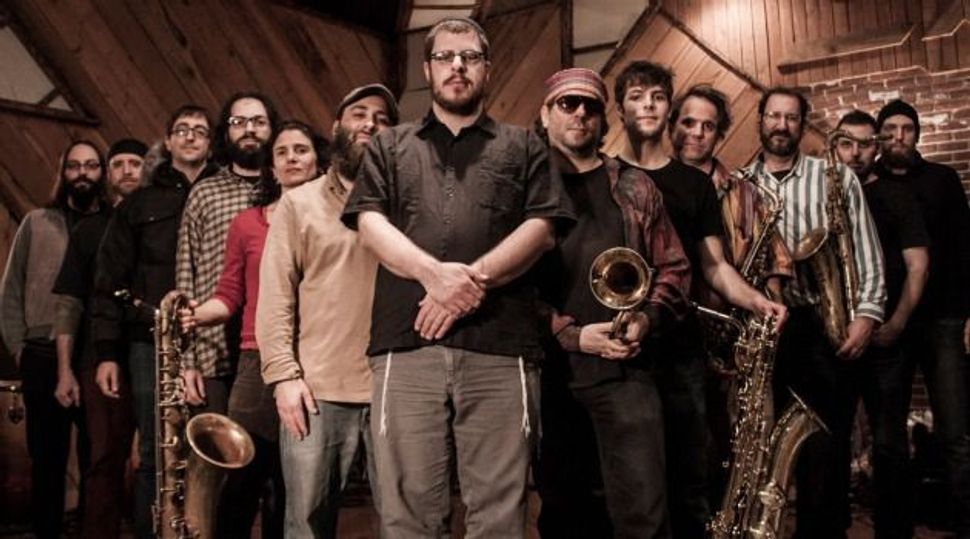 Perhaps the story of the great Jewish music in America is truly that of its encounter with African-American music. Three terrific new albums traverse the traditions of Afrobeat, jazz and reggae, while at the same time staying informed — in very different ways — by music more traditionally associated with the Jewish sound.

That two of the three projects incorporate the word “Zion” in their respective band names signifies an ethnic connection that isn’t merely musical, but perhaps mythic, as well, evoking less a physical locale than a dream, hope, perhaps even utopia, created through music.

Some bands take years to cook up an album. Zion80 rocketed — from its premiere in winter 2011, to extended residencies at New York’s jazz club The Stone, to a full-blown album release — in less than a year and a half. That’s a testimony to the great synergy of the 13-piece band which joins music of Fela Kuti and Shlomo Carlebach. Zion80 is world music in its truest sense. Carlebach brought the Hasidic chants, ritualistic songs and cantorial interludes of Jewish Eastern Europe into frameworks of American folk; Kuti summoned the sounds of the African diaspora into traditional Nigerian music.

Seeing Zion80 live, I remember wondering how this energy could retain itself in a recording. Because the band is staffed with some of New York’s finest improvisers, the air of constant surprise seemed crucial to the musical experience. Besides, the band’s leader and founder, Jon Madof, is also its conductor, and during live shows, he directs his ensemble, altering its course as the performance unfolds. And just as his mode of conducting has little in common with conducting in traditional Western music, the dynamics within the band are vastly different from those of a traditional orchestra.

Obviously Madof’s conducting is something the album listener cannot experience, yet the recorded tracks reveal Madof’s kaleidoscopic arrangements. Hearing one composition’s bridge performed in a duo that suddenly swells into a quartet and then into a 13-instrument powerhouse is breathtaking. From too-good-to-be-true wedding band to avant-garde troupe to ritualistic collective, the band can morph and soak you in hot, gorgeous rhythms.

The record’s highlight is the special appearance by clarinetist Harold Rubin— a legendary figure of the Israeli art scene. Now in his 80s, Rubin is also known for his work as a painter, poet and architect. A native of Johannesburg, he developed his jazz chops by collaborating with African musicians. In the 1960s, the South African government threatened Rubin with charges of blasphemy when he painted a subversive depiction of Jesus Christ. Rubin then escaped to Israel.

Nechushtan, born and educated in Israel, is part of the mass of young Israeli musicians living and working on the East Coast of the United States. It is no wonder that so much of the album feels like a conversation between the him and Rubin — each emblematic of his generation — closely listening and responding to each other’s ideas, supported by a tight rhythm section.

The clarinet is inherently a whimsical-sounding instrument, and Rubin pushes the whimsy to its flailing borders. As he goes into his melodic mode, he seems to steer the sound toward tender, lyrical fragility. Often, though, he explodes with a series of melancholy squeals and squawks, sounding much like some migratory bird struggling to explain itself. The trope of migration is key to both Rubin and Nechushtan. The Chekhovian overtones come to the fore in “Across the Ocean Like a Seagull,” A composition in which Nechushtan’s extensive solo is introspective, unraveled and determined — a flight of the sound that seems to have no prospect of a permanent landing.

About half a year ago, New Zion Trio’s founder, multi-instrumentalist klezmer-jazz-reggae-hard-rocker Jamie Saft, posted an Instagram photo of himself with H.R., vocalist of Bad Brains — the breakthrough African-American band known for its radical blend of punk and reggae genres. It was Saft’s way of announcing that the second album of his experimental reggae-dub project, New Zion Trio, would feature H.R.’s guest appearance, which made the release all the more eagerly anticipated.

Usually centered on vocals, reggae’s feel-good sound came to be identified with Rastafarianism, as it gravitated toward intertwining of social and spiritual concerns. And so, on the “Chant It Down” track, H.R. ruminates on spiritual desolation of the “Babylon,” calling on all to rise for “human rights.” Overlaying the vocal line with his own shivering falsetto harmony, he creates a hypnotic chant. One can’t help but wonder how a protest song, a call for action, can be so laidback. Yet that, perhaps, is the secret of reggae: a nonviolent chant “down” that does not fight as much as it exorcises the negativity that music is up against.

The rest of the album is instrumental, but in line with H.R.’s message: It is a continual free-flowing meditation on the themes hinted in the titles of the compositions: “Zion Heights,” “Cherub Dub,” “King’s Bread,” etc. Given Saft’s extensive proficiency in klezmer, it is not at all surprising that his klezmer-scented track “Pinkus” appears halfway through the album. It follows a more traditional reggae track called “Negus” (“king” in Amharic).

Though a stellar soloist and melody craftsman, Saft seems to hold back throughout the record, exploring instead rhythmic landscapes, veering into minimalism. Sometimes it seems he’s slowly digging for one note, one chord, pondering something, beholding. When asked what it is that poets do, American poet and thinker Denise Levertov reportedly answered, “They praise.” Much the same can be said of Saft and his band, poets of instrumental reggae rhythm and feeling.

Jake Marmer is the author of “Jazz Talmud” (Sheep Meadow Press, 2012) and is a frequent contributor to the Forward.