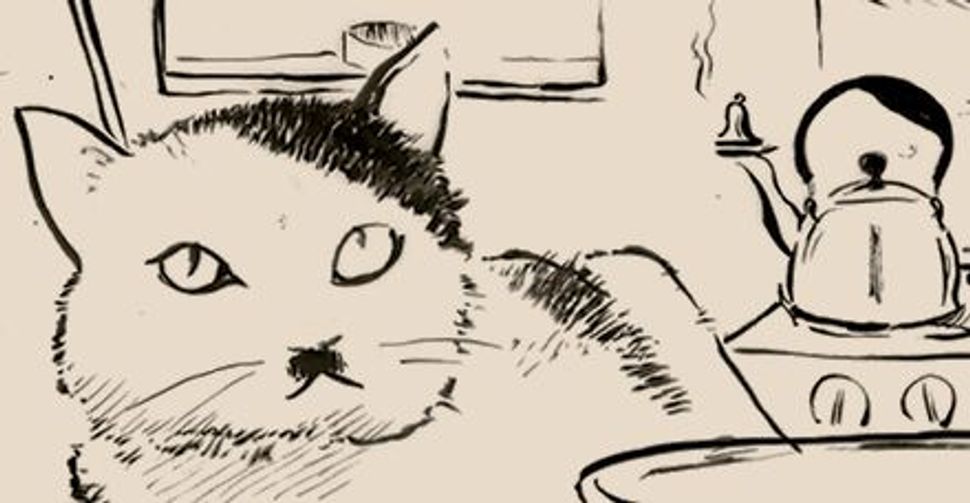 It has been dismissed as a tempest in a teapot, but the recent brouhaha over JC Penney’s now-infamous Hitler teakettle may be more significant than it initially appears.

Far from being an isolated incident, it is merely the latest in a long series of news stories in recent years about the “discovery” of Hitler’s face in unusual objects.

In attempting to explain the proliferation of Hitler “sightings,” journalists have invoked a range of theories. Writing in The Atlantic, Derek Thompson invoked the idea of “pareidolia,” referring to the human tendency to perceive familiar shapes in abstract forms — for instance, bunnies in clouds. This phenomenon, which taps into the same tendencies measured by a Rorschach test, may partly explain the phenomenon. So, too, may the impulse toward anthropomorphism, which has been visible in everything from Giuseppe Arcimboldo’s Renaissance-era vegetable portraiture to Jesus Christ sightings in grilled cheese sandwiches.

Yet this formalistic explanation begs a deeper question: Why is it Adolf Hitler, of all people, who keeps being spotted in random objects?

To answer this question, it helps to understand the wave of Hitler sightings in conjunction with the rise of what has been called the “Hitler meme.” Memes have become commonplace in Internet culture in recent years, having assumed myriad incarnations in the form of viral videos, images and catch phrases that have swiftly assumed iconic status. Prominent examples encompass everything from the film “KONY 2012” (about the brutal Ugandan guerilla leader Joseph Kony) to phrases such as LOL (“laughing out loud”) to emoticons.

Various observers have pointed out that among the countless memes that have spread on the Internet, one of the most familiar has been Adolf Hitler. He has been featured in online videos and photographic images; he has inspired groan-inducing puns and mindless games. The forms have been diverse, but what links them all is the use of humor. Whether employing irony, parody or satire, Internet representations of Hitler have been linked by the playful tendency to exploit his legacy for laughs.

The Hitler meme first attracted notice in 2006 with the first of what have since become thousands of YouTube video parodies of the German film “Downfall” (2004). Users combined clips of Bruno Ganz’s famous German-language meltdown scenes from the film with new, humorous and often profane subtitles expressing complaints about unrelated topics, whether the foibles of politicians, the music of teen heartthrobs or the late arrival of pizzas.

That same year, the Hitler meme found more bizarre expression with the creation of the website Cats That Look Like Hitler. Created in Europe, the site was devoted to posting user-contributed photographs of felines (called “Kitlers”) that allegedly resembled the Nazi dictator by virtue of the dark markings under their noses.

The playfulness of Things That Look Like Hitler was soon echoed in actual Internet games involving the Nazi dictator, such as “Six Degrees of Hitler,” in which Web users employ Wikipedia to try and land on Hitler’s entry in the fewest possible clicks from an initial, randomly generated entry. In 2012, an actual app for the game became available on Google Play.

The Hitler meme has spread most dramatically, however, in the form of image macros. Composed of photographs with ironic, superimposed texts, image macros have quickly become a staple of Internet visual culture — a classic example being “LOLcats” (photos of cats with grammatically stilted slogans, such as “I Can Has Cheezburger?”). Most Hitler macros are parodies of existing memes. One image pokes fun at LOLcats by portraying a Kitler with the accompanying caption, “I Can Has Poland?” Tens of thousands of other examples can be found on sites like Meme Generator, with many of them aspiring to incongruous absurdity (“Disco Hitler,” “Advice Hitler,” and so forth).

These and countless other examples suggest the arrival of a new Internet law — the “Law of Ironic Hitlerization.” Like “Godwin’s Law of Nazi Analogies” — which states that the longer an online discussion goes on, the greater the probability will be that someone will make a comparison to Hitler — the “Law of Ironic Hitlerization” asserts that the sooner an image becomes ironically ‘Hitlerized,’ the sooner it will rise to meme status.

Beyond the examples already cited, the law’s reach can be seen with the countless well-known visual images that have been satirized via the method of Hitlerization. Children’s cartoon characters have been targeted frequently on the Internet, with Hitler moustaches and Nazi uniforms being digitally applied to such otherwise blameless characters as My Little Pony, Hello Kitty, the Pokemon character Pikachu and all four of the Teletubbies.

In the spirit of the 1960s and ’70s trading cards Wacky Packages, corporate logos and products have also been Hitlerized: Burger King, for example, has been adjusted to read “Führer King.” Even emoticons have been Hitlerized; merely a few keystrokes on a computer keyboard — two backslashes, a colon, an equals sign and a vertical bar — enable one to produce a “typical Hitler,” as seen here: //:=|.

The phenomenon of Hitlerization serves several functions. First and foremost, it attracts attention. Like adding spices to food, adding a Hitler moustache and hairstyle and Nazi uniform to an image automatically lends that image a powerful kick of irony, sensationalism and controversy — and gets it noticed.

In a world where the average Web user spends less than 30 seconds on a Web page before clicking elsewhere, what better way to generate Web traffic than taking the Western world’s paradigmatic symbol of evil and turning him into a laugh line?

This process, second of all, has become something of a competitive enterprise. In the same way that the game of Scrabble challenges players to assemble words out of random letters, many Web users find it challenging to gaze at random objects and figure out how they might resemble the Führer. They compete with one another for bragging rights about who has come up with the most creative examples. (The competitive impulse has been especially visible in the effort of Web users to out-do one another in coining Nazi-related puns, among the more iconic, if tasteless, being “I did Nazi that coming” and “Anne Frankly, I don’t appreciate it.”)

Ultimately, though, Hitlerization satisfies what appears to be an ever growing cultural desire to laugh at the Nazis. In the most charitable explanation, laughing at Hitler by transforming him from a frightening symbol of evil into an amusing punch line demythologizes him and diminishes his aura of omnipotence. At the same time, of course, it normalizes the Nazi legacy by aestheticizing, universalizing and ultimately trivializing his historical significance.

Many of these trends help us make sense of the recent controversy over the JC Penney Hitler teapot. The Web user who posted the original photograph of the teapot on the website Reddit was undoubtedly familiar with the posted images on Things That Look Like Hitler. Moreover, there is the fact that subsequent user comments on the original post tried to outdo each other by creating Nazi-style puns suitable for the controversy (“Schindler’s Mint,” “Ceylon B”). Finally, not only did the original contributor and the website Reddit gain attention, but so did the struggling retailer JC Penney, which, though an unwitting participant in the controversy, sold out all the remaining teakettles in a matter of hours.

It is unclear whether or not the controversy should be seen as innocuous or as a cause for concern. It is certainly true that, in isolation, each individual expression of the Hitler meme amounts to little more than trivial — and often offensive — ephemera. At the same time, the exponential powers of digital reproduction make sure that the meme will reach countless millions of people worldwide. The cumulative effects of this development are unknown. But one thing seems sure: As the law of ironic Hitlerization continues to transform the Nazi dictator into a laugh-inducing staple of Internet culture, we are likely to encounter Hitler in unpredictable places on an increasingly frequent basis.

Gavriel Rosenfeld is a professor of history at Fairfield University and is the author of “The World Hitler Never Made: Alternate History and the Memory of Nazism” (Cambridge University Press, 2005). He is currently completing a book on the normalization of Nazism in contemporary culture.