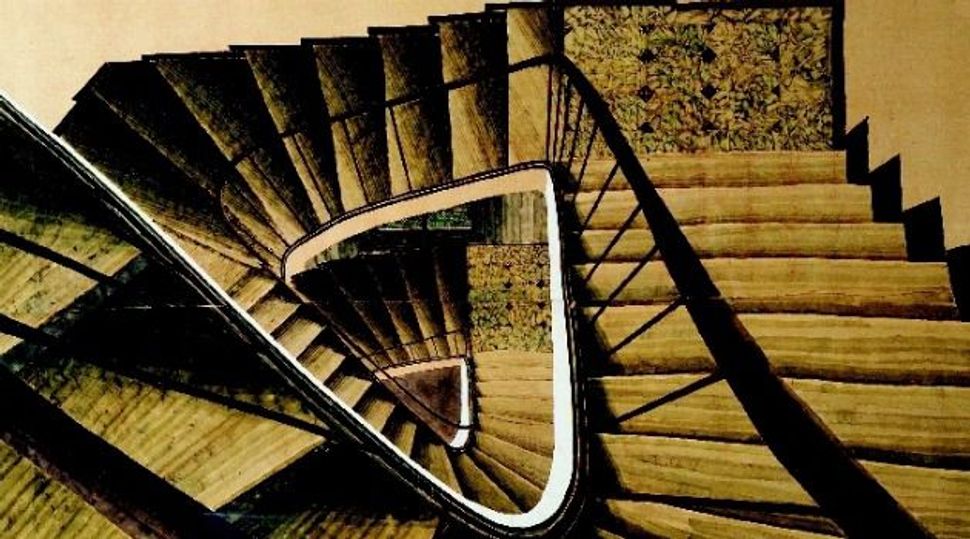 A Feeling of Vertigo: Stairways are prominently featured in the work of the French Jewish artist Sam Szafran. Image by Courtesy of Gianadda Foundation

The French Jewish painter Sam Szafran is the subject of an exhibit, “Sam Szafran, 50 Years of Painting,” at the Pierre Gianadda Foundation in Martigny, Switzerland, and a new book, [“Sam Szafran: Entretiens avec Alain Veinstein” (“Sam Szafran, Conversations With Alain Veinstein”)][3], that sheds further light on the artist’s inspirations.

Born Samuel Berger in Paris in 1934 to a family of Polish Jewish origin, in the 1960s, the artist began to sign his pastels and other artworks Szafran, adopting his mother’s maiden name in tribute to her family. Szafran is noted for his multiple obsessional images of stairways that swerve dynamically in the style of the 1920s British Vorticist movement of painting, co-founded by the painter and writer Wyndham Lewis. Another quintessential Szafran subject is an interior where a sitter is overwhelmed by vast, all-engulfing plant foliage. Szafran’s paintings express dynamically a sense of anxiety, teetering on being overwhelmed. This is perhaps to be expected, given the artist’s wartime experiences, during which his father, uncles and aunts were all murdered in concentration camps.

In 1942, as a boy, Szafran escaped from the notorious Vel’ d’Hiv police roundup, in which French gendarmes cooperated with Nazi policies to deport and exterminate Jews. Szafran claimed to be the son of a building employee at the Vélodrome d’Hiver (literally, the winter bicycle track), where thousands of Jews were imprisoned, and fled detainment. Hiding in southern France during the rest of the Occupation, Szafran was arrested in 1944 and was imprisoned briefly in the Drancy internment camp before American troops liberated it.

In the new book, Szafran tells Veinstein — a French poet, novelist and radio interviewer, that his works reflect a “kind of intellectual ghetto translated into images.” The artist’s grandparents lived in Polish ghettos, and Szafran himself was born in Le Marais, the Jewish ghetto in Paris. The claustrophobic nature of his stairway scenes derives from the artist’s impression that “there is no exit.” Their “inextricable” aspect is more important than any feeling of vertigo they might produce.” To their creator, the stairways signify “endless waiting. The stairway represents waiting because it’s a spiral that leads you from one floor to another, which lowers you from one floor to another, bit by bit….”

Sometimes Szfran juxtaposes stairways with glimpses of his studio, where boxes of brilliant pastels are splayed open invitingly as if symbolizing the prospect of creative toil. This temporarily interrupts anguish and preoccupations. Although not a student of Judaica, Szafran has for decades incarnated the Babylonian Talmud’s injunctions about industriousness, such as, “Great is labor for it honors the workman.”

More recent works depict Lilette Szafran, the painter’s wife, seated amid palm trees and other hothouse plants. The quasi-suffocating foliage is like the backdrop of a hermetically sealed winter garden, in this case protecting the artist and his beloved by shutting out not just the grim and gritty Paris suburb of Malakoff where they have lived since the 1970s, but also indelibly tragic family memories. These extended into postwar Paris, where Szafran lived for a time as a homeless heroin addict and often hampered his career with his rude behavior toward denizens of the Paris art world.

As a teenager working as an office boy for the World Jewish Congress, he delivered papers to the home of the French Jewish author Edmond Fleg who introduced him to Marc Chagall. Szafran’s reaction to Chagall’s postwar creations? “If that’s what painting is, it’s crappy.” Only years later, after seeing Chagall’s designs for the Moscow State Yiddish Theater, did Szafran revise his opinion.

Nor did Szafran warm to the Romanian-born French-Israeli painter Avigdor Arikha, despite respecting his work: “I had more reservations about [Arikha’s] personality: He was humorless, and I am annoyed by Jews who lack humor.” Even Darius Milhaud, a mild-mannered and humorous French Jewish composer, received some sharp-tongued irony from Szafran, who in the early 1950s was working as a paid figure model for Daniel Milhaud, the composer’s son and a painter. When the elder Milhaud asked Szafran if he liked music, the teenage visitor replied, “Daniel plays your music for me, and I find that Bach, comparatively speaking, is a bit better.” Milhaud, known for his benevolence, simply replied, “Young man, if I’ve been able to help you like Bach, then I haven’t wasted my time.”

Szafran also enjoyed warm friendships, such as the one he had with Abraham Baratz, a Romanian French ceramist and former chess master who taught Szafran how to play chess. Chicago-born American Jewish artist Irving Petlin sublet his Paris studio to Szafran in 1968, when the latter began to seriously work out his subsequent aesthetic message. Szafran developed friendships with the author Emil Cioran, the photographer Henri Cartier-Bresson, and the artist Alberto Giacometti. Previously shy of interviews, Szafran accepted Veinstein’s offer of a sustained conversation, partly because he thought Veinstein’s elongated facial features resembled Giacometti’s; another attraction, according to Szafran, was that Veinstein had Polish Jewish roots, like his own. There the similarity ended, since Veinstein, born into a comfortable bourgeois household, survived the war in the Free Zone, unlike the working-class Szafrans, who experienced wartime travails and tragedy.

These experiences have had a lifelong impact on Szafran’s artistic destiny, compounded by his personal tendency to confront challenges of all kinds. In postwar Paris, where he appreciated novels by the notorious anti-Semite Louis-Ferdinand Céline, Szafran traveled to Céline’s home outside Paris and informed the writer: “Mr. Céline, I have one question for you: What did I ever do to you? I am Jewish.” Céline’s wife threw Szafran out of the house before the author could respond, but as in his probingly mysterious artworks, Szafran’s questions have always been more interesting than any answers they might elicit.