So, a Jew, a Black, a Pakistani and a President Go to Germany 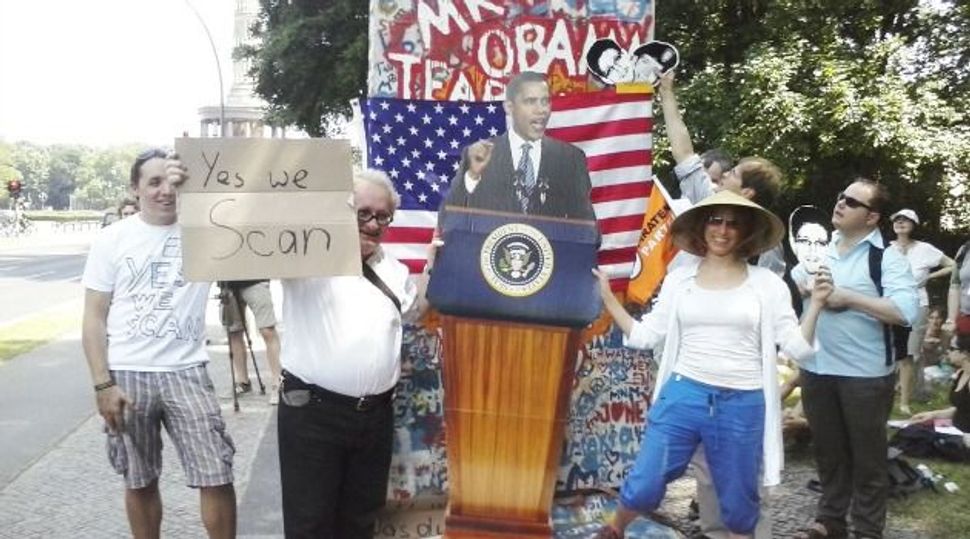 On the eve of Barack Obama’s arrival in Germany, security measures are unparalleled, media sources claim. People tell me that America’s first black president is Germany’s dream and they want to make sure the dream never ends. This, of course, might explain why residents near the Brandenburger Tor have been asked to keep their windows shut while Obama is in town. Great dreams require shut windows and, naturally, I want to be part of the dream.

And so, just ahead of Obama, I land in Germany.

I arrive at an airport in northern Germany where I meet a black man by the name of Ben.

Is he excited about the black president?

Not really, he says. “That’s all politics,” he tells me, and reality has nothing to do with it. What’s reality?

Well, I got that. Maybe it’s politically incorrect to say, but Ben’s skin is much darker than Obama’s, and so what’s his point?

“I am African, and I live here for 30 years and I can’t get nowhere,” he tells me. “I’m a taxi driver because I can’t get up on the social level because I’m black. Back in Africa I was an air traffic controller, but the Germans told me that I better forget my profession. They said to me, very openly, that this job is reserved for white Germans.”

I take a train to Berlin. It’s hot inside, the air conditioning doesn’t work properly, the windows are hermetically closed and the place is packed but for a couple of empty seats next to a bearded man with a shaved mustache. I sit down.

Hallo man, who are you?

The man looks at me, probably thinking that I’m retarded.

Where are you from, I ask.

Now he gets suspicious.

Where are you from? Are you German?

Where are you going?

At this point I start feeling like a CIA agent, and the Pakistani seems to concur. He does not reply.

You live in Germany?

Do you like the bombs that the West drops on your cities?, I ask him.

He stares at me, totally surprised at my comment, gives me a shy smile and says slowly and quietly, “I’m a businessman. I sell clothes made of Pakistani cotton to German companies. This is my first time not just in Germany but in the West. Two days I’m here, but this is not easy for me. Everywhere people look at me, anywhere I go, then they look away and walk away. I can tell that they don’t like me. I didn’t do anything wrong to them. I have a business, I have a wife, I have a child. I came for business meetings and I thought I’d spend a few days in Europe. I’m going now to Berlin. Do you know nice places I should see?”

I tell him that Brandenburger Tor is nice but that I don’t think he’d be able to see it today. There’ll be tight security in Berlin due to Obama’s visit. He tells me his name is Zishan and he seems scared of the German security forces.

“Any other cities I should see?” he asks.

Munich is a nice Bavarian city, and Bavarians are warm people, like the Pakistanis, I say.

Zishan seems to like the idea, and as it turns out this very train continues all the way to Munich. It will take another six or seven hours for the train to get there, but Zishan is all excited to meet Europeans who might like him.

“Are there Turkish people in Munich?” he asks.

You will find Turks in Munich, and you’ll be able to buy Halal meat there.

Zishan decides to skip Berlin and go to Munich. He stays on the train, where he’s charged premium price, and rides his way away from Obama.

I get off the train in Berlin and proceed in direction of the Bundestag, but soon am stopped by security. No one is allowed to cross from this point on, a policeman tells me.

What are you afraid could happen if the roads were open, that some Pakistanis would come by?

I walk to Tiergarten, near Siegessäule monument, where the Pirates Party is having a demonstration against Obama’s administration’s various surveillance programs that came to light recently. Based on the huge front-page headlines against those programs that I spotted in various newsstands earlier in the morning I expect that at least one hundred thousand people will show up. Not only me: German TV and radio stations obviously expect he same, bringing in TV crews and sophisticated recorders. The demonstration is nicely organized: in the center they have a big life-like image of Obama delivering a speech, in obvious mockery of the American President, as some of them carry flyers that read “We Can Scan.” Total number of demonstrators? 25, give or take a couple. The reporters here are quite disappointed, in addition to being pretty bored. Only when I pick up one of the flyers and stand next to ‘Obama’ does a genuine build up. Cameras click in rapid succession.

I keep on walking.

On 17th June Street I see armored vehicles, like those used in Syria these days, and they’re ready to block any invading army. I feel bad for the people inside those armored animals, where the temperature reaches 104 degrees, and I want to tell them that the coast is clear, Zishan is going to Munich, but I say nothing, just keep on walking, until I meet Jan at a security roadblock.

Jan is a young man who came all the way from the Netherlands to be at this roadblock, because he says he loves Obama very much.

Why do you love him so much?

“He is the bravest leader in the world.”

What’s the bravest thing he did?

From a few blocks away — at Brandenburg Tor — the sound of an applauding crowd can clearly be heard. I open my iPad to see what’s happening and read a Reuters report that “Obama defends intelligence tactics in wary Berlin.” I don’t know which Berlin they are referring to. I leave the roadblock and walk back, but midway, police stop me. They’ve just found out that Obama’s motorcade will pass by and they have decided to close the road. They order businesses to shut down, and even the Sony Center cinema is evacuated.

It is frightening to witness how easy it is to curtail free movement in the name of security.

If this this is indeed Germany’s dream — skies controlled by pure whites, streets cleaned of bearded Pakistanis, roads guarded by armored vehicles, leaders who can tell every time I open or close an iPad — let Germany have it. To me, and 25 Pirates, this is a sheer nightmare.

*Tuvia Tenenbom is the author of the German bestseller “I Sleep in Hitler’s Room.” He is currently at work on a new book about Israel.

So, a Jew, a Black, a Pakistani and a President Go to Germany