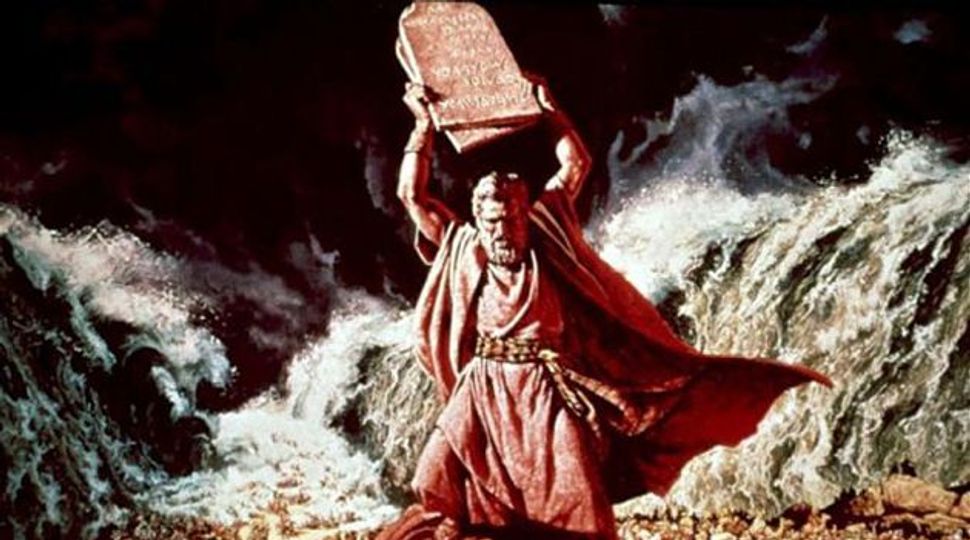 Fast Break: Charlton Heston shows how the tablets get broken.

On the 17th of Tammuz, which will be observed as a fast day on June 25 this year, Moses smashed the Ten Commandments on the foot of Mount Sinai after hearing the sounds of and seeing the idolatrous celebrations devoted to the Golden Calf. The idea, presumably, was that the bovine abomination was so atrocious that the Israelites didn’t deserve the Tablets of the Law; although if Moses’ prophecy had informed him about eBay, perhaps he would have held onto them.

With the Old Testament jammed with legalistic verses which often don’t lend themselves to artistic exploration, artists have tended to latch onto the narrative episodes that have grand kinetic movement — the animals entering the ark, the plagues of Egypt, the crossing of the Red Sea, and those sorts of things. The smashing of the Ten Commandments is another oft-represented scene, not easily reduced to a top 10, so here are 11 of the most noteworthy examples:

In this painting by Rembrandt, who lived in the Jewish quarter in Amsterdam and is said to have worked from Jewish models, Moses holds the Tablets above his head, as if about to cast them at the viewer. Rembrandt, who often relied on Menasseh ben Israel for his Hebrew inscriptions, may have appreciated the irony of Moses holding the second tablet over the first; the top Hebrew inscription depicted is the sixth commandment — don’t kill — and Moses is minutes away from descending the mountain and instructing the Levites to essentially wage a civil war and “kill, each man, his brother, his neighbor, and his relative” (Exodus 32:27-29). As I’ve noted elsewhere, Rembrandt’s Hebrew inscriptions are plagued with problems, but the painting is noteworthy for the ambition of its epigraphy. 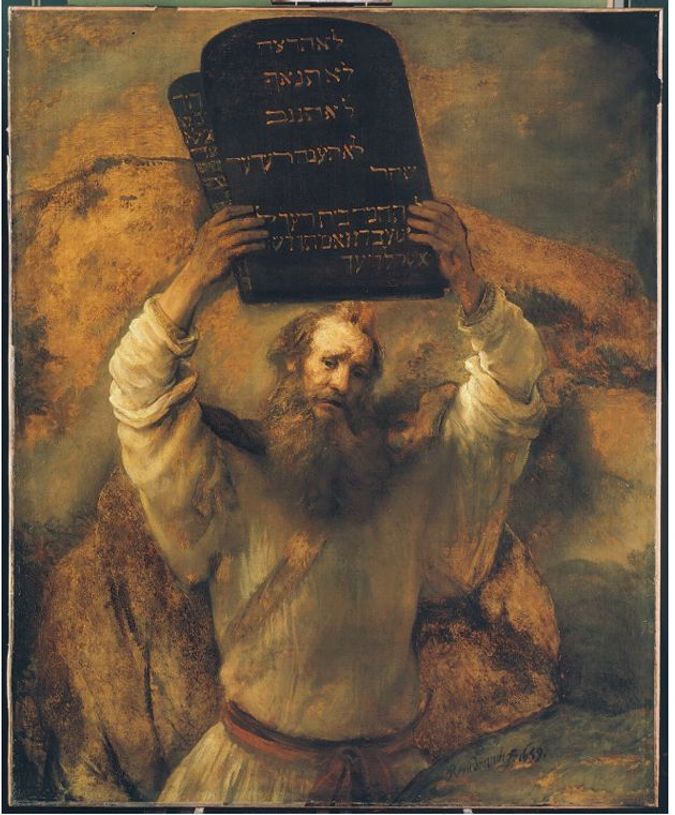 Cosimo Rosselli, The Handing Over of the Tables of the Law (1481-83, Sistine Chapel)

In this panorama landscape, the Florentine painter depicts Moses — identifiable by his golden tunic and dark green robe — at least three times. Atop the painting, a kneeling Moses (having shed the robe) receives the Tablets from a divine entourage; horned with light rays, Moses presents the Commandments to the Israelites in the bottom left corner; and in the bottom central position, as Joshua looks on, Moses lifts one of the Tablets above his head ready to heave it. Whereas Rembrandt painted Moses in an abstracted space, Rosselli’s larger landscape contains dozens of figures, as well as trees, tents, the Golden Calf, castles, a seascape, and the rarely depicted scene of the Israelites being forced to drink the ground-up Calf dust. 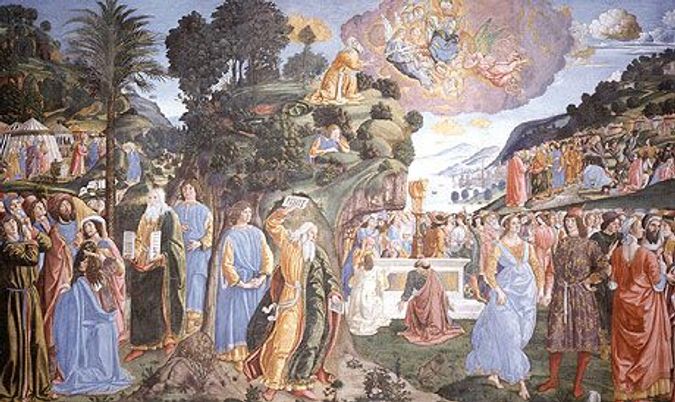 Guido Reni, Moses with the Tablets of the Law (1624-25, Galleria Borghese)

Like Rembrandt, Reni handles his Hebrew inscriptions in a highly commendable fashion; in fact, he probably has fewer errors than the former. Both painters also represent Moses in a non-descript landscape, which disorients the viewer, although Reni suggests the Israelite camp in the distance behind Moses. The work is mostly about Moses and the clouds — perhaps suggestions of God — and Reni crops the scene in such a way that much of one of the Tablets resides outside of the picture frame. That may mean that Moses is still in the process of receiving the Tablets (which would beg the question why he has the second one already), or that he is in the process of throwing the first Tablet. Assuming that is the case, there’s an awful lot of momentum and drama attached to Moses’ throwing arm. 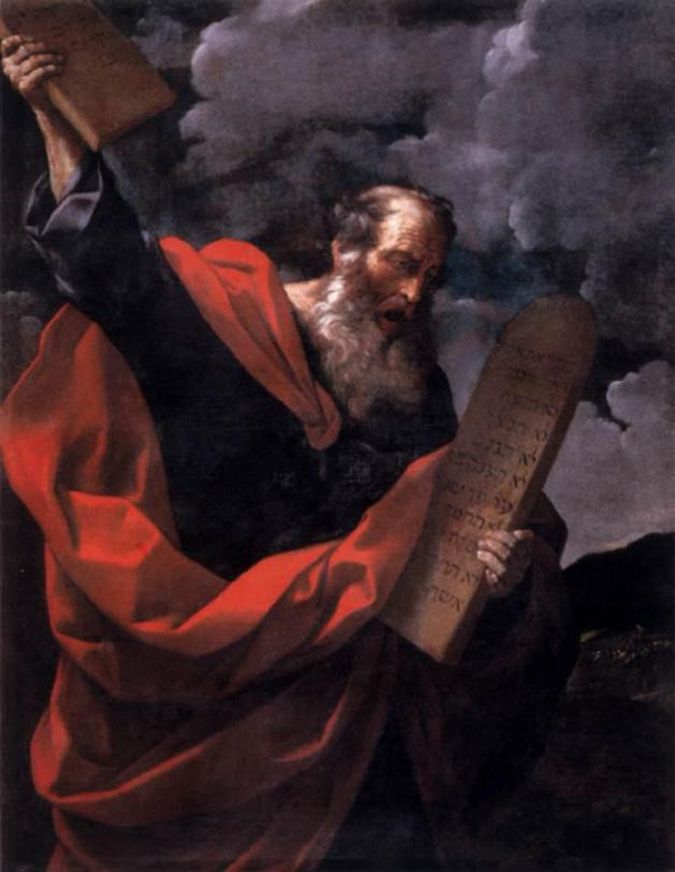 Although Ghiberti’s panel on Moses in his striking Gates of Paradise doesn’t depict the smashing of the Tablets, strictly speaking, it still deserves an honorable mention on this list for the way it lays out the progression of the narrative. Ghiberti’s Sinai is less of a desert mountain and more of a Florentine hill — but that should be taken aesthetically rather than literally, or it would beg the question why there was such a communication problem between Moses and the Israelites — and the panel represents Joshua (presumably) burying his head in his hands just beneath Moses. The contours of the mountain below feature such deep and jagged ridges that the work almost suggests that Moses literally cast the tablets and did damage to the surface of the doors. Or at least it’s foreshadowing it. 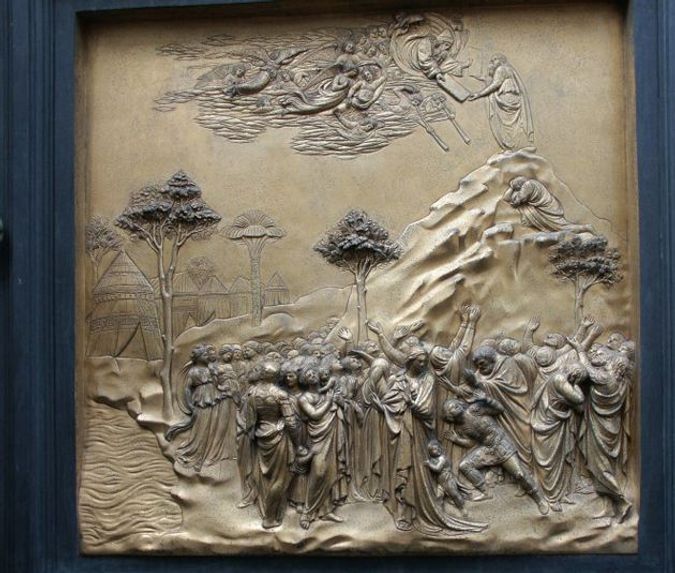 Under Chagall’s brush, the Tablets are the biblical equivalent of trick candles on a birthday cake or Road Runner. Although Moses has cast the Tablets on the ground, where, indestructible (save for some mustard-like yellow paint on their surface), they remain upside-down. By emphasizing the power of the Tablets as physical object, Chagall avoids sentimentalizing the narrative with decimated Tablet parts strewn about. The tragedy here, to Chagall, is that the Tablets sit disrespectfully on the ground whatever their condition. 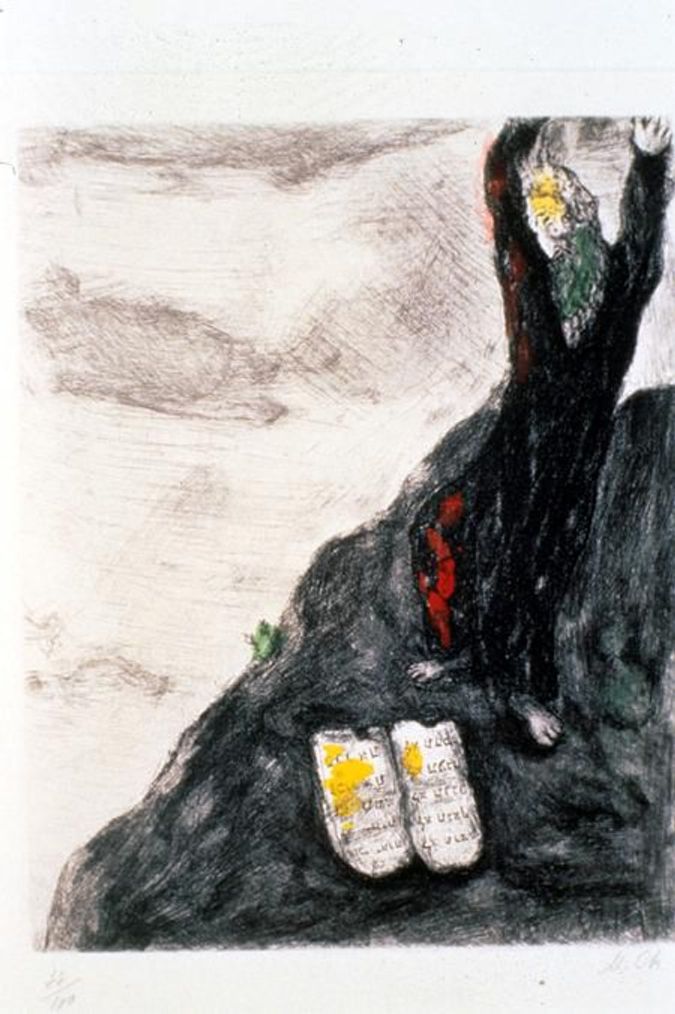 Attributed to Circle of Baccio, Circle of Maso Finiguerra, The Worship of the Golden Calf with the shattered Tablets of the Law and a fierce storm (1470-75, British Museum)

In this drawing, with complicated attribution, the artist or artists make the opposite interpretive decision. Moses is nowhere to be seen in this work, which depicts the chaos surrounding the Gold Calf, which sits atop a pillar adorned with floral patterning. Among the uprooted trees and general destruction are the decimated Tablets. Devoid of human forms, this work underscores the desolation that the Calf betrayal caused. Gustave Doré, Moses Smashing the Tables of the Law (1866?)

Doré, a French printmaker known for his dramatic and fantastical illustrations of biblical stories, tackles the scene of Moses casting the Tablets from a low vantage point. Moses, standing on a couple of steps (hardly a mountain), lifts the McDonald’s logo-styled, joined and rounded Tablets above his head, as a jagged lightning bolt (divine anger?) juts out from behind his right arm. At Moses’ feet, nine Israelites look on in horror or in various other stages of despair. The billowing robes and intense stormy sky are signature Doré moves, and they bear similarities to his Wandering Jew. 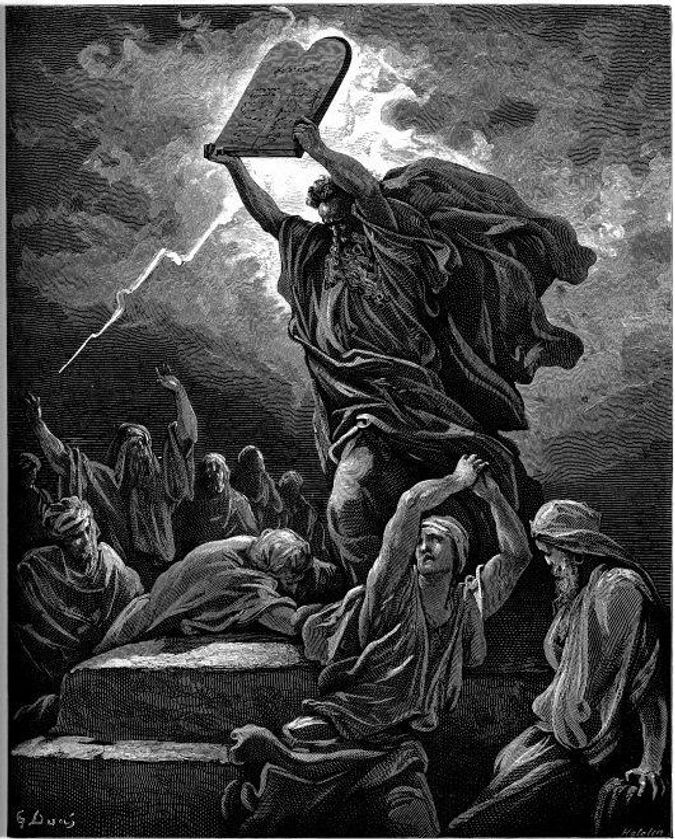 This manuscript illumination by medieval English scribe and artist de Brailes represented a horned Moses descending Sinai — with each of the Tablets broken in two at his feet — to encounter the 13 people worshipping a miniature Golden Calf, also standing on a column. The manuscript features an artistic convention that has happily disappeared, in which all of the members of a crowd are exactly the same height and have essentially the same facial features. But de Brailes’ illumination is timeless for a much more sophisticated move — the curled rocks that make up the mountain, as well as gold leaf humps in the background, all evoke tombstones. And tombstones were exactly what was in store for most of the Israelites (and everyone unfortunate enough to encounter them) during the rest of their journeys in the desert and ultimately the Holy Land. 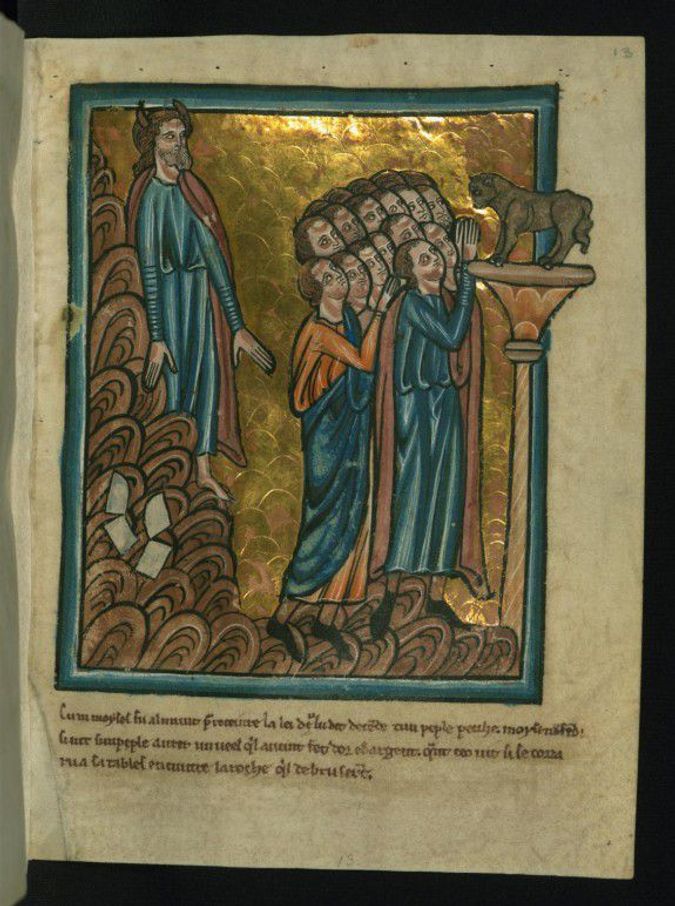 Moses might as well be an inmate in this illumination; he wears a striped robed, and his head peers out from behind two enormous Tablets, each of which is nearly as tall as he is. No doubt, he is bench pressing more than five times his own body weight. Beneath the mountain, seven figures cower in fear (and in prayer) with good reason; when the rocks drop, they’re liable to take out Moses and all of the assembled figures. 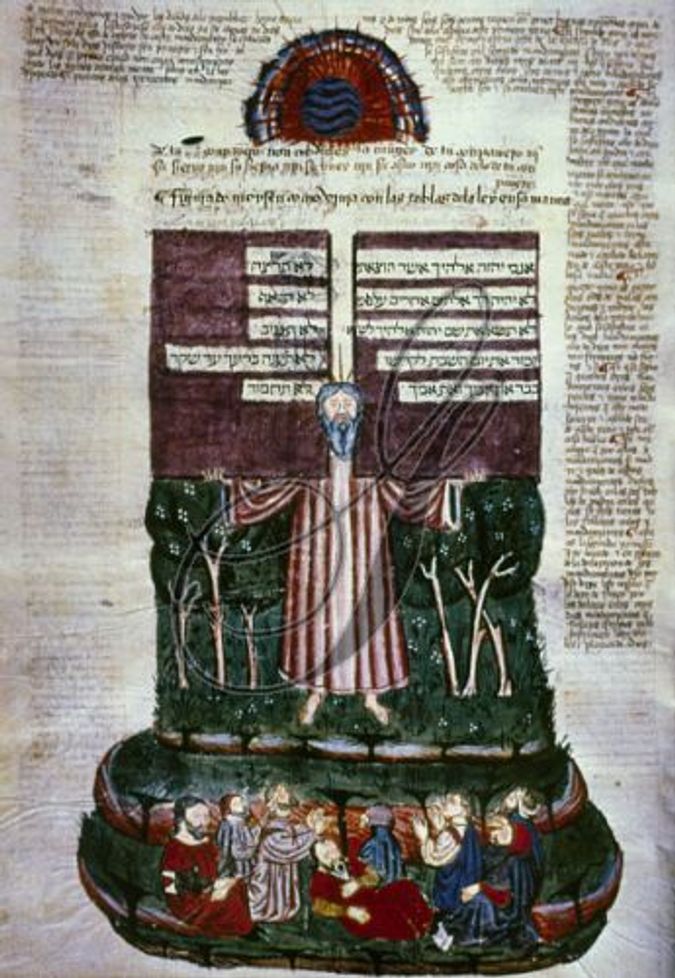 American sculptor Smith (1902-1980) drew on biblical imagery when he titled the abstract work, which resembles a tent with two chimneys. “This sculpture’s forms reminded him of the Hebrew prophet Moses holding the tablets of the Ten Commandments in his outstretched arms,” according to the Toledo Museum of Art website. (The “arms” could also work well as horns.) When it comes to Moses’ Tablets, of course, what goes up must come down, and darker forms at the bottom of the sculpture appear to foreshadow the Tablets’ fall. 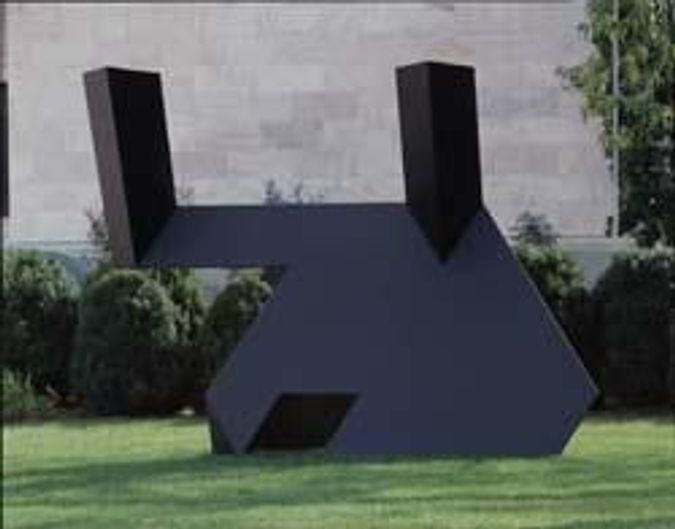 Sculpted by one of the Renaissance’s great artists, this figure of a horned Moses holding — possibly about to be thrown to the floor — the tablets of the law was the subject of a famous monograph by Sigmund Freud. Both the original sculpture, commissioned by Pope Julius II for his tomb, and Freud’s 1914 essay, deal with the intense psychodrama of a leader who, having been presented with the Law for his people, is confronted by a people not ready for it. 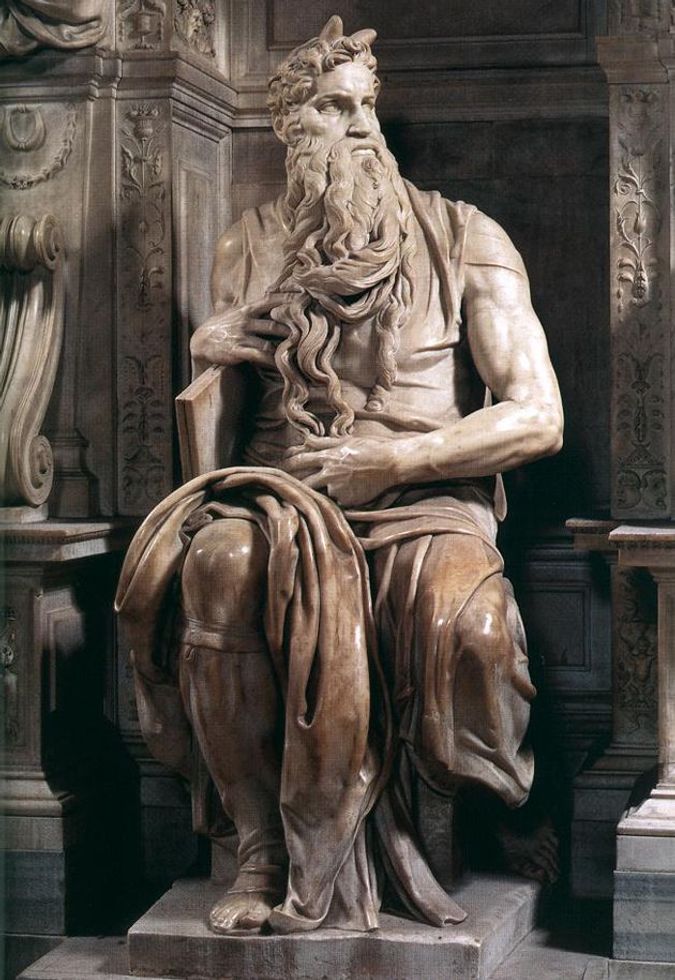