From Dancing Barres to Prison Bars, Avodah Makes Its Mark 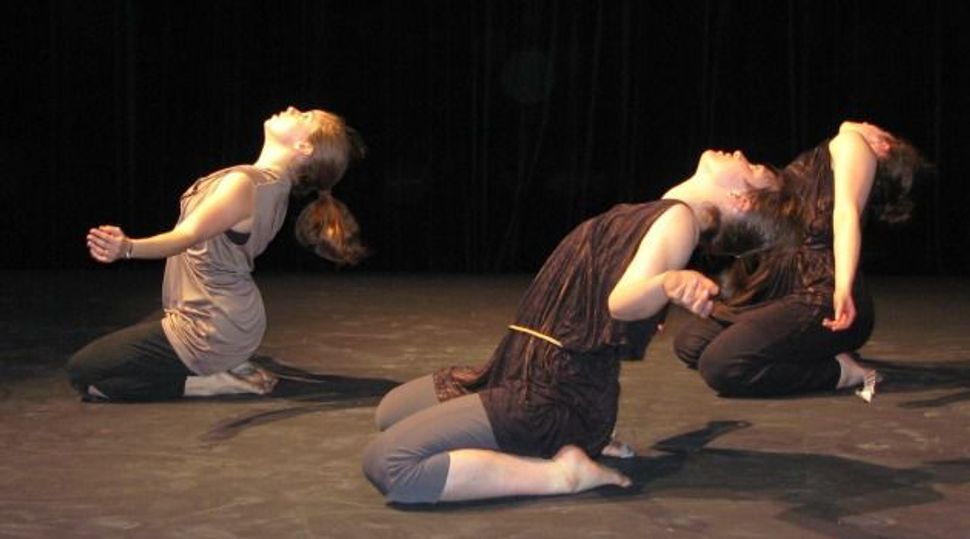 Four days before the debut of their newest work, entitled “moving voices inside out,” the four women of Avodah Dance were holding a bumpy run-through in a fourth-floor playroom in Manhattan’s 14th Street Y.

Dancer Sarah Zitnay, her black socks more holes than fabric, seared the edges of adhesive tape with a lighter and then laid the tape across her split big toe to seal and protect it during rehearsal. Leah Ives marked her opening solo near the jungle gym; afternoon light fretted the rooftop HVAC ducts with shadows. The dancers moved, repeated; moved again, revised, and moved again through each part of the dance.

How Avodah rehearses for public performances in New York, in borrowed space and at odd hours, stands in stark contrast to how the dancers create work that is utterly private, save for specifically invited guests.

Three times a year, the artistic director, Julie Gayer Kris, and her company travel to women’s prisons in New York, Delaware and Connecticut for weeklong dance residencies with incarcerated women. Exercises, improvisation and hours of conversation give rise to shared themes and longings — loneliness, isolation, grief, shame, sadness — that, over hours of practice, become movements and, eventually, formal choreography, presented in a performance with and for the prison community.

At some facilities, like Connecticut’s York Correctional Facility, performances for family members give the women inside and their relatives outside an opportunity to erase old images: A last image of a mother being led off in handcuffs, for example, can be replaced by something more joyous.

This work is Avodah’s barefoot and sweaty tikkun olam — repair of the world — a week at a time, year after year, with companies of women largely unseen and silenced. That’s because Avodah takes its name — “service” — literally.

“We have the chance to give women a voice, but through our own language, through dance,” Gayer Kris said. That incarcerated women deserve a voice is the belief that animates Avodah’s prison work: Bringing those voices outside, to the public, is the goal of Avodah’s current project.

Leaving work and family behind in New York City, the dancers enter each facility through metal detectors, bag checks and double doors that seal shut behind them. Often they wait: for officials to clear paperwork; for inmates to be counted before being released to programs; for prison staff to escort them through the facility. They wait, because the work has meaning.

Gayer Kris says that working within the prisons has redefined her as a dancer, a woman and a mother. For one thing, it’s safe to bet that not every modern dancer in New York City receives layette gifts from incarcerated women, as Gayer Kris did when her young son, Mars, was born.

Meredith-Lyn Olivieri, part of Avodah since 2008, says that making dance challenged her parochial sense of the art as exclusive. “I had forgotten dance is for ‘other’ communities, too, for people of all backgrounds and ages,” she said. Working in prison “got at the heart of me.”

Just as Avodah exists in two spaces — inside prison facilities and outside, in the world — it keeps a callused foot in both the Jewish and secular worlds. “We are a Jewish organization,” Gayer Kris said. “But Avodah is not just a dance company doing dance. Text is a big part of what we do; it inspires us. We are immersed in text to develop our pieces.” Avodah’s founder, JoAnne Tucker, called the program Torah in Motion, a blend of movement and midrash. Gayer Kris, who is 40, continued the work when she became artistic director nearly a decade ago.

Avodah’s stance in the Jewish world mirrors Gayer Kris’s own: “I’m not a shul Jew. I’m a text Jew, a culture Jew. I really like study and the ‘values’ aspect of Jewish life.”

Beyond Gayer Kris, the three other Avodah dancers, all in their late 20s, are not Jewish.

Judaism may be Avodah’s foundation, but “I don’t think of Avodah as a Jewish ensemble,” Gayer Kris said. “It’s for all communities, not just the Jewish community. But there’s something Jewish to the bones of it: We talk, we argue, we wonder and discover. In that way they’re Jewish, these ladies.”

The “arguments” wrangle the interstices between movement and language — from aphorisms taken from the Torah, like the admonition to treat strangers with respect, to poetry and spoken-word passages chosen to illuminate the movement. When dancers need help understanding texts, experts such as Rabbi Norman Cohen, of Hebrew Union College-Jewish Institute of Religion, are called in to help them find their own interpretations.

“We begin with a collage of our experience. Everyone speaks, everyone contributes,” Gayer Kris said.

The process applies to Avodah’s public and prison work, where the dancers meet “veterans” of prior workshops as well as newly recruited dancers, some of whom volunteer after the prior year’s performance and wait their turn until the calendar rolls around again. At the end of each performance, Gayer Kris and her company offer a movement blessing to the dancers, bowing low to a circle of empty chairs.

In addition to movement, ‘moving voices…’ incorporates spoken word by British poet Leah Thorn, who toured seven states and nearly as many women’s prison facilities in 2012 on a Winston Churchill Travel Fellowship grant and was struck by the fact that about half the artists working with incarcerated women were Jewish and either daughters or granddaughters of Holocaust survivors. Thorn’s mother grew up near Dusseldorf and came to England as part of the Kindertransport; her father immigrated a generation earlier, in the wake of pogroms.

“I was raised just after the Holocaust, with all the pain and despair,” Thorn said. “I learned outward calm in the chaos, in the face of dehumanization and immense pain. I decided very early on that I didn’t want to be a bystander [as many Germans had been in World War II]. It was the bystanders that allowed the Holocaust to happen.” That desire to engage brought Thorn into prisons in the United Kingdom.

“Creativity is a source of liberation,” Thorn said, high walls, barbed wire and watchful guards notwithstanding.

On the Sunday rehearsal before the performance, Avodah’s dancers had appeared to be in trouble. “Moving voices…’’ is an ambitious work that blends dance, video and spoken words. No neat narrative seemed to stitch the elements into a tidy story. Duets, trios and solos seemed almost arbitrarily sequenced, their meaning opaque. Yet four days later, in the stripped-clean, honey wood sanctuary of HUC-JIR, Avodah presented a polished and evocative tapestry of words and movement. In just a few days’ time, the dancers had stitched together Sunday’s disparate parts into a coherent, provocative whole.

After the performance, Avodah’s drummer, composer and resident musician, Newman Taylor Baker, told a story of uncertainty and faith: the time that one of his percussion instruments disappeared during one of the company’s prison workshops.

“I had a bell that went missing,” he said. “I was sure I had it — but was I sure enough that I had to say something? Should I just say nothing? It’s a major security issue; what if they threatened to cut off the program?”

That threat is far from capricious. According to Joe Lea, a librarian at York Correctional Facility, “Unfortunately, it can all be gone tomorrow. If we get a new warden [who opposes programs], this can be shut down… The women and the staff have no recourse.”

Still, Baker persisted in the hunt for his bell — with the help of the women in the dance workshop and, critically, the women who were part of the larger community, who risked disciplinary action for admitting to the bell’s absence. But no one was punished by the warden or staff. “What resulted was a sense of trust between the inmates and the administration,” Baker said. “I don’t think that bell was ever found. But the program continued. There was real proof that we had created something for the whole prison, not just the women in the classroom,” who had volunteered for dance.

“At any point, strip away the uniform and we would be the same,” Olivieri said. “A human’s in there. All identities are choices.”

“Working in the prison gives me a huge amount of gratitude for my life,” her fellow dancer Leah Ives explained. “The women we work with find hope, give compassion, stay determined to make a change in their lives, generously give a smile and a laugh.

“Hope is something they really have to fight to find. I can’t help but to be in awe of their strength.”

Helen Zelon is a Brooklyn-based writer. For American Theatre, she wrote an article called “Shakespeare Behind Bars,” which provided the basis for a 2005 documentary of the same name.

From Dancing Barres to Prison Bars, Avodah Makes Its Mark