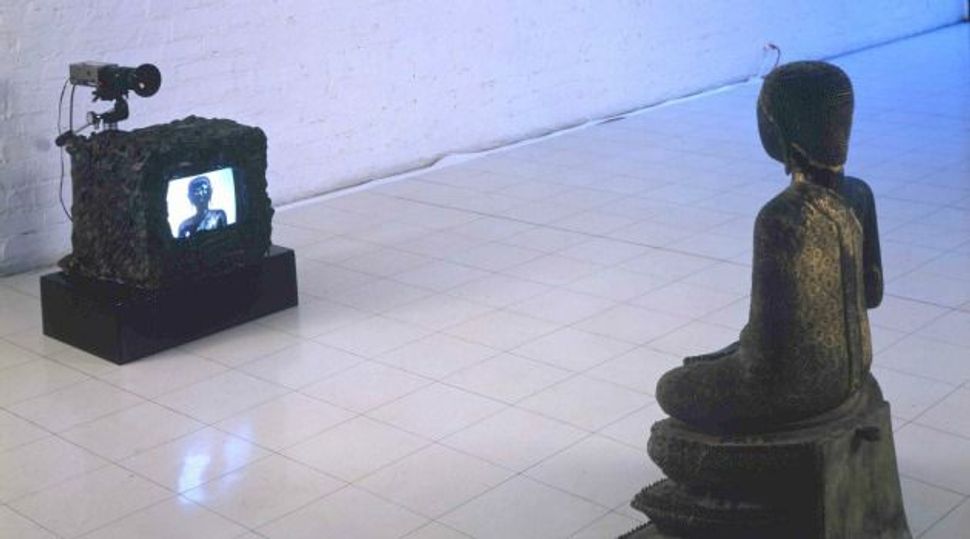 Barnett Newman’s steel sculpture “Zim Zum 1” typically resides on the roof of the San Francisco Museum of Modern Art. It now sits across the street, on the ground floor of the Contemporary Jewish Museum, where it is the first piece to confront viewers of the exhibit “Beyond Belief: 100 Years of the Spiritual in Modern Art.”

Newman’s title references the kabbalistic notion of “retraction,” wherein divine sparks were enclosed in containers called kellipot, Hebrew for “shells,” to make space to contain the world. Walking between the steel “walls” of Newman’s sculpture — which evokes Richard Serra’s “Torqued Ellipses”— the sense of claustrophobia mimics the divine withdrawal.

“Under the tension of that ‘Tzim-Tzum’ that created light and the world, [each person] can experience a total sense of his own personality before the Torah,” reads a quote from Newman featured in a CJM wall text. The quote betrays the awkwardness of the Jewish artist — famous for his “Stations of the Cross” — when it comes to some of the Jewish texts he drew upon.

“Zim Zum 1” has never been lent to any place before, according to James Leventhal, deputy director of development at the CJM. Leventhal led a preview of the exhibit with curator Karen Tsujimoto. “Beyond Belief,” which will be on view from June 28 to October 27, is the first of several exhibits on which SFMOMA is collaborating with area institutions during the two and a half year renovation of its building. “Closed for construction, yet more open than ever” is the museum’s motto.

SFMOMA “precast its net” on its own collection, and presented CJM curators with a large list of works containing spiritual aspects. The curators selected the works they wanted to include. The exhibit is organized in 10 sections: Genesis, Divine Architecture, The Secret Language, Presence, God in the Abstract, The World To Come, Without End, Master of Time, Hidden and Revealed, and Loss and Redemption.

At the entrance to the Genesis section is “TV Buddha” by Korean American artist Nam June Paik, in which a Buddha sits in front of a television set, locked on a channel featuring the Buddha. The Enlightened One watches himself on TV, an image that almost seems to cannily anticipate the social media era.

Many of the other 50-odd artists in the exhibit are not Jewish, and works in “Beyond Belief” have Native American, Christian, Buddhist and Islamic roots. One standout is Beirut-born artist Mona Hatoum’s “Pin Rug,” a mat inspired by an Islamic prayer rug and composed of stainless steel pins — each nearly 2 inches tall — that point upward. Needless to say, the rug would be an uncomfortable one to kneel on and pray, and the piece is also a risky inclusion for a Jewish museum. (Hatoum, after all, was part of the “Imaginary Coordinates” exhibit in Chicago that the Spertus Museum closed early.)

“The idea that at the Contemporary Jewish Museum, we have a contemporary Palestinian artist while we are looking at issues of spirituality and identity in the 21st century — to have that in the same room as Alberto Giacometti’s ‘Bust of Diego’ and in the same room as an Adolph Gottlieb pictogram,” Leventhal said, “having all of these things communicate with each other, it’s just symphonic.”

The exhibit also features four photos from Alfred Stieglitz’s series “Equivalent” (spanning from 1925 to 1931), which Stieglitz suggested were images of God, and a bronze-and-glass “Lilith” by Kiki Smith, who was influnced by her travels in Israel.

In the secret-language section, the Hebrew (and pseudo-Hebrew) epigraphy is particularly interesting. The inscription in an untitled 1974 sculpture by the California artist Wallace Berman features nonsensical Hebrew “words” on a stone that is surrounded by a metal chain. Viewers can enjoy the calligraphic forms without getting bogged down by the meaning of the incongruous configurations of the letters.

The most interesting work in the show might be a small, untitled Mark Rothko oil-on-paper drawing from 1960 that is just a little more than 14 by 18 inches. The portrait-oriented work recalls Gottlieb’s “Burst” series, with its two cloudlike black forms that look like explosions. Rothko outlined parts of the “bursts” with more controlled ochre strokes. But the bottom of the drawing is the most interesting: Two carefully drawn black forms almost certainly represent the artist’s Hebrew initials, mem resh (M.R.).

It is well known that Rothko attended heder as a child and taught at (and published in the journal of) the Brooklyn Jewish Center. The artist, who was born Marcus Rothkowitz, began using the name Mark Rothko in 1940, but it wasn’t until 1959 that he changed his name legally, according to a CJM wall text. “The motivation behind the change is as enigmatic as his work,” the exhibit text adds. “Various explanations have been offered: An art dealer asked Rothko to change his name; the change signaled a transition in his painting style; the artist decided his name was too cumbersome, too foreign, and that a simpler one would be better for his career.”

If the name change had something to with being less Jewish, perhaps Rothko’s Hebrew signature on a work so soon after adopting the more “American” name signaled at least a little bit of buyer’s remorse.