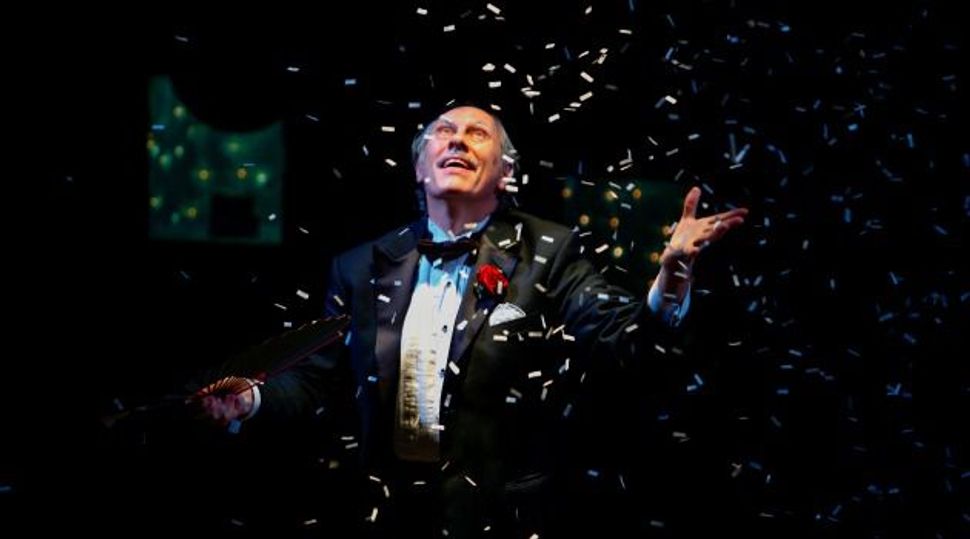 While Jews make up less than 3% of the American population, nearly 20% of American magicians are Jews. There’s David Copperfield, Ricky Jay and David Blaine, the endurance artist who sports several controversial tattoos, including the numbers that were branded on Primo Levi’s arm at Auschwitz.

“Magic involves study and appeals to intellectuals who appreciate book learning and the historical,” says Peter Samelson. “Even though the world today is run by the Internet, a huge library of books on magic exists and you continue to need a master and to find a book or secret text that will teach you. That’s very Jewish.”

Peter Samelson, 64, may not be a household name, but he is a perfect example of a magician whose background informs a multilayered and wholly original onstage aesthetic that is by turns professorial, lyrical and downright childlike.

Samelson, who majored in physics at Stanford University, joined me for lunch in a bustling coffee shop in Manhattan’s garment district. He told me his parents were German-born academics who fled Europe in 1941. “My grandmother was a friend of the Frank family, and Otto Frank stayed with them in Switzerland after the war,” he said.

In an era that afforded few opportunities for Jews desperate to immigrate to the States, the Samelsons gained sponsorship through their cousin Harold K. Hochschild (of Harold K. Hochschild Foundation fame). Samelson’s father, a mathematician, was invited to teach at Princeton’s Institute for Advanced Studies, where he remained before taking teaching posts at an array of universities across the country.

“Because of my European heritage and the loss of family in the war, I had a sense of how life can be shaped by national historical events,” Samelson said. “My parents understood social responsibility and I grew up with the idea that the actions one takes are important. During the Nuremberg trials the standard answer, ‘I was just following orders,’ doesn’t cut it.”

Samelson, who spent most of his youth in Ann Arbor, Mich., believes his convictions emerge from his sense of history and a Jewish sensibility.

“I identify with persecuted minorities living in countries where the government can abuse its power and exploit minorities when in fact they should be defending them,” he said.

The turning point for Samelson came in the 1960s, when he grew increasingly opposed to America’s involvement in the Vietnam War. At the same time he was toying with the idea of a career in in show business.

He was becoming disillusioned with the world of magic as well. It is, after all, based on trickery, and Samelson questioned whether he wanted to be just another deceiver in a universe already awash in deception. 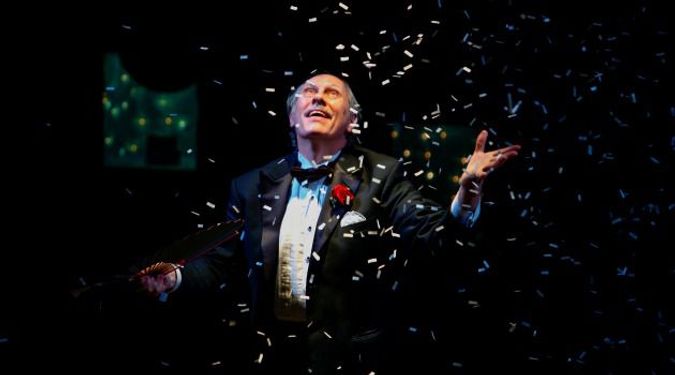 “It wasn’t my goal in life to teach people to enjoy being fooled,” he commented. “I wanted people to understand more about the world, not less. The government was doing a good enough job of it. Magic needed another role.”

For his part, Max Maven, an iconic mentalist and an authority on Jews in magic, maintains that Jews celebrate intellectual achievement and as such have been traditionally drawn to magic along with stand-up comedy.

“And mentalism is even more intellectual,” he said, noting that here too Jews are major players. Noted Jewish mentalists include Marc Salem and the Israeli-born Uri Geller, an alleged master of telekinetic spoon-bending.

But the primary reason for the large number of Jews in magic (at least historically) was plain old opportunity, which did not exist for Jews in other fields, Maven says. Well-known Jewish magicians existed as far back as the 1700s, but didn’t really come into their own until the mid-to-late-19th century. Aside from Houdini, prominent Jewish magicians of the past included Horace Goldin (a stage illusionist who worked at lightening speed); Alexander Herrmann (who perfected the comic satanic look on stage); Nate Leipzig (a vaudevillian and pioneer in minimalist magic); Emil Jarrow (a headliner in vaudeville whose signature piece involved dollar bills disappearing into lemons), and Tobias Bamberg (who created the much-copied Japanese persona “Okito” as his onstage alter ego).

Despite the variety, Jewish magicians have been unified by their sense of themselves as outsiders, which is not unlike the sensibility they brought to comedy and literature, says Maven. “They admired verbal skills and incorporated wit and an arch sense of humor into their magic and that still exists. They made speaking throughout their acts commonplace among all magicians,” he said.

To what extent Jews feel like outsiders today is debatable and largely depends on their upbringing, past experiences and where they live. Still, most of the magicians I’ve spoken with see themselves as the cultural heirs of earlier Jewish magicians — including even Houdini, whose ability to escape unspeakable restraints is not the exclusive delight of Jews.

“Did it play well to Jews?” Maven asked. “Sure. Did it appeal even more to Jews because he himself was Jewish? No doubt. But I don’t think there’s an aesthetic connection between Houdini and Jewish magicians today. Still, he showed that Jews could be physical, visceral and take off their clothes in front of an audience. In some ways he was the Sandy Koufax of magic.”

He was also a rationalist and a skeptic, and he disbelieved in paranormal phenomena in general and séances in particular, which were popular in his time. For the brainy sleight-of-hand star Jamy Ian Swiss, that intellectualism makes Houdini a defining figure for Jewish magicians whose performance does not extol fakery and instead promotes a world view rooted in science. Swiss, a founding member of the National Capital Area Skeptics and The New York City Skeptics, contends that Jews are “raised to be the best atheists.”

Michael Chaut, a founding producer of Monday Night Magic, a club in the West Village, says he is only in part a Houdini heir. “Houdini was all about ‘Look at me, Look how great I am!’ When my act is good, it’s not about me at all. It’s about them, the audience.” And, indeed, when Chaut played emcee the night I attended Monday Night Magic, he was every bit the suave and ingratiating host with just a touch of the self-acknowledged con artist, making all of us feel we were in on an “in” joke.

Most of the magicians I spoke to were born to liberal Jewish parents who encouraged an interest in magic. None came from magician dynasties, but for some, performance is in their blood.

Coin magician David Roth is the son of Yiddish actress Flora Freiman and the grandson of Yiddish playwright Louis Freiman, both of whom worked in Jewish theater on the Lower East Side.

Tanya Solomon, a zany magician right out of New Vaudeville, credits her cantor father for unwittingly teaching her the joy of performance and how to connect with an audience. “There was immediacy to his communication and no fourth wall,” she said. “It was like living with an actor. I had no formal stage experience, but my father always put me up on the bimah with the choir. Performing was part of my life. Many performers are the children of cantors, like the character in ‘The Jazz Singer.’”

One of the more striking performers I’ve met is Harrison Greenbaum who acknowledges his father and especially his grandfather’s brand of humor in forging his persona. But he also pays tribute to the borscht belt. Occasionally, his commentary appeals to stereotypes, but it can also boast a contemporary edge. “My girlfriend wants me to be more like Jesus,” he quips in his act. “I’m a slightly effeminate Jew who does magic. How much closer can I get?”

Jewish self-consciousness is “part of my cultural DNA,” he said.

Back at the coffee shop the lunchtime crowd is thinning as Samelson gazes into that proverbial crystal ball, wondering about the future of magic. He says ageism exists in the industry and the title of elder statesman does not carry the cachet it once did.

In addition, the Internet has replaced the brick-and-mortar magic stores where magicians traditionally met to buy props, work out and share trade secrets. The magician’s life has become an increasingly isolated one, and experienced performers face no shortage of tech-savvy young competitors.

“My challenge is to keep current and keep my skill at a high level, but not lose that connection between my performance and the audience,” he said. “We have that ‘conversation’ through the performance of magic.”

Simi Horwitz writes frequently about show business for the Forward.