How Dogs Went From Feared Enemy to Jew’s Best Friend 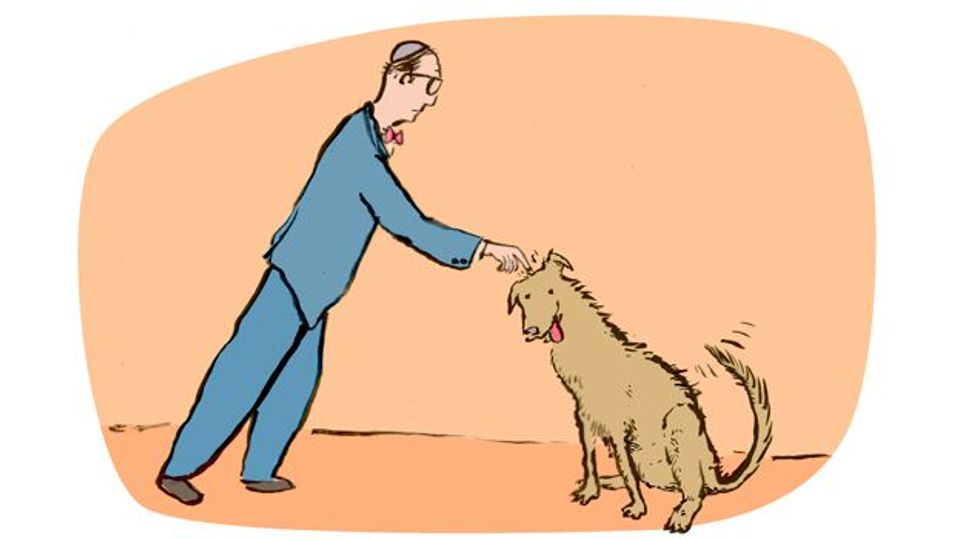 These and other Yiddish proverbs may be seen as objectionable today, but all reflect the complex and contradictory relationship between dogs and Jews. In the introduction to “A Jew’s Best Friend?: The Image of the Dog Throughout Jewish History,” a collection of essays, editors Phillip Ackerman-Lieberman and Rakefet Zalashik both admit to being dog lovers. But this does not lessen their scholarly objectivity.

SEND US FAMILY PHOTOS OR VIDEOS OF YOUR JEWISH POOCH AT [email protected]. WE’LL FEATURE OUR FAVORITES ON THE FORWARD’S SITE.

Unlike the authors of such popular spoofs as “Yiddish for Dogs: Chutzpah, Feh!, Kibbitz, and More: Every Word Your Canine Needs to Know” or “How to Raise a Jewish Dog”. Ackerman-Lieberman and Zalashik follow the sobering precedent of Rabbi Judah Elijah Schochet’s “Animal Life in Jewish Tradition” and Kenneth Stow’s “Jewish Dogs: An Image and Its Interpreters”, which offered litanies of negative images of Jews and dogs (and Jews as dogs) in scripture and the Middle Ages. As Rabbi Schochet explained, in ancient times dogs were excoriated for their noise (Psalms 59:7-14), greed (Isaiah 56:11), stupidity (Isaiah 56:10) and lack of hygiene (Proverbs 26:11). Calling a person a dog was an established insult (I Kings 22:38) and may have even been a slang term for male prostitutes (Deuteronomy 23:19).

In “A Jew’s Best Friend?” essayist Sophia Menache of the University of Haifa notes that in biblical times, wild and sometimes rabid dogs caused “widespread fear.” Menache quotes from the Babylonian Talmud, which offers advice about how to identify a mad dog: “Its mouth is open, its saliva dripping, its ears flap, its tail is hanging between its thighs, it walks on the edge of the road.” If such a canine merely brushes against anyone, the Talmud continues, he should “strip off his clothes and bury them for twelve months of a year. Then he should take them out and burn them in an oven, and scatter the ashes.”

Yet Joshua Schwartz, who teaches at Bar-Ilan University, notes in another chapter that Terumot, a tractate of the Mishnah and the Jerusalem Talmud, depicts dogs as domestic protectors. In one tale, a dog is given an honorary place next to a visiting sage, who asks his host to explain. The latter says, “My master, I am repaying [the dog] for his goodness. Kidnappers came to the town, one of them came and wanted to take my wife, and the dog ate his testicles.”

This vignette does not imply that all dogs in ancient Judea were seen as avenging heroes. As Robert Rothstein of the University of Massachusetts, Amherst, observes in a chapter about dogs in Yiddish proverbs, “kelev,” the Hebrew word for dog, became such a common, everyday insult that it inspired ingenious variations in Yiddish. One such was to call someone a “fifty-second” (‘Er iz a tsvey-un-fuftsiker’) — from the sum of the numerical values of the Hebrew letters in ‘kelev,’ 40 + 10 + 2.

“Dogs were part of the Jewish environment in Eastern Europe, but they were not part of the family,” says Rothstein.

This estrangement is further documented in “Journey to a 19th Century Shtetl: The Memoirs of Yekhezkel Kotik,” originally published in Warsaw in 1913, which recounts how rich goyim used dogs to terrify Jews in the Polish shtetl of Kamieniec Litewski, in today’s Belarus:

“As was fashionable at that time, the estate-owners were fond of dogs. Each squire had different sorts of dogs… At first the squire sent out several dogs of the barking but not biting kind. They were soon followed by the other kind and finally came the real ‘biters.’ The whole pack fell upon the Jew, not letting him budge from the spot; at the same time he received a considerable portion of bites. While the cries of the Jew rent the air and he was frightened to death, the squire with all his family was standing on the porch and laughing heartily.”

This association of dogs with life-threatening experiences added further trauma when anti-Semitic persecutors likened Jews to dogs. From the early Middle Ages, according to the cultural historian Sander L. Gilman, the “demonization” by other religions of “the Jews as dogs remains constant across time.” The human rights advocate Bernie Farber, former chief executive officer of the Canadian Jewish Congress, has recalled that “on Toronto’s beaches up to the mid 1950s, it was common to see signs that read ‘No Dogs or Jews Allowed.’”

Nor was the situation improved when Jews themselves called each other dogs. According to the YIVO Encyclopedia, “one of the most offensive insults in Yiddish is ‘du bist a hunt mit di oyern’ (you are a dog with ears).” Being attacked by dogs and simultaneously identified as a dog helped create a conflicted relationship between Jews and man’s best friend.

Nobel Prize winner Shmuel Yosef Agnon’s powerful “Only Yesterday” presents the cautionary tale of Isaac Kumer, who arrives in Palestine as part of the Second Aliyah, finds a stray mongrel named Balak, and paints the words “mad dog” on its side; Balak fulfils these words by going mad and biting Kumer to death.

Fortunately, the relationship between dogs and their Jews improved, if too late for poor Kumer. An essay by Zalashik in “A Jew’s Best Friend?” posits as a path-breaking moment in Jewish-canine relations the 1969 publication of “Azit the Canine Paratrooper” by Lieutenant General Mordechai Gur, former chief of staff of the IDF.

Azit was a female German shepherd who later inspired a board game, a play and a film with her courage, which Gur describes as much superior to that of the Hollywood film star Lassie. After all, Lassie met “good and bad people,” but Azit had “the terrorists and the Jordanian army chasing after her!”

Azit surrounded by enemies was a metaphor for Israel’s geographic position in the Middle East. Although Gur did not specify any such intention, to choose a German shepherd dog as protagonist was significant at a time when “for Israelis, German shepherds would have called to mind images of the Nazis and the Holocaust … Gur’s choice of the German shepherd may have been designed to turn the German shepherd from a Nazi dog into an Israeli dog.”

By co-opting the canine image and transforming it, Gur achieved what had taken centuries of Jewish history to do: changed Jews’ image of dogs from feared enemies to admired friends.

How Dogs Went From Feared Enemy to Jew’s Best Friend