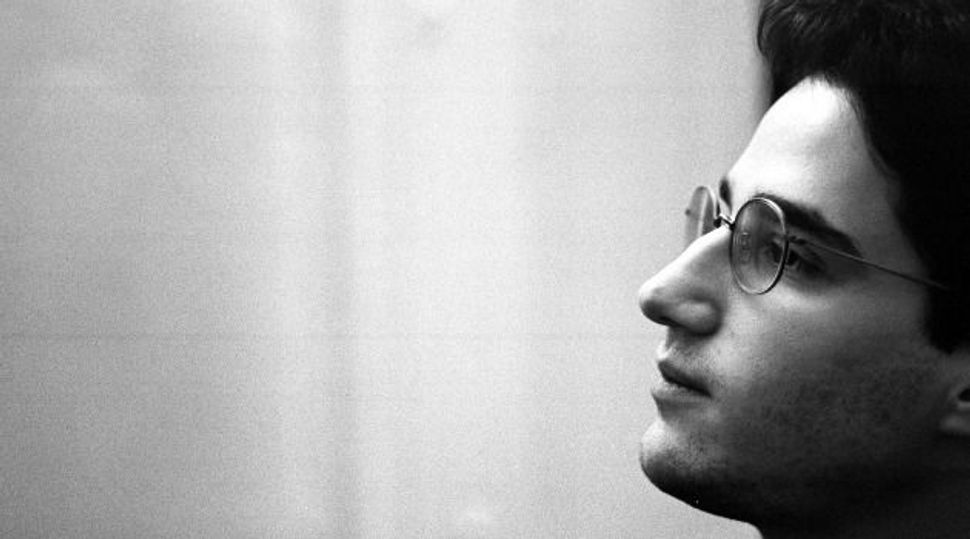 Klezmer Elegy: Harris J. Wulfson, a klezmer musician, threw himself in front of a New York City train in 2008. HIs suicide forms the basis of Sarah Manguso?s mournful memoir. Image by flickr

American Jewish author Sarah Manguso’s “The Guardians: An Elegy” is a strip map of a memoir about Manguso’s grief at the suicide of a close friend, a klezmer musician who suffered from recurring psychosis. Lean, elliptical and beautifully written, her book, recently released in paperback, warrants a second look, as it shows the pinpoint manifestations of personal grief — even as it leaves maddening swathes of Manguso and her friend’s biographies unexplored.

The book takes its title from — to the author’s mind — the negligent staff on the locked psychiatric ward at the New York City hospital where her friend, Harris J. Wulfson, 33, was a patient. Hours after being let out, he threw himself under a subway train. Manguso, 39, indicts herself, too, as a player in Wulfson’s fate, but in a way that is less articulated. Still, her guilt allows her to ally herself with a cadre of intimates and others who have, over the course of her life, killed themselves.

Her circle makes for macabre company, and an unfortunate “Me, too” tenor marks this book. Sometime after Wulfson’s death, a poet, whom Manguso slightly knew, put a shotgun in his mouth and pulled the trigger. “Afterward,” she writes, “I felt an echo of that old feeling — that the line was moving, that I was now one death closer to the threshold — but it was a faint echo. I’ve felt insulated from my death since I began taking this new medicine. I am no longer moved to write poetry, but I traded poetry for a longer life. I knew I was doing it.”

Her moribund statement won’t make sense to those new to her work. But fans of Manguso, who in 2007 won the Joseph Brodsky Rome Prize, already know her backstory. While missing from this memoir, it’s supplied in her earlier work, which includes two poetry collections, “The Captain Lands in Paradise” (2002) and “Siste Viator” (2006). Following them is the microfiction series “Hard To Admit and Harder To Escape” (2007), as well as her debut memoir, “The Two Kinds of Decay” (2008), an exploration of her dealing with depression and a diagnosis with a rare and serious autoimmune disorder in her 20s.

Given Manguso’s history, a compassionate reader might ask, doesn’t it make sense that she can sound both acquisitive and overly expert about death, even as she writes so movingly about it?

Perhaps. But reading too much of her own experience into Wulfson’s weakens her logic. Given her individual reaction to prescribed drugs, including antipsychotics, Manguso seems to think she knows something definitive about their side effects. As a result, she’s preoccupied by her armchair diagnosis that drug-related akathisia, or uncontrollable restlessness, made Wulfson jump to his death.

She explains: “For the last four months of the four years I spent on olanzapine,” an antipsychotic used to treat both schizophrenia and acute bipolar mania, “whenever I lied or said anything even slightly insincere, my right shoulder jerked up and my head jerked down to meet it.”

A pill that functions like truth serum might not seem so bad to the average reader. But to Manguso, her experience represents a wrong she somehow perceives as having been perpetrated against Wulfson. “Clinicians write that akathisia contributes to impulsive acts of violence and suicide,” she declares, without any evidence that Wulfson suffered from it. From there she goes on to wonder why his prescribing doctors — and hospital staff — didn’t foresee his leap onto the train tracks.

At points, Manguso achieves a less autobiographical sense of her friend’s reality: “I know it was probably a group of people at the ward’s front desk, not a single person on duty when Harris left, but it feels very good to focus my attention on some imaginary wicked, murdering angel,” she writes, her prose at once insightful, exquisite and vengeful.

Of Wulfson, who’d never before attempted suicide, she admits that “he talked his way out.” Such acknowledgment is notable, because Manguso rarely assigns personal agency to Wulfson, especially when it comes to his use of recreational drugs. Instead, for the most part she refers to them as an ambient presence in the Downtown Manhattan loft she once shared with him and others.

She doesn’t implicate herself directly, either, noting only in the third person that in post-9/11 New York, “it was easy to find someone to go to bed with, do drugs with.” Such adolescent brio isn’t rare in a young person’s memoir. Still, it makes it hard not to wonder what role Manguso and Wulfson played in feeding their respective illnesses.

Frustratingly, the author never tells us basic facts about Wulfson and his mental health: Was there a genetic component to his madness? What led to two of his three psychotic breaks? (The first involved recreational drug use.) Finally, what — up until the point of his suicide — helped him recover?

Manguso may not know. But to be sure, her evasive yet heartfelt book looks askance at both free choice and understanding. “When a poet ends her life,” she writes of Rachel Wetzsteon, who, in 2009, while she was the poetry editor of The New Republic, killed herself, “ghouls send lines of the dead woman’s poems back and forth all day.” But isn’t it fair to want to know what drives a person toward oblivion?

Certainly, the question preoccupies Manguso. Yet the idea of exerting will in the face of mental illness seems anathema to her, and leads to some of her more bizarre conclusions. “I believe that a dybbuk killed Harris,” she writes at one point.

It’s an odd statement from a woman who mentions her own Jewishness only twice. But the thought that a demon infiltrated her friend appears more palatable than that Wulfson dove to his end.

Manguso’s grief is palpable, and gorgeously rendered. But the sheer number of fallen assembled here undercuts her argument of insanity — unless her definition swells to include all those maddened by the gap between their desires and life.

Susan Comninos is a frequent contributor to the Forward. Her journalism has recently appeared in The Boston Globe and The Christian Science Monitor.