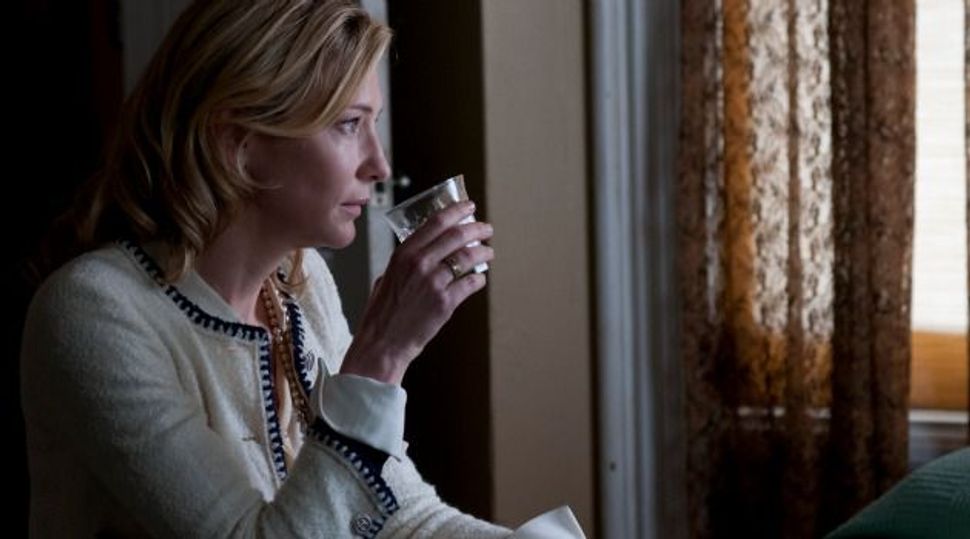 “Do not gloat when your enemy falls; when they stumble, do not let your heart rejoice” (Proverbs, 24:17). That was easy for Solomon to say; it’s harder when your enemy is the ex-wife of a white-collar criminal who did plenty of rejoicing herself while living high on the ill-gotten hog. Who wouldn’t want to laugh in her face a little when life comes crashing down around her pretty little ears?

In his latest film, “Blue Jasmine,” Woody Allen kills that impulse entirely. Allen isn’t sermonizing, however, or being didactic or facetious in any way. It’s Cate Blanchett who imparts the lesson through a brilliant performance as Jasmine, a character who teeters on the edge of sanity throughout the entire film.

The plot bears a superficial resemblance to the Bernard Madoff scandal, but it could be the story of any financial swindler brought low. Alec Baldwin plays Hal, an executive of companies with names like “Empire Solutions” and “Global Innovations.” After he’s arrested — humiliatingly, on the street — his son Danny (Alden Ehrenreich) drops out of Harvard and his wife, Jasmine, has a full-on mental collapse.

When the movie opens, we see Jasmine leaving New York on a plane to San Francisco, where she is going to stay with her sister, Ginger (Sally Hawkins). Though she’s no longer a resident of a padded room, Jasmine has developed the habit of talking to strangers — or to herself, in the presence of strangers — rehashing old arguments and reliving scenes from the past. After the plane lands, we hear the woman next to her say how Jasmine “couldn’t stop babbling about her life.”

Naturally, things get worse. Allen has made a career playing on the pretensions of intellectuals, celebrities and the wealthy, and there’s nothing better to ridicule the superficiality of a trophy wife than forcing her to live in a small apartment with her working-class sister. Not only does she have to share a bathroom, but she also has to drink her vodka martinis from a mug.

Still grimmer, though Jasmine hasn’t shed the habit of flying first class, she is broke and needs a job. In New York she was forced to sell shoes on Madison Avenue to women she once hosted for dinner. In San Francisco she gets a position as the receptionist for a creepy dentist named Dr. Flicker (Michael Stuhlbarg), who hits on her to the point of assault.

Despite Jasmine’s suffering, she is not a sympathetic character. In fact, she is as spoiled, ungrateful, duplicitous, dishonest and entitled as everyone says she is. The movie is not a comedy, but Jasmine’s discomfort makes for scenes of black humor. (Her dislike of Ginger’s uncouth boyfriend — who says things like, “Nurses are very hot to go to bed with because they have extensive knowledge of how the human body works” — is particularly amusing.) Yet Blanchett’s performance makes us feel for her anyway. No matter how much we dislike Jasmine, watching her cling to the last shreds of sanity isn’t a pretty sight. 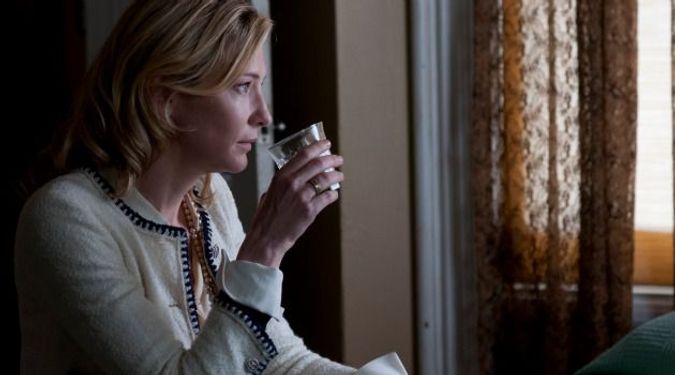 While the film alludes to the scandals of the 2008 recession, it also echoes the plot and characters of Tennessee Williams’s “A Streetcar Named Desire” and its 1951 film adaptation by Elia Kazan. This is not totally surprising: Allen has knowingly mimicked other films before, as with his homage to Federico Fellini’s “8 1/2” in the 1980 movie “Stardust Memories,” and he has referenced “Streetcar” in works like “Sleeper” (1973) and his 1975 play, “God.” In 2009, not long after the Madoff scandal broke, Blanchett also appeared in a production of “Streetcar” at the Brooklyn Academy of Music. In this case, the model plays to Allen’s strengths as a storyteller.

“Blue Jasmine” alternates between scenes from the past, set in New York and in the Hamptons, and the present, in San Francisco. But its focus is always on relationships between characters, rather than on the crimes that brought everyone to this sorry pass. There might be a “Bonfire of the Vanities” element in the spectacle of Hal, a “Master of the Universe” come undone, but it’s relatively minor.

Instead we get the mess of interlocking relationships that characterize Allen’s movies. There’s Hal and Jasmine; Jasmine and a beau named Dwight (Peter Sarsgaard); Jasmine and her various suitors (Dr. Flicker; a mechanic named Eddie, played by Max Casella); Ginger and her first husband, Augie (played by a surprisingly grounded Andrew Dice Clay); Ginger and her current boyfriend, Chili (Bobby Cannavale, the Marlon Brando character according to the “Streetcar” equation), and Ginger and a philandering sound engineer named Al (Louis C.K.). All this fills out the film with a succession of busy, talky scenes set against the bright San Francisco landscape.

The focus on romance, however, rather than on financial chicanery, makes the movie a little off-balance. Though Jasmine and Hal aren’t exactly lionized, the focus might have tilted more toward the little people. After getting ripped off by Hal, Augie’s marriage to Ginger falls apart and he is forced to seek work on an oil pipeline in Alaska. Yet his part of the story is given scant attention. No one would call this a “feel good” film, but maybe it should have felt a little worse.

Still, you have to admire Allen’s willful disregard for the pathetic fallacy in his portrayal of Jasmine. Unlike “Streetcar,” which takes place in the twilit French Quarter of New Orleans, Jasmine’s collapse happens in full daylight, amid parties and get-togethers, dates and conversations, and all the entanglements of an active life.

This is no quiet, solemn collapse — this is what happens when a person doesn’t fit into the world anymore and can no longer sham, dissemble or deceive. As Jasmine says in one of her unhinged speeches, “There’s only so many traumas a person can withstand before they run out to the street and start screaming.” It may be deserved, but it’s hardly an occasion to rejoice.