It’s Jews vs. Jaws This Month on the Discovery Channel 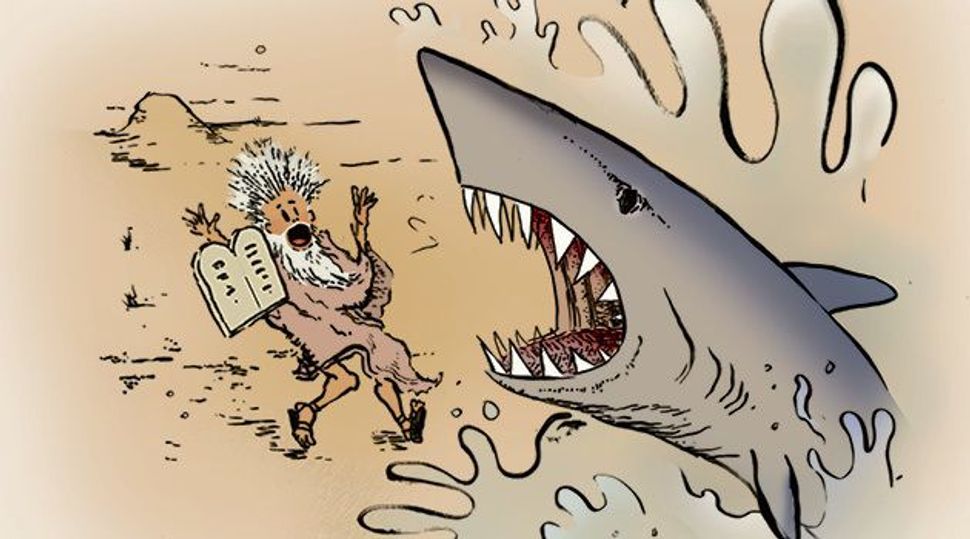 Shark, Swallow You Whole: The Jewish fascination with sharks goes all the way back to Jonah. Image by Kurt Hoffman

Sunday, August 4, marks the beginning of an important week for all lovers of our finned, fanged friends from the deep: Discovery Channel’s annual Shark Week. At 25 years and counting, Shark Week is this country’s longest-running cable programming event. But many might not realize that there’s a Jewish connection to this summer phenomenon, and to the creatures that inspired it.

The Jewish fascination with sharks goes all the way back to Jonah. After all, the Hebrew term for the beast that swallowed Jonah is a “great fish,” which makes a great white shark a biologically accurate candidate, more so than a whale, which is not a fish at all, but a mammal. There’s no shortage of sharks in the Mediterranean — just this past June, Shark Year Magazine reported on a great white spotting off the coast of Turkey — and if we can suspend disbelief that the reluctant prophet could endure for three days in the belly of the fish, then why not also have faith that Jonah could survive a journey through the shark’s five rows of razor-sharp teeth without a scratch?

Sharks don’t merit much attention in rabbinic literature, except to determine that they are not kosher to eat. (And we call them predators?) Still, in the middle of a talmudic discussion of nautical matters found in tractate Bava Batra (73–74), we see a section where the rabbis share a series of what can be described only as “fish tales.” One in particular stands out:

“Rabbi Yochanan related: Once we were traveling on board a ship and we saw a fish that raised its head out of the sea. Its eyes were like two moons, and water streamed from its two nostrils as from the two rivers of Sura.”

Sounds like a vision straight out of the old Universal Studios tour! Rabbi Yochanan continues:

“Once we were traveling on board a ship and we saw in the ocean a chest set with precious stones and pearls which was guarded by a shark. A diver went down to retrieve the chest, but the shark noticed him and was about to wrench his thigh. Quickly, the diver poured a bottle of vinegar on it and the shark sank into the sea.”

Steven Spielberg himself couldn’t have told it any better. Speaking of Spielberg, the Jewish filmmaker’s 1975 adaptation of Peter Benchley’s novel “Jaws” not only inaugurated the era of the summer blockbuster, but also helped spawn our society’s ongoing fascination with all things shark related. Jewish actor Richard Dreyfuss whom Spielberg has referred to as his “alter ego,” played Matt Hooper, whose passion for knowledge and willingness to question the status quo guide his journey through the terror of the hunt.

A little more than a decade after “Jaws,” another Jew decided to challenge the status quo, and for the past 25 years summer television has not been the same. Steve Cheskin grew up in Buffalo, N.Y., where his mother Fay Cheskin, served as “hospitality chairman” of the local branch of the National Council of Jewish Women. In 1987, Cheskin was a top executive at the fledgling Discovery Channel network, as Discovery founder John Hendricks related in an interview last summer:

“I remember how it all came about. It was 1987, only 24 months after I launched the organization. We got together at a hotel in Washington, D.C. We were brainstorming, and no idea was a bad idea…. Steve Cheskin raised his hand and said, “You know how those independent stations have themed movie weeks? What if we had a shark week?’”

The other execs knew a good idea when they heard one, and the rest is television history. The first Shark Week aired in July 1988 and has drawn more than 20 million viewers on average in the ensuing 25 years.

When it comes to sharks, most of us focus on their ferocious, often fearsome appetites. Yet one of the most poignant depictions of a shark came at the hands of an 11-year-old Israeli boy, Gilad Shalit. Years before his tragic kidnapping, Shalit wrote of a fish and a shark — two natural enemies — that learn to coexist peacefully in the same ocean. As the shark says in the closing lines of the story, which Shalit wrote for his 5th grade class, “You are my enemy, but maybe we can make peace?”

The first week of August is not only Shark Week, but also the beginning of Elul, the month preceding the High Holy Days, when we begin the difficult work of repairing our bond with God and with each other. In “Annie Hall,” released not long after “Jaws,” Woody Allen’s character, Alvy Singer, famously opines: “A relationship, I think, is like a shark. You know? It has to constantly move forward or it dies.” In the end, perhaps every Jew from Woody Allen to Gilad Shalit to Jonah uses the shark to offer us the same teaching: There’s no running away from the relationships that need our attention. We don’t “need a bigger boat”; we need bigger hearts.

Eric Schulmiller has served as cantor of the Reconstructionist Synagogue of the North Shore (Long Island) for the past 14 years.

It’s Jews vs. Jaws This Month on the Discovery Channel