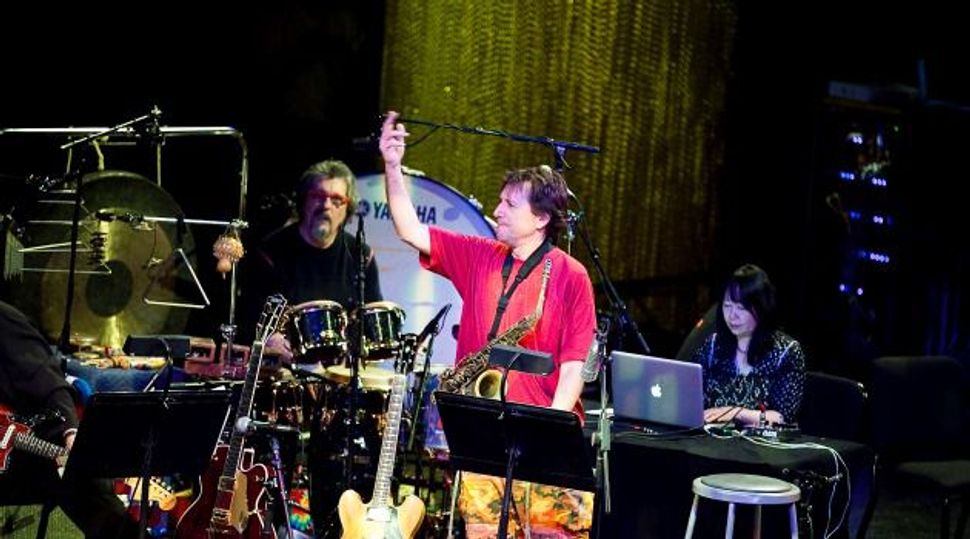 Zorn in the USA: At 60, John Zorn remains an influential voice in avant-garde music. Image by Heather O'Brien

John Zorn’s East Village apartment is like his music: an exceptionally-concentrated, perfectl- composed space celebrating the artistic experience. Thousands of records and tapes and CDs and books, well-ordered, each tug at the visitor’s elbow for attention.

For many years, John Zorn — composer, performer, arranger, independent music distributor — has been a major voice in the musical avant-garde in America. Zorn, who recently celebrated his 60th birthday and lately has been performing in tributes to his career, has had a powerful and profound impact on contemporary music, particularly in the expression of the Jewish experience through music.

“A family member once told me that I am related to Maimonides, and in a metaphoric sense that’s true,” said Zorn. “We are in the midst of a Jewish cultural renaissance in this country; we are enjoying the greatest time since Maimonides — in fact, this is another era of‘ Maimonides.

What unites us? Whatever else is going on — and there is lots of tension and conflict in the community — we are united in the business of celebrating Jewish creativity. Jewish creativity today has a lot of depth and power and meaning because of all the dreck and schreck that we had to go through to get to where we are today.

“How do I come to my Jewishness? I was raised in a completely secular environment; it was an environment of total alienation and denial when it came to matters Jewish. My parents were brutal when it came to eliminating the past. I came to Jewishness by walking down very different paths. Some of this fertilization happened through my association with many musicians I worked with who were Jewish. But in large measure my experiences in Japan over 10 years, where I was the ‘outsider.’ I couldn’t ‘pass’ as Japanese. I was a Tokyo musician, but I was not accepted; at best I was tolerated. I was the ‘Other.’”

“My experiences as ‘outsider’ in Japan gave new meaning to my experience as a Jew. I learned that I am proud that I am a Jew — and not for the negative reasons of being an ‘outsider.’ Why would a Jew want to identify as a Jew unless there were positive values? It’s not enough in the post-Holocaust world just to cry ‘Holocaust!’”

As for the question of Jewish musicians being outsiders, Zorn said, “The Jewish experience has been the ‘outsider’ experience — we have always been that, in every society. The musician — especially the musician working in new areas — is also an ‘outsider.’ Combine the ‘Jewish as outsider’ with the ‘musician as outsider’ and you get the ultimate ‘outside’ experience. This has been my burden — and my blessing.”

“The fact that I have finally been recognized by the Jewish community [in 2001 Zorn received the National Foundation for Jewish Culture’s Jewish Cultural Achievement Award in Performing Arts] was a very important step, and not because of the acknowledging of a serious musician who is making a contribution, but as sending a message to the ‘insider’ community about those on the ‘outside’ — the Jew and the musician — who represent the creative riches in the community that the community doesn’t know about and needs to know about.

“There are many gateways into the Jewish experience. As a creative artist, I say that it is about process — the process of creating something that resonates Jewishly. The necessity of being able to recite the Torah forward and backward is not necessary for the work of creative artists. For me it’s about the process and about learning and questioning along the way. To play with Jewish scales and modes in new ways, to compose about Kristallnacht, to ask the question of what is — and what isn’t — Jewish music: These are the resonances that work for me, and for other musicians who are working in the Jewish experience.

“What’s interesting to me about the future of the Jewish community is that anything can happen. We are always changing, and yet always rooted. Some roots are not as deep as others, but the flowers are just as beautiful, and their aromas are as sweet — only different. No one flower is better than the other. Embrace all the aspects of Judaism — that’s what I try to do in my art.

“I don’t want to get mystical, but you have to have some sort of messianic belief in yourself, in your Jewishness, for your music to work. One of the beauties of Jewish thought is abstraction. What is Jewish music? It’s the same as ‘What is Jewishness’? It’s a concrete, yet very abstract, question. Many answers, and I believe in every one of the answers. The analysis is ultimately sterile; the answer is someplace else, in the question itself.”