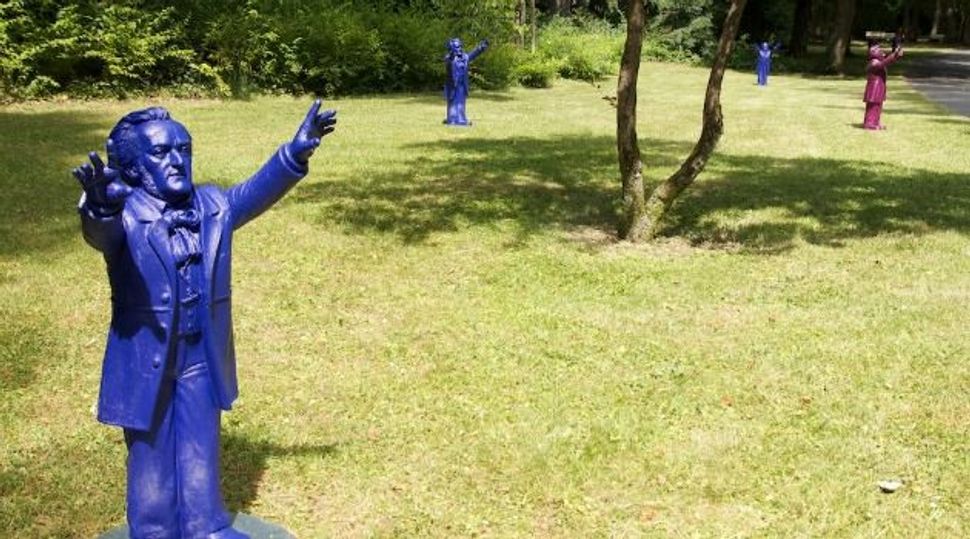 On the occasion of the Bayreuth Festival the Grüner Hügel, or Green Hill, that is home to the Richard-Wagner-Festspielhaus was littered with 500 multicolored “mini-Wagners” — garden-gnomelike figurines of the composer, hands raised as if ready to conduct. These cute statuettes share the hill with an outdoor exhibition, “Silenced Voices,” honoring 53 Jewish singers, musicians and conductors who performed at the festival before World War II. One of the earliest was conductor Hermann Levi, who led the premiere of “Parsifal,” Wagner’s final, mystical opera, in 1882. To the left and right of the massive bust of Wagner, designed by Arno Breker, Hitler’s favorite sculptor, are the biographies of Bayreuth musicians who perished in the Holocaust. At the top of the hill is the Bayreuther Festspielhaus, the opera house designed by the composer himself both as the perfect performance venue for his operas and as a den of worship for his most ardent admirers.

For much of the festival’s history, the spirit of levity coupled with introspection evidenced by the Wagner-gnomes and the “Silenced Voices” exhibition would have been unthinkable. This mixture of irreverence about the cult of Wagner, alongside the sobriety of the festival and the role it played during the Third Reich speaks volumes about the character of the modern-day festival, which opened on July 25 with a performance of “Der Fliegende Holländer” (“The Flying Dutchman”).

Bayreuth is still the most exclusive and prestigious cultural event in Germany, and both Germany’s chancellor, Angela Merkel, and its president, Joachim Gauck, attended the opening of the festival. This year’s installment has been especially momentous because of the composer’s bicentennial. The Wagnerjahr, as it is succinctly called here, is being celebrated throughout the country with a seemingly endless spate of operas, concerts, magazine cover stories and newly published books. Bayreuth’s new production of the “Ring” cycle by the controversial Berlin director Frank Castorf is the undisputed climax of the Germany-wide Wagner-rama.

Wagner’s notorious (and notoriously public) anti-Semitism, coupled with the high-ranking Nazis who held his works in great esteem, has left a deep stain on his reputation and that of his music. To this day, Israel still famously observes an unofficial ban on performing Wagner. But the history of the Bayreuth Festival, run exclusively by members of the Wagner family since its opening in 1876, is far more damning of its reputation than either the composer’s racist beliefs or Hitler’s musical tastes.

Though Wagner built the Festspielhaus as a shrine to himself and his music, the festival embraced reactionary politics well before the Nazis took power in 1933. Unlike many other cultural institutions that operated during the Third Reich, the involvement of the Bayreuth Festival went far beyond merely lending cultural prestige to the regime. In the wake of Hitler’s failed Beer Hall Putsch, the festival became a haven for members of the then-banned Nazi Party and their supporters. The 1924 festival in particular, which General Erich Ludendorff, one of the key players in Hitler’s 1923 putsch, attended as a guest of honor, had the character of a Nazi rally. The festival program that year described Wagner as “The führer of German art.” One could say that Bayreuth supported Hitler long before Hitler supported Bayreuth. Hitler never forgot the Wagner family’s friendship and support, and remained lifelong friends with Winifred — the English-born wife of the composer’s son Siegfried — whom he would visit annually. He would play with the little Wagner children, Wieland and Wolfgang, who called Hitler “Uncle Wolf.”

Wagner’s anti-Semitism and Hitler’s enthusiasm for Wagner are two separate but related issues that make the festival so controversial. Hitler invested Wagner with much of the Nazi ideology that we still associate with his music. The affinity of the festival leadership — starting with Wagner’s vehemently anti-Semitic widow, Cosima Wagner, Franz Liszt’s daughter, who lived until 1930 — to Nazi ideology was a decisive factor that in the words of Thomas Mann turned the festival into Hitler’s “Court Theater.”

This alliance has had damning consequences for both the festival and the reception of Wagner’s music down to the present day. As Stephen Fry explains in the 2010 documentary “Wagner & Me,” “Hitler saw one side of Wagner and we tend to see Hitler’s side of Wagner because Hitler was such a huge figure in the 20th century and because his taste for Wagner was so enormous.”

In the film, Fry, who is Jewish, tries to reconcile his love for Wagner’s music with his discomfort at “how close to the Nazi fantasy world Wagner was, and how deeply stitched into Hitler’s vision of the world.”

After the war, Winifred Wagner, thoroughly unrepentant about her ties to Hitler, was barred from the festival, yet she proudly displayed her Nazi sympathies by appearing in public with old Nazi friends and neo-Nazi politicians. In 1975 she gave a five-hour-long interview to the experimental filmmaker Hans-Jürgen Syberberg in which she spoke candidly about her undiminished fondness for Hitler.

The interview caused a scandal. In the words of the historian Frederic Spotts, her words “were the ventriloquized voice of numberless Germans and Austrians”: the public articulations of what many others still privately thought. At the following year’s festival, the German president, Walter Scheel, strongly denounced such attitudes in his address to the audience. In particular, he condemned the festival administration, “who still thought that Bayreuth was only a place of culture without noticing that it had long since become an instrument for evil policies.”

Nowadays, Bayreuth considers itself as more of a Wagner workshop than a temple to his music. Yet it remains the most prestigious cultural event in Germany, with a notoriously long wait for tickets and a thriving black market for the consistently sold-out performances. While it aims to present opera as something alive and relevant by routinely engaging controversial and cutting-edge directors, the festival remains very sensitive about the taint of its Nazi history.

Last year it weathered a scandal after the revelation that a baritone engaged to sing there had once performed in a heavy metal band with a swastika tattoo on his chest. The singer, Evgeny Nikitin, was slated to sing to title role in “Der Fliegende Holländer” and was summarily dropped from the production.

More recently, Katharina Wagner, who is the composer’s granddaughter and has managed the festival along with her half-sister, Eva Wagner-Pasquier, since 2008, has pledged to hand over the letters that passed among Wolfgang, her father and Hitler. She gave little hope, however, that the “potentially explosive” correspondence between Winifred and Hitler, which are in the possession of another Wagner cousin, would ever see the light of day. Winifred claimed to have no knowledge of the final solution. What is known, however, is that she asked the SS chief in Prague, Karl Frank, for the confiscated property of Czech Jews who had been deported to camps. It is difficult to assess just how transparent the festival truly is. And this year the festival has also maintained a certain amount of secrecy about its new “Ring” cycle.

“Ring,” a monumental tetralogy derived from an ancient Teutonic saga about gods, dwarfs, giants, dragons (and a few mere mortals), is arguably the fullest encapsulation of the composer’s racial and nationalistic ethos. Modern productions, starting with the centenary “Ring” of 1976, directed by Patrice Chéreau, commonly chip away at the myths to challenge Wagner’s assumptions about everything from race and purity to women and power. That production, set during the industrial revolution, was much reviled at its premiere but has since become a rarely rivaled benchmark. In the present day, the best Wagner directors working are those who find ingenious and unexpected ways to confront the problematic aspects of the music, libretti and ideology. Among them is Stefan Herheim, the Norwegian director who contributed the festival’s much praised 2008 production of “Parsifal,” which was stuffed with allusions to Bayreuth’s past (including huge Nazi flags and goose-stepping extras).

Aside from a handpicked group of 10 journalists who were invited to sit in on rehearsals of the first two installments, of the “Ring” cycle, “Das Rheingold” and “Die Walküre,” Frank Castorf’s production has been completely off-limits to members of the press. After being denied access to the planned media preview of “Götterdämmerung,” the cycle’s final, longest and loudest installment, I managed nevertheless to gain admittance to the high-security final dress rehearsal of “Rheingold” on July 18, where ushers scrutinized the 2,000-audience members’ tickets and passports. Castorf, who has led Berlin’s Volksbühne for the past 21 years, has a reputation for being an edgy and occasionally vulgar provocateur. From a distance, his iconoclastic approach to theater seems like a good match to Bayreuth in the 21st century. Nowadays, taking an ax to the sanctity of Wagner’s music dramas is always welcome. Although he canceled all his interviews in the run-up to the festival, Castorf did reveal a few details about his vision for the cycle in an interview with German news sources last year. The juiciest admission was that he would tell “Ring” as a vision of postwar Europe’s scramble for oil in the Middle East.

Based on what I saw, Castorf seems less interested in addressing Wagner’s anti-semitism or dealing with the festival’s dark past than he is in interpreting the “Ring” operas as an highly ironic allegory for American cultural hegemony, “cowboy diplomacy” and western dependency of oil. His “Rheingold,” set in a motel along Route 66 and featuring an unsavory cast of thugs, bimbos and drug-addicts, was occasionally entertaining and humorous, but otherwise puzzling and frankly a trifle boring. Nevertheless, it is invigorating to witness such a desacralizing of Wagner occurring in the very place that served as a shrine to the Holy German Art he claimed to embody.

Walter Scheel, the German president who addressed the 1976 festival, spoke about the importance of the festival as an emblem of both cultural honor and national shame. “Bayreuth’s history is part of German history,” he said. “Its mistakes are the mistakes of our nation. And in this sense Bayreuth has been a national institution in which we are able to recognize ourselves.” Four decades later, those words still ring true.

A.J. Goldmann is a Berlin-based writer and critic.