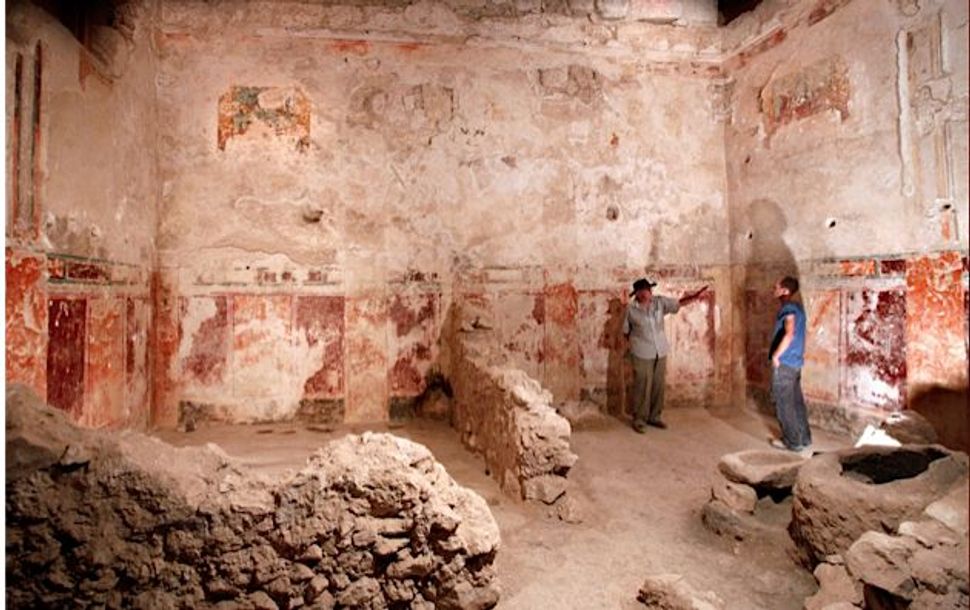 If Walls Could Talk: Professor Ehud Netzer and Roi Porat in the Royal room of the theater at Herodium. Image by Courtesy of israel museum

Rome and Jerusalem, the birthplaces of modern Western civilization, share an infamously bloody history. The destruction of the Second Temple by the Roman general Titus in 70 C.E. effectively excised Jerusalem from the world’s annals for almost 2,000 years, while securing its place in prayer books.

In our collective memory, the two seem eternally at loggerheads. But as a popular new exhibition now on display at Jerusalem’s Israel Museum demonstrates, less than a century prior to the sacking of the city there was room for a thriving, mutually enriching coexistence between the two cities. That the man responsible for this minor miracle was King Herod the Great, one of the region’s most controversial figures and the subject of the exhibition, is but one of the display’s great ironies and pleasures.

“Herod the Great: The King’s Final Journey” just might be Israel’s hottest ticket; it has attracted more than 230,000 visitors since its opening this past February (it is scheduled to close in January 2014). It is definitely Israel’s largest archaeological exhibit ever.

The fact that Herod, who ruled as client King of Judea from 37 to 4 B.C.E. on behalf of his Roman benefactors, left a massive architectural footprint on the Land of Israel, is hardly news for anyone who has ever paid a visit.

His aesthetic legacy lives on in the port and amphitheater at Caesarea in the North, the Masada fortress in the South and especially in the collective memory of Jerusalem’s Second Temple. But it was at Herodium, the most idiosyncratic of his constructions and the only one named for him, that the exhibit was born.

Herodium is a truncated conical hill — off the beaten track for most tourists because of its location, east of the Green Line — where Herod built both a palace and his final resting place. Ehud Netzer, an archaeologist and professor, spent 35 years excavating Herodium in search of the king’s tomb before finally uncovering it in 2007. As one of the exhibit’s curators, Silvia Rozenberg, a longtime colleague and former student of Netzer, told me, the museum had originally planned on displaying only the tomb.

“But we decided we couldn’t show the man’s death without also showing his life,” she said. Herod’s life is conveyed primarily through his construction.

As Netzer wrote in the introduction to the exhibition’ catalog, despite not being an architect himself, Herod “lived and breathed the art of construction, deeply understood its ways, and, quite simply, loved to build. It seems that over the course of his 33 year reign, Herod never once stopped building.”

Visitors to the exhibit first encounter a huge photograph of the desert outside Jericho, a view very similar to the one Herod had from one of his several winter palaces in the city. Herod’s throne room was fully reconstructed for the exhibit, with many of the original opulent frescoes on display. Lab tests have determined that the gorgeous colors did not come cheap and were brought to Judea from Emperor Augustus’s private cinnabar mines in Spain.

Herod died in this room, and visitors are invited to follow his funeral procession en route to Herodium. Much of what is known of Herod stems from the books of Josephus (né Joseph ben Matityahu), the Jewish-turned-Roman historian who documented the era. One of the earliest print editions of his works, circa 1470, is on lavish display, complete with hand drawn, gold-leaf illustrations.

Josephus recounted Herod’s problematic lineage — the son of a Nabatean mother and an Edomite father who had converted to Judaism, Herod wasn’t considered Jewish enough for the Judean elite — and his sometimes murderous actions, as when he ordered the execution of his own wife, Mariamne, along with three of his sons.

The next room focuses on the interior decorations of Herod’s palaces. Its centerpiece is one of Herod’s giant royal bathtubs — made of a chunk of calcite taken from a stalactite cave — that weighs more than a ton. It was unearthed in a bathhouse in Cypros, on a mountain overlooking Jericho. A stone-inlaid opus sectile floor completes the image of a traditional Roman bathhouse miraculously transported into the Judean desert.

The exhibit continues with a section dedicated to Herodian-era buildings in Jerusalem, most notably the Second Temple, which was the largest religious compound in the entire Roman Empire and represented Herod’s attempt to curry favor with the religion that ultimately rejected him despite the fact that he saw it as his birthright.

An Ionic capital from the top of one of the Temple’s columns posed a particular challenge for the museum staff. At three tons, it required breaking ground and strengthening the museum’s foundations to support its weight.

A plaque honoring a Jew from Rhodes who supplied the funds for tiling one of the Temple courtyards serves as a reminder that the art of the shnorrer, so common in these parts, dates back to antiquity.

Some of the exhibition’s most enchanting features, though, are brand new. Screens display aerial footage of modern-day Jericho, Caesarea and Masada, as computer-generated models of Herod’s constructions pop up, superimposed with the terrain. Simple and devoid of texture, they are more architectural mock-ups than Hollywood-style renderings, but when projected alongside the countless historical artifacts, they restore familiar landscapes to their former glory.

A display of jugs re-creates a royal storeroom, full of imports from abroad — garum (a smelly fish sauce), apples, pickled onions and copious amounts of wine. As Rozenberg pointed out, these weren’t just the whims of an epicure; they also served a political purpose, allowing Herod to provide Roman-style royal banquets for official visitors, thereby indicating that the Judean kingdom was firmly part of their world.

And clearly, Herod was a smooth political operator. Securely under the patronage of Mark Antony, Herod’s reign was in danger when Antony fell in love with Cleopatra and out of favor with the Senate, eventually losing the Battle of Actium to Augustus and committing suicide. Instead of hiding, Herod traveled to Rome and pledged allegiance to the new emperor. A juglet of balsam oil, an ancient perfume — liquid still intact, though the fragrance is long gone — is a relic of Antony’s tragedy. The oil was produced in Herod’s fields in the Jordan River Valley, fields that Antony gave Cleopatra as a gift and were restored to Herod only after the Battle of Actium. A two-ton bust of Augustus, found in a shrine at Sebastia, by Nablus, stands watch — headless — from across the hall.

Though Netzer’s quest for Herod’s tomb spanned decades, he never regretted the search. “I am grateful that the tomb was revealed only years later,” he wrote in the exhibit’s catalog, “while we were still digging, unknowingly, alongside and below its remains!” Had it been discovered earlier, entire areas in the magnificent site — a palace with royal quarters and court, an amphitheater — might never have been unearthed.

But while Netzer was eventually triumphant, the discovery’s aftermath was tragic. On October 25, 2010, at Herodium to prepare for the exhibition, Netzer leaned on a shaky railing that gave way. He suffered a 20-foot fall, and died three days later in Jerusalem.

Rozenberg and her colleague, Dudi Mevorah, were left to finish his work. Presciently, years ahead of the catalog’s publication, Netzer had already completed its introduction.

Herod’s tomb site was a tower more than 80 feet tall, with huge columns and a conical roof, halfway up the volcano-shaped hill. The tower was toppled and wrecked during the Jewish revolt (66 –70 C.E.), and three shattered limestone sarcophagi were found in its vicinity. Though unmarked, one had a different color — red — and appeared to have been smashed with particular vengeance.

Now, with the tower’s upper floor reconstructed at the museum, and the sarcophagus painstakingly pieced together, thousands of visitors a day pay their respects to King Herod, master builder, but also, at best, ruthless proto-Machiavellian, and at worst, murderous psychopath (Emperor Augustus was apocryphally quoted saying that “it’s better to be Herod’s pig than his son”). Rozenberg told me that she feels very little ambivalence toward Herod. “

Yes, he was a murderer, but he succeeded in keeping Judea independent, prosperous and peaceful during his 33-year reign, despite those being very tumultuous years for the Roman Empire,” she said. “I’m an archaeologist. I tell stories with stones, and these are incredible stories. Herod’s architecture was world-class. He made a lasting impact on the landscape here and even influenced Rome. There have been many murderous kings, but very few kings, murderous or not, that had his positive impact.”

Tal Kra-Oz is a writer and law student living in Jerusalem.