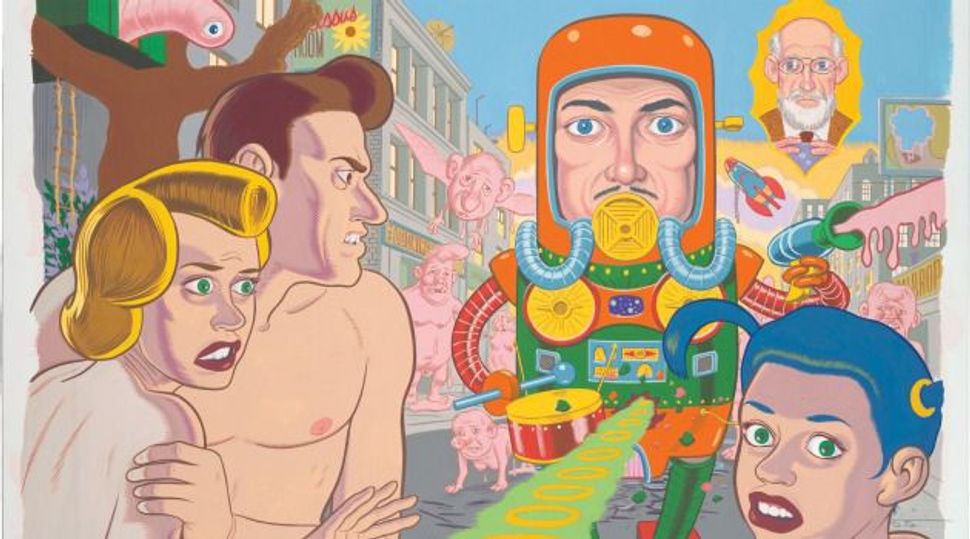 Parental Advisory:Mature Audiences Only? Artwork for the cover of ?Eightball 18.? Image by Daniel Clowes

The Museum of Contemporary Art Chicago’s exhibit “Modern Cartoonist: The Art of Daniel Clowes” (on view through October 13) ought to come with a parental advisory about its explicit content. Although the cover of one of the comic books that hangs in the show — “Eightball” No. 8 (1992) — is recommended “for mature readers,” on both occasions that I visited the exhibit, children thumbed through X-rated comics scattered throughout the show, apparently unbeknown to their parents.

Clowes, best known for his illustrated tale of teenage angst, “Ghost World,” which starred Thora Birch and Scarlett Johansson in the film adaptation, has an eye for the bizarre and the obscene. Many of his strips feature graphic sexual scenes, and Clowes romanticizes the unsightly in his storyline “Ugly Girls,” in which Enid of “Ghost World” makes her debut.

In the pieces at MCA and in Clowes’s larger body of work, Jews and anti-Semitism often hide in plain sight. The name of the “Ghost World” protagonist, Enid Coleslaw, is an anagram for Daniel Clowes, and Enid is Jewish.

She declines a bagel from her friend Rebecca (“Becky”) because the bagel is “too WASPy,” and she shares a joke with Becky: “Whaddya call a Japanese Jew? Sosumi.”

John Ellis, an annoying acquaintance of Enid’s and Becky’s, is anti-Semitic. “Shalom, Enid Cohn!” he greets her at one point, to which she responds, “Sieg Heil!” He later adds: “Listen to the little liberal Jewish girl.… You Jews are such an angry bunch!” Enid assures him: “We Jews are sick of you non-Jews f–king up the world!” Another Clowes work, “Ice Haven,” has quite a few Jewish characters, but as in “Ghost World,” those characters don’t seem to have deep senses of their Jewish identities.

A spokeswoman for MCA said the artist declined to respond to submitted questions about his Jewish identity because of both a lack of time and the demands of other projects. But Clowes, who was born in Chicago in 1961 to a Jewish mother and a lapsed-Episcopalian father, has discussed his religious upbringing in the past. In 1998, he told Jennifer Przybylski of San Francisco’s Metropolitan Museum of Art: “One half of my family were Jewish immigrants who were kind of obnoxious, and the other half was this reserved WASPish Pennsylvania clan. The two girls [Enid and Becky] were a characterization of the two and hence myself.” Despite Enid’s name being an anagram of Clowes’s, the artist told Przybylski that he created two female, rather than male, characters so that they “could not be aligned with me whatsoever.”

In his 2004 book “From the Lower East Side to Hollywood: Jews in American Popular Culture,” Paul Buhle, a professor emeritus at Brown University, compares Clowes’s work to “Seinfeld” in its meditation on states of mind rather than on particular topics, and notes that the “pervasive sense of alienation” in Clowes’s comic books may have become “near-universal themes, but once they belonged strongly or were identified strongly as Jewish themes in the U.S.”

“Here’s where it gets dicey,” Buhle told me in an email. “Would even Clowes think of this as a ‘Jewish Take’? Maybe not. And perhaps I am just guilty of reading too deeply.”

In 2010, Clowes told Gothamist that he deliberately chose the ambiguous name Wilson, which could be a first or last name, for one of his protagonists. “I’m glad I didn’t give him a Jewish name, because I thought about that for a while,” he said. And as Ken Parille, an associate professor of English at East Carolina University, notes in his edited volume, “The Daniel Clowes Reader,” Clowes’s 1996 strip “Gynecology” features “an anti-Semitic caricature of the ‘Worried Jew.’”

“I think the ways in which Clowes’s work is informed by issues of Jewish identity are more a matter of cultural influences than of family history,” Parille said in an interview with the Forward. “While family certainly plays a role, it’s one that’s hard to articulate.”

According to Parille, Clowes is “deeply influenced by a tradition of Jewish cartooning in America,” particularly that of Mad magazine, which had many Jewish cartoonists. “While these cartoonists questioned and satirized all kinds of cultural authority, they never believed that they or their magazine should be exempt from the same kind of intense scrutiny. So Mad repeatedly mocked Mad.” And, Parille notes, those cartoonists worked in the “shadow of the Second World War” and “recognized the looming danger inherent in all authority — even their own.”

Like the Mad artists, Clowes is “intensely satirical” and very self-critical, “in order to avoid establishing himself as an authority, especially on questions of racial, ethnic or religious identity, thus rejecting the kinds of authoritative pronouncements that turn art into a tool of the propagandist,” Parille said.

Although Clowes often writes and draws anti-Semitic dialogue, he is showing its presence in his characters’ lives rather than campaigning about the dangers of anti-Jewish hate speech, says Parille, who views David Goldberg, the victim of the crime at the center of “Ice Haven,” as a larger symbol of alienation.

Goldberg speaks in only the final panel of the cartoon, and his silence “is emblematic of Clowes’s commentary on Jewishness,” Parille said. “It’s never exactly clear what Clowes has to say about questions of Jewish identity and about the relationships between Jews and non-Jews. Like David Goldberg, the cartoonist doesn’t offer much, leaving the answers solely up to readers.”