Searching For Jews in British Children’s Literature Beyond the Stereotypes 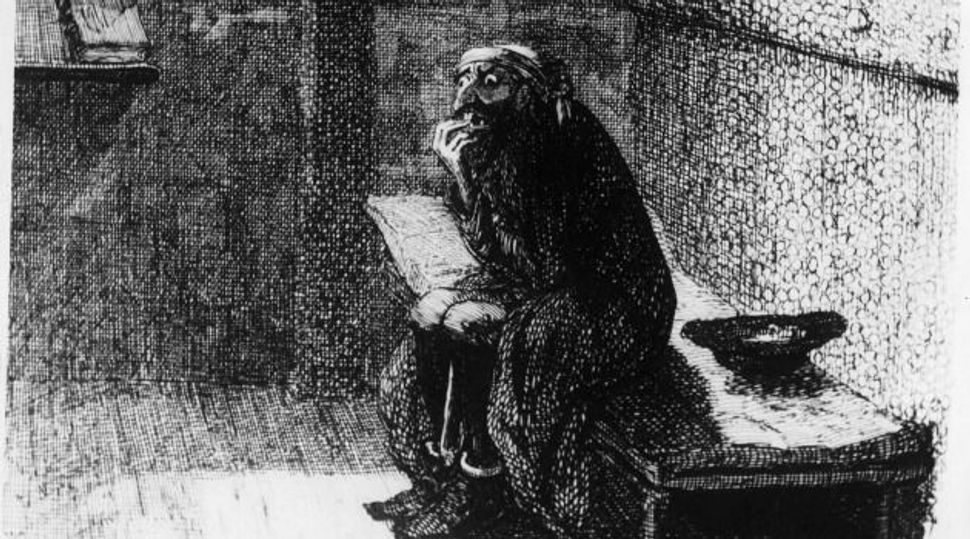 A DIckens of a Predicament: The character of Fagin in ?Oliver Twist? by Charles Dickens is symptomatic of the stereotyping of Jews in English Lit. Image by George Cruikshank

American book mavens who have delighted in growing up reading works by zesty authors who have a strong sense of Jewish identity, such as E. L. Konigsburg and Maurice Sendak, should be aware that readers in other countries are not so lucky. Madelyn Travis, author of “Jews and Jewishness in British Children’s Literature,” is a “secular Jewish New Yorker living in London,” where she is an associate research fellow at Birkbeck, University of London. Interviewing noted contemporary Jewish authors for children, Travis was surprised to find them few, as well as somewhat ambivalent about questions of identity. ​Leon Rosselson, born in 1934 to a family of Russian Jewish refugees, is an English folksong writer and children’s book author. His 2004 book “Home Is a Place Called Nowhere” analyzes the refugee experience. Yet when asked by Travis to define today’s British Jewish sensibility in his books, Rosselson found the question unexpectedly challenging, replying: “If you’re religious, there’s no problem. If you’re not, what? A few Yiddish phrases and maybe fasting on Yom Kippur do not Jewish characters make. So in what would the ‘Jewishness’ of Jewish characters consist?”

Ann Jungman, who was born in London in 1938 to a German Jewish refugee family, confessed to Travis that during her own childhood, she “always wanted to be English. I hated being Jewish….The English ruled the Empire, were decent people, understood the rule of law, and you wanted to be one of them.” Fortunately, Jungman grew out of this early identity crisis, and in 2004 she published “The Most Magnificent Mosque,” set in Medieval Spain to show that there had been a tolerant society in Europe a “long time ago…. There is no reason why Jews, Christians and Muslims can’t live side by side,” as she told The Jewish Chronicle. This stance gave Jungman moral authority when she objected to “A Little Piece of Ground” by New Zealand author Elizabeth Laird, a controversial children’s book describing the intifada on the West Bank. Jungman told the newspaper The Guardian: “There should have been a broader picture. All the Palestinians are reasonable, and all the Israelis are monsters.”

Monstrous caricatures of Jews are nothing new in British literature, as Travis reminds us, in the tradition of Shakespeare’s Shylock and Dickens’s Fagin in “Oliver Twist.” And children’s literature only follows suit. Starting in the 18th century, British children were trained in a tradition of anti-Semitism by such authors as Isaac Watts (1674–1748), a celebrated hymn writer and theologian whose “Divine Songs Attempted in Easy Language for the Use of Children,” a 1715 collection of didactic poetry, features a tenderly loving nurse offering a “Cradle Song” that musters up hatred for Jews as Christ-killers:

Yet to read the shameful story, How the Jews abus’d their King; How they serv’d the Lord of glory, Makes me angry while I sing.

This sentiment was echoed by another aspiring educator, John Vowler. In in his 1743 “An Essay for Instructing Children on Various Useful and Uncommon Subjects,” Vowler attributes the martyrdom of the Apostle James to violent Jews:

James minor gospel truths bravely maintains Till with a club the Jews beat out his brains.

Yet even early on, there was opposition to such offensive stereotypes. When Maria Edgeworth (1767–1849), an author for children and adults who was called the “Irish Jane Austen,” wrote of the “knavish propensity” of Jews, an American Jewish reader named Rachel Mordecai complained that Edgeworth was an advanced thinker except for this point of view: “How can it be that [Edgeworth], who on all other subjects shows just justice and liberality, should on one alone appear biased by prejudice: should even instill that prejudice into the minds of youth!… Can it be believed that [Jews] are by nature mean, avaricious, and unprincipled? Forbid it, mercy.” To which Edgeworth admitted that her viewpoint was colored by children’s books she had read in which Jews are “invariably represented as beings of a mean, avaricious, unprincipled, treacherous character.”

Famed children’s author E. (Edith) Nesbit’s “Story of the Treasure Seekers” (1899) describes a greedy moneylender, Mr. Rosenbaum, as a “little old gentleman with a very long black coat and a very long white beard and a hookey nose — like a falcon.” Yet in another children’s book, “Harding’s Luck” (1909), Nesbit wrote with grudging admiration of a Jewish florist: “The sense of romance, of great things all about them transcending the ordinary things of life — this in the Jews has survived centuries of torment, shame, cruelty, and oppression.” What changed the mind of Nesbit (1858–1924), who in addition to her writing was a socialist activist and co-founder of England’s Fabian Society? Surely she had read about the increasingly murderous anti-Semitic pogroms in Russia, whether the 1903 Easter pogrom in Kishinev or the 1905 Odessa pogrom. This legacy of violence against Jews might explain Nesbit’s sympathetic evolution on the subject.

Other writers were more open-minded to begin with, such as Lewis Carroll, who distributed free copies of his “Alice in Wonderland” to hospitalized children. When asked whether copies should be distributed at a London Jewish hospital, he commented: “Why in the world shouldn’t little Israelites read ‘Alice’ as well as other children?” Less open-minded was Beatrix Potter, who, in “The Fairy Caravan” (1929), about a guinea pig that runs away from home to join a circus, includes among the anthropomorphized animal, a greedy hoarder of a starling with the Jewish-sounding name of Ikey Shepster.

Surprisingly, the Holocaust did not mark an end to these British stereotypes, and Travis decisively contradicts George Orwell’s overly optimistic 1945 essay “Anti-Semitism in Britain,” which asserts that nasty Jewish stereotypes disappeared from British popular culture “after 1934.” These negative images proved durable, and in 1959, Iona and Peter Opie’s “The Lore and Language of Schoolchildren” noted that “children colloquially refer to a Jewish person as a Yid, Shylock, or Hooknose.”

Small wonder that in recent years controversy has erupted, as when the British Jewish journalist Dina Rabinovitch (1963–2007), daughter of Israel’s Rabbi Nahum Rabinovitch and wife of the lawyer and historian of anti-Semitism Anthony Julius, interrupted her chronicle of an ultimately unsuccessful struggle against breast cancer to criticize a children’s book. “Not the End of the World” (2005) by the British writer Geraldine McCaughrean told the story of the biblical Noah while attacking Judaism as a patriarchal religion. Rabinovitch lucidly commented that the book offered a “jaundiced view of Old Testament religion,” adding:

“Noah and his family are described as practising Jewish law (there are references, for instance, to circumcision and the prohibition of the making of images). Yet, according to biblical chronology, Noah comes long before the commandments (and Abraham, later in the book of Genesis, is the first to be circumcised). So while claiming to be ‘real’ the tale avoids being firmly rooted in any contextual reality and its own source material.”

“Jews and Jewishness in British Children’s Literature” implies that such misunderstandings and misreadings are likely to continue in the foreseeable future.

Searching For Jews in British Children’s Literature Beyond the Stereotypes