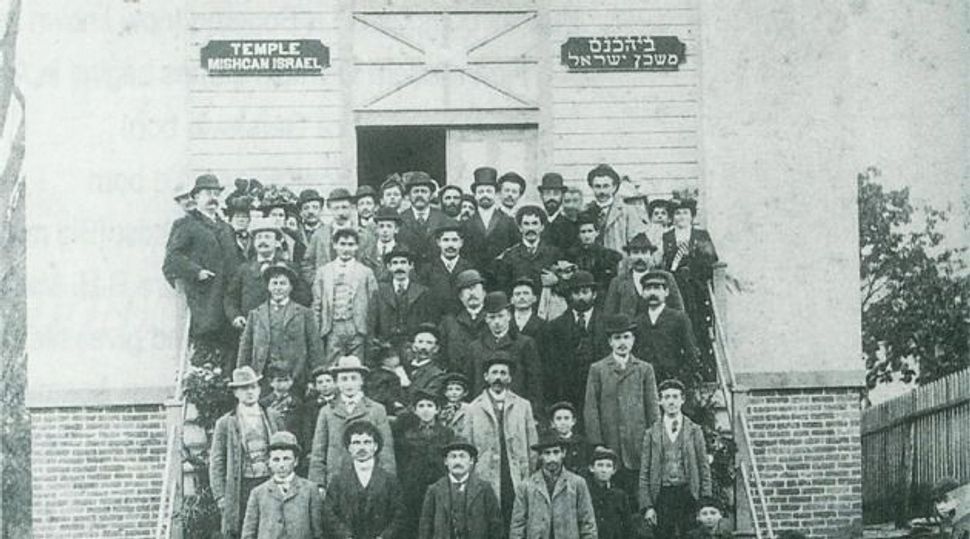 Now and again, I find myself in a synagogue that really tugs at my heart. The last time that happened was six years ago, when I first came upon the Sixth & I Historic Synagogue, in downtown Washington, D.C., or, to use its original name, Congregation Adas Israel. This time, the synagogue that caught my eye was Temple Adas Israel. Located in the former whaling town turned popular summer resort of Sag Harbor, on Long Island, it is, reportedly, “Long Island’s oldest Jewish congregation.”

These two houses of worship share more than a common Hebrew name. Both date back to the closing years of the 19th century and have weathered the passage of time. What’s more, the two institutions are at once studies in persistence and exercises in transformation whose fate is bound up with that of their immediate surroundings.

It wasn’t whaling that brought Jewish settlers to the town of Sag Harbor, it was industry: the opening of a watch case factory in the late 1880s. Providing gainful employment to an estimated 40 to 50 recently arrived Eastern European Jewish immigrants, the plant boasted a “muscular brick architecture” that is currently in the process of being transformed into luxury condominiums.

One can only imagine the disorientation of these immigrants as they made their way from Eastern Europe to Eastern Long Island, where they were far outnumbered by lobsters and fishing boats. Adjusting to their new surroundings took some doing, but eventually, after getting their bearings, Sag Harbor’s newest residents established a synagogue that they called Mishcan Israel, and a burial society, the Chevra Kodetia Society. (Transliteration, it would seem, was not their strong suit.) Later still, their ranks were augmented by a number of aspiring farmers who were introduced to the area by the Jewish Agricultural Society, as well as by several merchants whose mom and pop stores lined Sag Harbor’s Main Street.

The synagogue that these shopkeepers, farmers and factory hands erected in 1898 and dedicated two years later fit right into the town. What characterized its modest precincts — the language of prayer; the lacy fretwork that adorned the top of the ark; a balcony, reminiscent of the deck of a ship, to accommodate female congregants who sat apart from their men folk — distinguished its worshippers from those who filled the pews of the nearly Protestant and Catholic churches.

Externally, though, Mishcan Israel was of a piece with its neighbors. Like Sag Harbor’s other houses of worship,

it was fashioned out of wood and painted a crisp white. Passersby would be hard pressed to distinguish it from a church. You had to look up, toward the roofline, to make out a Star of David etched in a topmost window.

Never too large or stable to begin with, the congregation’s membership fluctuated along with the tides. Unable to afford a full-time rabbi, the synagogue held services just on the Sabbath, and then, as its ranks continued to thin, only on the High Holy Days. There was even a moment in its history when, to accommodate a visiting rabbi who had his own flock to tend to on the Sabbath, congregants were wont to hold Sabbath services on a Thursday.

As time passed, the congregation changed its name to Temple Adas Israel, affiliated with the Reform movement, and expanded its footprint to include a social hall. Still, it was not exactly the most robust of institutions. In fact, it barely held on.

Of late, the growing appeal of the Hamptons has brought lots of affluent new homeowners to the area. Sag Harbor, and with it Temple Adas Israel, is a beneficiary of this sea change in the town’s fortunes. It used to be that “summer resort Judaism,” as one of its critics put it early in the 20th century, spelled the temporary abandonment of organized Jewish life. Happily, that is no longer the case. “Summer resort Judaism,” even in Sag Harbor, now encompasses numerous opportunities for engagement, from classes and summer camps to Sabbath services on the beach. Under the direction of a charismatic, imaginative — and, yes, full-time, year-round — rabbi, Leon Morris, Temple Adas Israel is now awash in activity.

Time will tell whether this generation of Sag Harbor residents will develop more than a seasonal fidelity to the synagogue. All I know is that the experience of sitting in Temple Adas Israel’s intimately scaled sanctuary, which was erected more than a century ago and at great financial and emotional cost to its members, and listening to the swell of sound that emanated from every corner of the room, was as heartening, and invigorating, as a sea breeze.