How Nicholas Sparks Came To Write His First Jewish Characters 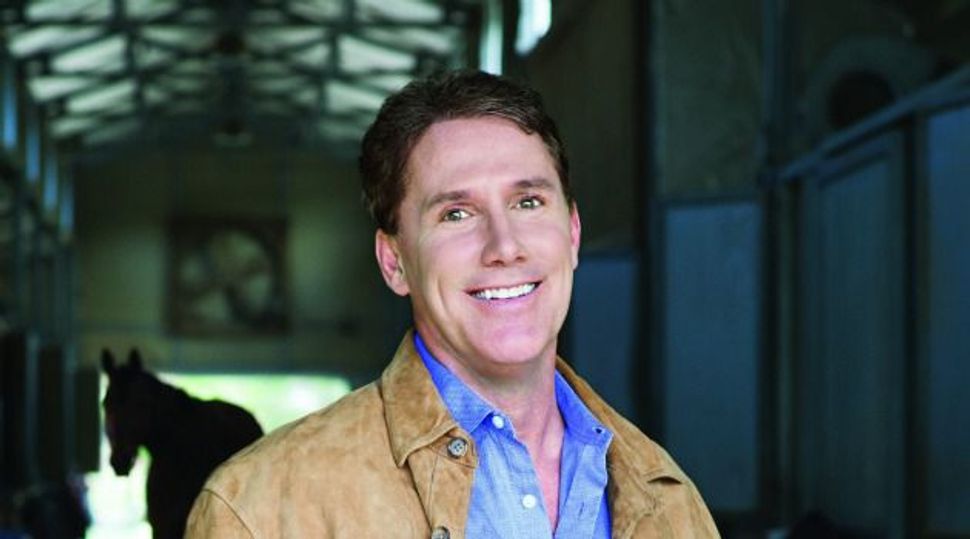 Can?t Start a Fire: Nicholas Sparks?s latest novel, ?The Longest Ride,? opens with the voice of 91-year-old Ira Levinson, a Jew from the south. Image by Nina Subin

‘I sometimes think to myself that I’m the last of my kind.”

And thus begins “The Longest Ride,” Nicholas Sparks’s latest novel. Sparks has written seventeen novels, eight of which have already made it to the silver screen.

“My name is Ira Levinson. I’m a southerner and a Jew, and equally proud to have been called both at one time or another.”

Levinson, 91, is trapped in his car, which has skidded down an embankment. He has no idea when or even if he will be rescued. In his delirium, he keeps up a conversation with Ruth, his wife of 55 years, who died nine years ago.

The Levinsons are Sparks’s first Jewish characters. “I wanted to do something to keep my stories fresh and original for the reader,” Sparks explained in a telephone interview from his home in New Bern, N.C. “I think they’re going to love these characters. They’re just great, great characters.

Though he has never written Jewish characters before, the Levinsons are typical Sparks creations in at least one important way. The protagonists in all his books — from “The Notebook” in 1996 to later titles such as “Message in a Bottle,” “A Walk to Remember” and “Nights in Rodanthe” — find a fairy tale love and happiness.

And so it was with the Levinsons, whose marriage was seemingly bashert. He was the son of a Greensboro, N.C. haberdasher. She was the descendant of refugees from post-Anschluss Vienna by way of Switzerland.

They met when she was 16, shortly after she arrived in the States. Ruth and her mom walked into the Levinsons’ store, and it was kismet. They went to the same synagogue and walked home together on the Sabbath. There was never any doubt that they’d be married and live happily ever after. Their love would ultimately impact the relationship of the novel’s two other principal characters, Sophia, a senior art major at Wake Forest University, and Luke, a rancher and professional bull rider.

Though romance is a constant in his work, Sparks, 47, does not consider himself a romance writer. “It’s an inaccurate term to describe my work,” he said. “Romance novelists have a specific structure and very strict rules they follow.

“My books don’t fall into what romance novels are. Family dramas, Southern literature, love stories, are a lot of terms that are more accurate.”

I told him that the term “romance” was not meant in a pejorative way. Certainly his books are full of romance. He agreed, sort of.

“Romantic elements are part of my books,” he said. “But I write novels that cover a lot of different emotions and my goal really as a writer is to accurately reflect all of those emotions — happiness, fear, loss and betrayal. I want to make all of these emotions come to life so that the reader feels he knows all of these characters.”

I asked if he was familiar with the word bashert, and explained that it’s often used to refer to one’s predestined soul mate. I wondered if he believed in that kind of love outside of novels.

“I think romance is alive and well,” Sparks responded. “I think that feeling is a universal human experience. When you meet the person you are meant to be with, there’s this overwhelming feeling that this was preordained.”

“I can tell you that from my own experience. I met my wife on spring break in Florida. I was down with my friends, and I saw her walking through a parking lot. If we had stopped for one more red light, we never would have met. Was that preordained?”

Sparks’s father was a college professor who taught business and public administration. Sparks was raised Catholic and attended the University of Notre Dame on a full track and field scholarship.

Yes, he had Jewish friends growing up. And yes, he attended several bar mitzvahs — “though strangely I’ve never been to a Jewish wedding,” he remarked.

Sparks said that Ira Levinson was based on someone extremely close to him, a Jewish man who became almost a surrogate grandfather. After Sparks’s grandparents divorced, his grandmother moved to San Diego, where she kept company with a Jewish gentleman.

“They went to Israel together, they had lunch together. We didn’t have a lot of money, so we’d vacation in San Diego and stay at Grandma’s house. I became very close to him. He was almost like a grandfather to me. He taught me how to snorkel. He taught me how to body surf, and was very much part and parcel of my life.”

“Ira was modeled on him, probably less in the religious aspect than the generational aspect. He was born in 1920, as was Ira.”

Sparks was already familiar with the Shoah. “I’ve always read a lot of history and World War II is one of my favorite periods of study. I certainly consider myself fairly well-read on the Holocaust.

“We started [the Epiphany] school here in my home town. The basis of it is love in the Christian tradition, and what we mean by that is you shall love God and your neighbor as yourself, which comes from Leviticus and the Gospel.

“Our sophomores read the ‘Diary of Anne Frank’ and ‘Night’ by Elie Wiesel. We fly them to Poland and they visit the Krakow Jewish quarter and Schindler’s factory and Auschwitz. It’s an independent school in the Judeo-Christian tradition.”

Interestingly, the school’s headmaster is Saul Benjamin, who is Jewish. In fact, Sparks works with numerous Jews, including his attorney and several of his agents. He used them to vet the authenticity of the Levinsons.

“My attorney told me, ‘My gosh, you wrote my parents.’ That was a wonderful feeling that I really got this right.”

How Nicholas Sparks Came To Write His First Jewish Characters