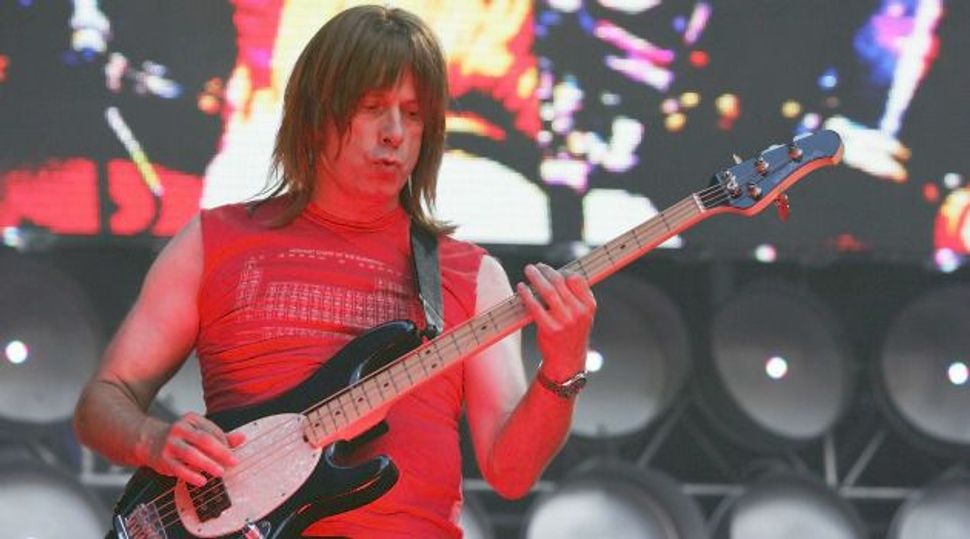 Rockin? in the New Year: Nigel Tufnell (aka Christopher Guest) is the co-author of ?Rock ?n? Roll Creation? one of many possible anthems to celebrate the New Year. Image by Getty Images

Rosh Hashanah, the Jewish New Year, is upon is. It’s a time to reflect and repent, to eat symbolic foods, to shake the sins from our soul and celebrate our special relationship with God, so that we may be signed and sealed in the Book of Life for a good and sweet New Year. It’s also a time to ROCK.

After extensive study of both the Talmud and hundreds of classic albums, we’ve come to the conclusion that a hitherto undiscovered link may exist between hard rock/heavy metal and Rosh Hashanah. Here, then, is our list of the top ten head-banging ways to wish your neighbors “Shanah Tovah” — as loudly as possible!

Cream — Sweet Wine One of the first truly heavy rock bands, British supergroup Cream recorded what could be interpreted as a tribute to Mogen David Concord Grape in 1966, though there’s some debate to this day as to whether drummer Ginger Baker — who co-wrote the song — ever actually recited Kiddush while enjoying said beverage.

Steppenwolf — It’s Never Too Late Rosh Hashanah celebrates the birth of mankind — which is what Canadian/German biker rockers Steppenwolf were probably referencing when they titled their 1969 album At Your Birthday Party. “It’s Never Too Late,” the album’s standout track, finds ‘Wolf frontman John Kay musing wisely on the prospect of leaving one’s shortcomings and transgressions behind in order to start the New Year with a clean slate.

Spinal Tap — Rock & Roll Creation Though they’re technically not a “real” band, the Tap’s 1977 anthem was no doubt inspired by G-d’s creation of (and relationship with) mankind, while lyrics like “I turn within to see the forces that created me” and “I look in the mirror and see what I fear” seem to reflect the season of introspection and personal growth that Rosh Hashanah ushers in.

Grand Funk Railroad — Sin’s A Good Man’s Brother No high holiday would be complete without what Homer Simpson once termed “the wild, shirtless lyrics of Mark Farner,” and the opening song from 1970’s Closer to Home LP delivers the goods with the Grand Funk frontman’s pile-driving meditation on how the sins that we repent and make amends for are the product of man’s intrinsic imperfection.

Argent — Hold Your Head Up Rosh Hashanah can be translated as “Head of the Year,” which is why some eat the head of a fish or another animal during the holiday repast. Argent’s plodding 1972 hit can inspire us to look beyond the physical aspects of eating this sort of meal and instead consider its deeper symbolism.

Van Halen — Light Up The Sky Nice Jewish boy David Lee Roth seems to have been enchanted by the magic of seder candlelight when he wrote the lyrics to the heartfelt 1979 ode, which also features guitarist Eddie Van Halen doing his best six-string imitation of a shofar blast.

Sorcery — Sacrifice We’re pretty sure that Abraham’s near-sacrifice of Isaac what was on the minds of L.A. hard rockers Sorcery when they recorded this dramatic anthem for the soundtrack to the Biblically epic 1980 film Stunt Rock.

Def Leppard — Pour Some Sugar On Me It is a long-standing custom that sweet things should be eaten during Rosh Hashanah as a symbolic expression of wishes for a sweet New Year, a custom which seems to be cited by Def Leppard’s 1988 mega-hit.

Led Zeppelin — Custard Pie Ever the cultural adventurer, Robert Plant has surely attended a Rosh Hashanah dinner or two over the years, and availed himself thusly of some delicious dairy desserts — one of which we suspect may have inspired this funky opening track from 1974’s Physical Graffiti. “When you cut it mama, save me a slice,” indeed!

Dan Epstein is the author of Big Hair and Plastic Grass: A Funky Ride Through Baseball and America in the Swinging ‘70s. (Thomas Dunne Books, 2010)