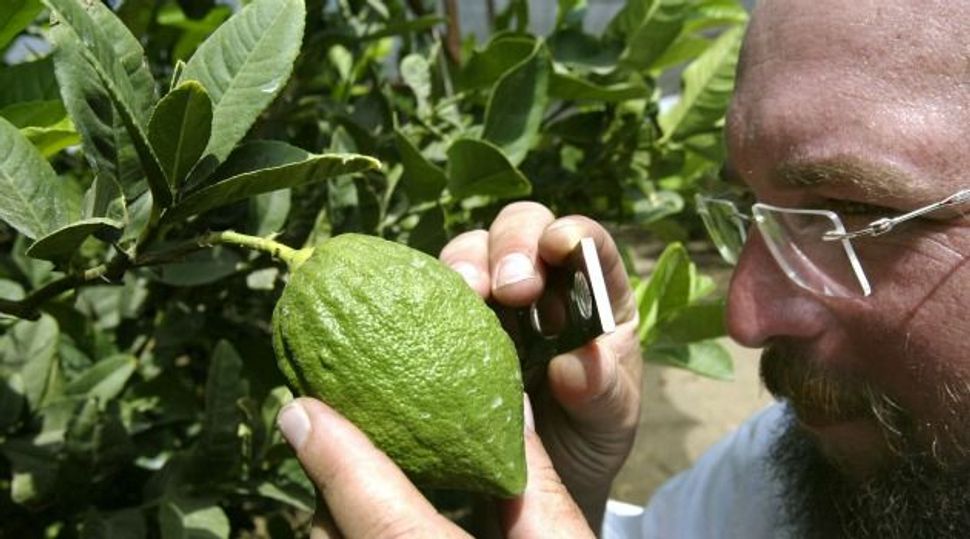 Examining The Etrog: Only in the Mishnah, redacted by the early rabbis in the third century C.E., do we first find the so-called ?goodly fruit? designated the etrog or citron. Image by Getty Images

Besides the sukkah itself, nothing is more associated with the holiday of Sukkot than the “four species” — the arba’a minim, as they are called in Hebrew. These are the etrog or citron fruit; the lulav or palm shoot, and the willow and myrtle branches in which the base of the palm shoot is set before it is blessed and waved in the synagogue.

Despite minor disputes over the ritual requirements for each of these items, Jews have agreed on what they are for roughly the past 2,000 years.

And yet when we look at the verse in the Bible commanding the display of the four species, Leviticus 23:20, the identity of three of them is far from clear. This verse reads, leaving the problematic parts of it in the original Hebrew: “And you shall take the fruit [p’ri] of ets hadar, fronds of palms trees, branches of an ets avot, and arvey naḥ al, and rejoice seven days before the Lord your God.”

This is strikingly at variance with a description in the somewhat later, fifth-century B.C.E. book of Nehemiah, in which Nehemiah tells the Judeans to celebrate Sukkot in Jerusalem with “olive leaves, and oil tree leaves, and myrtle leaves, and palm leaves, and the leaves of an ets avot.” By “oil tree” (ets shemen), Nehemiah, who lists five items rather than four, may have meant the resinous pine tree. (He couldn’t have meant the olive, which he had already mentioned.) No fruit is on his list at all.

And was the fruit of Leviticus really a citron? If one reads the passage there as though it were modern Hebrew, ets hadar means “a citrus tree,” this being the collective term for citrus trees today — and since the citron was the only known citrus tree in the Land of Israel in ancient times, the Bible would definitely have been referring to it. And yet this would be circular reasoning, inasmuch as ets hadar came to mean “citrus tree” in modern Hebrew only because of its traditional association with the citron. Taken literally, ets means “tree” and hadar means “splendor” or “majesty,” so that the biblical p’ri ets hadar simply means either “the fruit of a splendid tree” or “the splendid fruit of a tree.”

This is exactly how the third-and-second-century-B.C.E. Greek Septuagint, our oldest record of Jewish biblical interpretation, translates it with karpos horaios, “splendid [or “goodly”] fruit.” Just what this “goodly fruit” was, the Septuagint does not say; presumably, it could have been anything ripening around Sukkot-time, such as dates, pomegranates or late figs. Only in the Mishnah, redacted by the early rabbis in the third century C.E., do we first find this fruit designated the etrog or citron. A native of East Asia, the citron may have arrived in Palestine after the period of the Septuagint. Not as beautiful to look at as the pomegranate, and inedible unless made into a conserve, it was chosen as “the goodly fruit” by the rabbis for its divine smell.

The ets avot, or “thick tree,” whose branches accompany the “goodly fruit,” is equally nebulous. The Septuagint translates the term as kladoi xulou daseis, “thick branches of trees.” A klados is most commonly the branch of an olive tree, which is consistent with the verse in Nehemiah; yet though a thick olive branch may have been practical if placed in the Temple before its destruction in 70 C.E., it would have been ungainly to bring to a synagogue in rabbinic times. The rabbis, therefore, interpreted ets avot as a tree with dense branches and identified it with the hadas or myrtle. This is a seemingly puzzling choice, since myrtles, though densely branched, commonly grow as bushes, not trees. The explanation would seem to be that there was a desire to reconcile Leviticus with Nehemiah, and that possessing an old tradition that the myrtle was one of the four species, the rabbis took it to be the ets avot, even though Nehemiah lists them as two different plants.

This brings us to Leviticus’s arvey naḥ al. Naḥ al is biblical Hebrew for a winter stream that runs dry in summer but still has underground moisture, and arava is the name of a tree that grew by such a watercourse. Here, the rabbis and the Septuagint saw eye to eye that this “tree of the stream” was the willow (Greek itea). Yet there was also a tradition, strong enough for the rabbis to have to warn against following it, that the arava was a poplar — and just to confuse things more, in Hebrew’s sister language of Arabic the word for poplar is gharb, a cognate of arava, while the word for willow is safsaf, akin to Hebrew tsaftsafa, which means poplar!

At least there’s no dispute about the palm branch. Leviticus, Nehemiah, the Septuagint and the Mishnah all agree on it. Count me in, too.