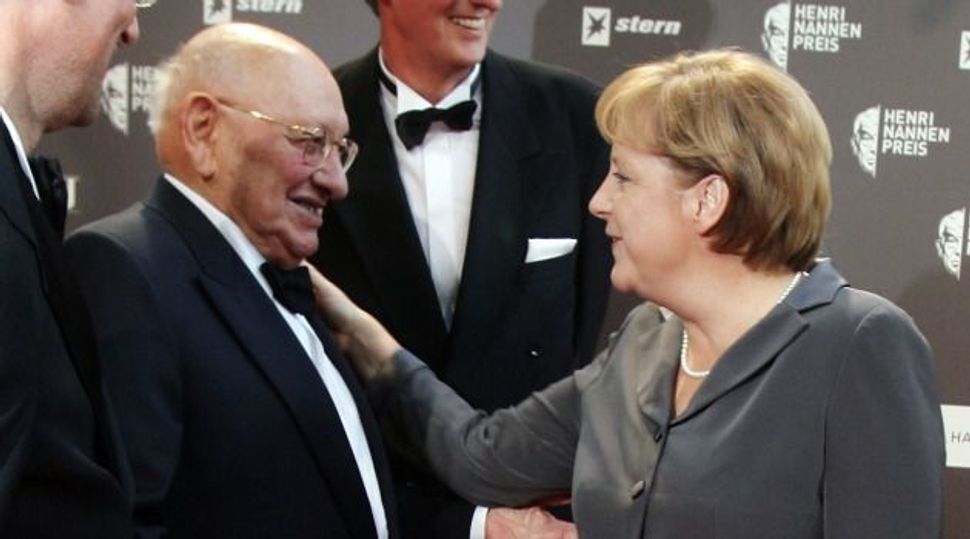 A memoir, “The Author of Himself: The Life of Marcel Reich-Ranicki published by Princeton University Press in 2001, recounts the unlikely story of how a Polish Jewish escapee from the Warsaw Ghetto managed to become the so-called “Pope of Literature” (Der Literatur-Papst) in postwar Germany. The critic Marcel Reich-Ranicki, who died yesterday at the age of 93, was born Marceli Reich in 1920, of Polish-German Jewish heritage in the northern Polish town of Włocławek. In 1929 he moved to Berlin, but was deported back to Poland by the Nazis in 1938, and by 1940 was interned in the Warsaw Ghetto. There, of a critical nature, he penned often-harsh music reviews for the local Gazeta Żydowska (The Jewish Newspaper). One such, of a Saturday morning concert in 1942, castigated a performance of Tchaikovsky’s Violin Concerto by soloist Zygmunt Lederman, a chamber music partner of Władysław Szpilman, whose story inspired the Oscar-winning 2002 film “The Pianist.” Reich-Ranicki’s critique stated that he was “especially bothered” that the first movement was “too sweet” and the second “too superficial.” Nor was he overly impressed by a Beethoven Seventh Symphony conducted by the Polish Jewish composer Marian Neuteich (1890 – c.1943), who would be murdered the following year in the Trawniki concentration camp, southeast of Lublin.

Reich-Ranicki, who escaped to the German side of Warsaw before the Ghetto was destroyed, became a postwar specialist in German literature in postwar Poland. He joined the Polish People’s Army in 1944 as a censor in the Communist secret police. After a stint in London as Polish consul-general and intelligence operative (using the alias Ranicki), he fell afoul of official anti-Semitism, and was accused of “cosmopolitanism,” a notorious euphemism for Judaism. Resurfacing at the Polish Defense Ministry, he promoted East German writers, signing articles with his spy alias, Ranicki. In 1958 he moved to Germany, where his editor at the Frankfurter Allgemeine Zeitung (FAZ) newspaper suggested that his pen name should be the Marcel Reich-Ranicki, which it remained. Reich-Ranicki became a multi-media celebrity with a hit TV show, whose fame endures to this day (“The Author of Himself” was filmed for German television in 2009 as “My Life,” by the Tel Aviv-born Israeli director Dror Zahavi, himself long based in Germany).

Reich-Ranicki’s stint from 1988 to 2002 as curmudgeonly host of “The Literary Quartet,” a German public TV offering, cemented his fame, and an even longer running feature for FAZ, “Ask Reich-Ranicki” was a kind of Bintel Brief about books, reinforcing his supposed omniscience about all things literary. One 2011 column described a 1965 visit to the home of the German Jewish poet Nelly Sachs, a resident of Sweden who would win the Nobel Prize the following year. Reich-Ranicki found the elderly Sachs hampered by a “very serious mental condition” and “severely limited sanity,” complaining of being “persecuted and terrorized” by radio waves sent by an illegal German Nazi organization which was barely reined in by the Swedish police. Uncharacteristically, Reich-Ranicki decided not to report on his visit with Sachs at the time, waiting until decades later to do so.

It was not in Reich-Ranicki’s nature to remain silent. “A History of German Literary Criticism, 1730-1980” from the University of Nebraska Press describes Reich-Ranicki’s “own combative personal perspective” that criticism could “encourage certain kinds of literature and prevent others from coming into existence. Thus [Reich-Ranicki] created a fictional literary republic whose citizens — the reading public — seek access to literature under the guidance of critical opinion leaders and more or less dictate their esthetic desires to the producers.” Perhaps reflecting his earlier experience as a Communist censor, met by the German penchant for following orders, Reich-Ranicki’s dicta were lapped up by a nation, even when he aggressively slated all of German TV in 2008. At the German Television Awards in Cologne, where he was presented a lifetime achievement award, Reich-Ranicki snapped, “I don’t belong here among all this rubbish,” and the cowed audience meekly applauded in agreement.